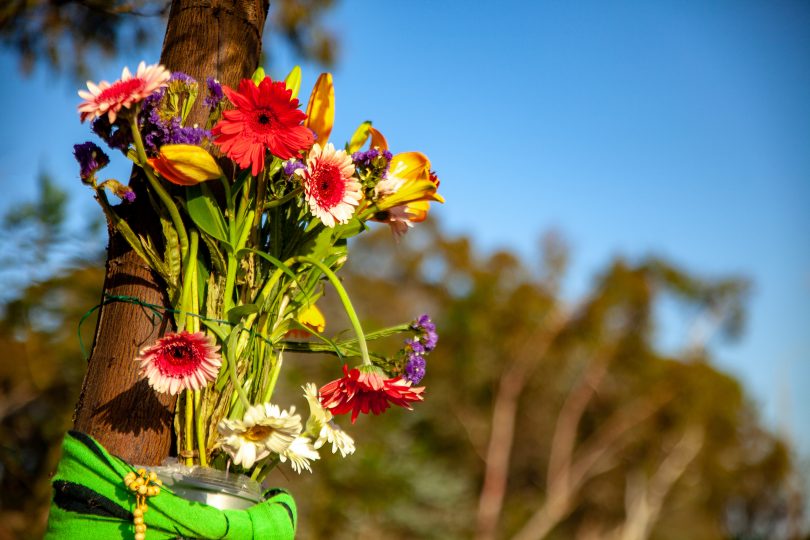 Flowers have been placed on a tree on Belconnen Way at the scene of the crash. Photo: George Tsotsos.

A distressed woman has shared her concern about the dangers of walking across Belconnen Way after her partner’s life was cut short in a fatal accident last Friday (4 January).

Around 8 pm, Justin was hit by a car as he was crossing Belconnen Way on his way to buy groceries at Jamison Plaza. He was treated at the scene by ACT Ambulance Service before being taken to hospital where he died a short time later.

His partner Tanya shared the story of her loss with Region Media and said her life had changed since the day they first met.

“Justin was here and now he is not,” she said, her voice breaking. “His shoes should still be under our bed with him snoring above.

“It’s just a shock. He just walked out the door and he never came home again. We only knew when we got a knock on the door from police.”

Tanya remembers her partner as a funny, athletic man, a passionate Canberra Raiders fan who used to play rugby league with his local club Gungahlin Bulls.

“We used to talk about having rocking chairs together and growing old together. My life changed when I met him,” Tanya shared. “He used to take my kids to football. He had a heart of gold and he would do absolutely anything for anyone.

“He adored my two children. My 18-year-old son, who has a disability, used to come up to Justin every day and hug him and say, ‘Justin, you are amazing and you are so funny’.”

Tanya is concerned about the dangers of crossing Belconnen Way and has warned pedestrians about making the dash across the lanes.

“I see people walking across the road there all the time where there is a goat track that leads to the road. We use that path all the time because it saves time,” she said.

“I hope people will stop crossing there because it is too dangerous.”