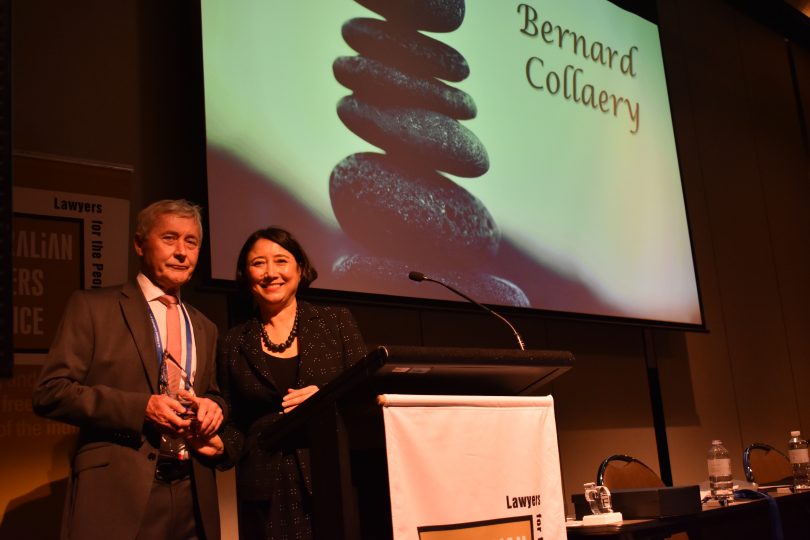 Bernard Collaery and Noor Blumer at the award presentation in Melbourne. Photo: Supplied

The Canberra lawyer charged with breaching the intelligence act after helping to expose Australia’s spying on East Timor has won the Australian Lawyers Alliance (ALA) 2018 Civil Justice Award.

Bernard Collaery, a former ACT Attorney-General and respected advocate, and his client, a former ASIS spy known as Witness K, were charged over revealing information about ASIS’s spying operation in East Timor, where cabinet rooms were bugged. The matter is still before the court.

Mr Collaery has been recognised for his work in fighting for justice for the East Timor people, and was presented with the Civil Justice Award at the ALA National Conference in Melbourne on Friday (19 October).

ALA National President Noor Blumer, also from Canberra, said Mr Collaery had spent many years advocating on behalf of the people of Timor-Leste and was legal adviser to the National Congress for Timorese Reconstruction (CRNT) in the critical period leading up to formal independence in 2002.

“Bernard Collaery is a truly deserving recipient of our 2018 Civil Justice Award,” Ms Blumer said. “He has shown great courage and integrity in his dealings on behalf of the Timor-Leste people and more recently in acting for Witness K.

“Mr Collaery’s work in fulfilling his professional obligations to Witness K has resulted in significant and ongoing personal cost. He has been the subject of a prosecution and he has been denied his right to make public comment on the administration of justice in relation to his case.

“His commitment to ensuring justice for his client and the people of Timor-Leste, in light of the personal risks involved, is admirable.”

In addition to his international work, Mr Collaery has a long history of representing plaintiffs in Australia to ensure they receive justice. Mr Collaery represented the families of the deceased in the 1997 Thredbo landslide coronial inquiry, he represented various landholders in the compensation claims after the 2003 Canberra bushfire and argued for damages for the family of Katie Bender who died in the Royal Canberra Hospital implosion.

Ms Blumer is a director of Blumer Personal Injury Lawyers.

Katie Bender, in our hearts always