Best of Canberra Taste Off – Dumplings

My friends and I regularly find ourselves hotly debating who serves up Canberra’s best dumplings and this week’s Taste Off revealed that the same is true for RiotACT readers.

Votes came in for a few restaurants I hadn’t heard of before, like Top Taste in Woden, Dumpling Inn at Jamison, Beijing House in Hawker and Jade Dumpling Noodle House in Gungahlin. There were also quite a few votes for Dickson Dumpling House and CBD Dumpling House, but the favourites were undoubtedly Shanghai Dumpling Cafe on Childers Street near ANU and the newly arrived Akiba on Bunda Street in the city.

First up was Shanghai Dumpling Cafe, which received the most votes but also caused the most controversy. It seems that everyone has an opinion on Shanghai Dumpling – there are lots that say it’s good, but those who don’t like it, really don’t like it. I’ve spent many an evening there, eating dumplings and drinking cheap wine from their ceramic tea cups. I, personally, am a pretty big fan. While their customer service isn’t crash hot, their dumplings are good and you can get a plate full of them for pretty cheap. My favourite is the steamed vegetarian dumplings with sauce and, as always, they didn’t disappoint. I don’t know what they put in that sauce, but it takes dumplings to a whole new level. 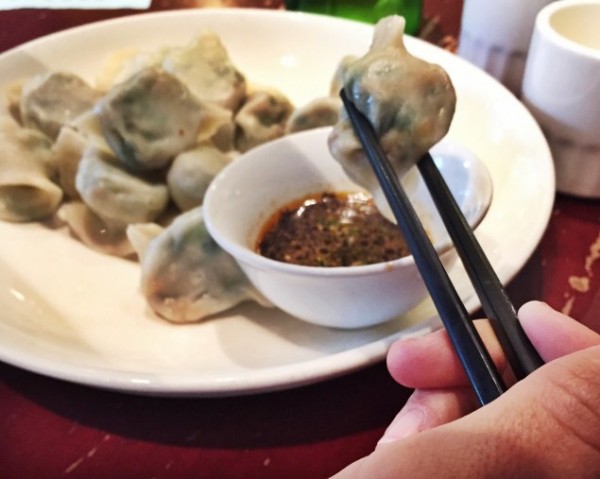 Next stop was new kid on the block, Akiba. Akiba only opened in December last year and their dumplings have already made a name for themselves. It was my first time at Akiba and the experience lived up to the hype. The place has a great vibe, the staff were fun, the music was good and they also make a killer cocktail. We were handed menus and the first thing I noticed was that they don’t have a big range of dumplings. However, I’m not one to turn down a recommendation and someone had suggested the shiitake and water chestnut dumplings were the best they had tasted outside of China Town. I was impressed, they were delicious and the red vinegar and chilli oil sauce was on point – can you tell I like my sauce?

Picking a winner this week was difficult. On the one hand, Shanghai Dumpling Cafe has an enormous range of dumplings and is much cheaper. You can get 15 dumplings for as cheap as $11.50, but their customer service and general vibe is considerably lacking. Akiba, on the other hand, is the outright winner when it comes to good vibes and friendly service, but their range of dumplings is small and you only get four, albeit large, dumplings for $10.

When it comes down to dumpling vs. dumpling however, I think Akiba has it. Akiba’s dumplings, with their shiitake goodness and slight water chestnut crunch, are wrapped in a light translucent dough that really hits the mark. While Shanghai Dumpling is the place for good, cheap and cheerful dumplings, Akiba is this week’s winner.

The problem with Shanghai Dumpling Inn, is that it’s hit and miss. Some nights it’s fantastic and others just appalling. When they first opened though the food was absolutely fantastic.

I think the best place I’ve been to thus far for dumplings and food generally is CBD dumpling house in CIVIC. Fast, speedy service and the the food is to die for!

btw To experience something much closer to the real Shanghai dumpling experience try any of the dozens of restaurants and holes in the wall lining the Hume Highway in Ashfield Sydney.

Part of the problem may be that Shanghai is a poor cousin to Cantonese and Beijing cuisine, but seems to appeal to the tastes of those who queue for their chips on a stick or Jazz Apple cupcakes.

Who knows maybe next year I’ll get motivated enough to have pierogi stall at the Multicultural Festival. They go down particularly well with giant cans of Zywiec beer

Sorry mate, and no offence intended, but I’ve always been warned against eating yellowsnow.

Who knows maybe next year I’ll get motivated enough to have pierogi stall at the Multicultural Festival. They go down particularly well with giant cans of Zywiec beer

Hearing people say that Akiba has the best dumpling is very sad. The truth is, there’s no good dumplings in Canberra. But the best of the worse is Spicy Ginger dumplings.

I tried Shanghai the other day and quite liked it, but much prefer Chinese Kitchen Dumpling House in Woden.

What a taste off! Shanghai Dumpling and Akiba are two of my favourite places to eat, so glad they both got a mention.

On a non-dumpling related note, the kingfish sashimi at Akiba is great too.

May Agnew - 5 minutes ago
I am being blocked from SHARING my above comment -not allowed to speak the truth these days --WHAT NEXT ?? View
May Agnew - 8 minutes ago
Turning the beauty of Canberra into a concrete jungle now and to think that so many hard workers who built this beautiful cit... View
Jamie Peterson - 3 hours ago
This article is the same as a puff piece for Andrew Barr 😂😂😂😂😂😂😂😂😂😂😂😂😂😂😂😂😂... View
Lifestyle 65

Rachel Howard - 60 minutes ago
Lethal. But fun. View
May Claydon - 4 hours ago
When will they be in Woden and Tuggeranong. They are not in Canberra. Only Nth Canberra... View
Tom Adam - 4 hours ago
Elroy, 😆 it is on the news. My remark is that a pair of non-Canberra businesses are getting so much free advertising from... View
News 33

Hot in the City: Feast high tea-style around a Lazy Susan at Yum Cha CBD