Best spots for the turning of the leaves? 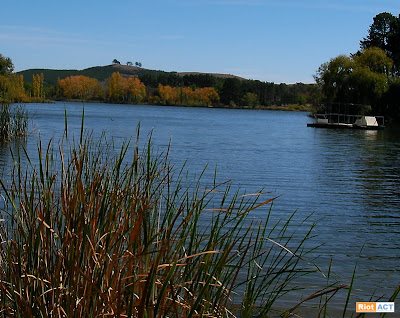 So Canberra’s deciduous foliage is pretty much at its autumnal best at the moment.

For those looking to get out and about admiring the pretty colours where are your favourite parts of town at this time of year?

16 Responses to Best spots for the turning of the leaves?
Filter
Showing only Website comments

Mrs Berra and I like getting up to Mt Ainslie on a crisp clear day towards the end of autumn, thermal mug of coffee in hand. The many colours of Canberra really stand out from up there.

This book has a list in the back of tree varieties planted in the streets of Canberra. I own a copy but don’t have it at the moment 🙁 Great book.

Anyone know of a street in Canberra with Trident Maples (Acer Buergerianum)? I’m currently landscaping my yard and looking for a tough, deciduous tree, and would like to see a mature one in colour.

Yep, can confirm from first hand experience there is lots of reddish dirt at Red Hill.

I agree the old inner city suburbs are good for the trees, and also around Yarralumla.

I do love the view on Barry drive as you crest the hill and get a nice view of the treetops in Turner, O’Connor and Lynham.

Other than that, Barton and the Parliamentary Triangle have some nice spots.

The “Red” in Red Hill seems to imply the redness of the deciduous trees, but apparently it’s not, because the suburb was named so before those trees were prevalent in the suburb. There’s a rumour that it actually refers to the red clay found in the area, but then no one has been able to confirm this either.

I can’t quote a source but I grew up in Canberra and that’s what I’ve always been led to believe.

If you’re up for a bit of cycling, one of the best views in Canberra IMHO is on the section of cycle path between Scrivener Dam and Glenloch Interchange. There is a creat little spot to stop and admire at the top of the hill.

I love the area around the “John Knight Memorial Park” on lake Ginninderra. I must try to get out there with my picture box soon.

Cotter bend is lovely any time of year and with the newish paths easy to get around. Lots of ducks too – as I know Rioters like to see the ducks about. The BBQs have less wee on them than others about town too.

Alongside the lake, esp in front of the National Library and the Gallery.

Red Hill Drive that overlooks the suburb of Red Hill (the redness of the leaves should be at its peak in the next week or two).

The “Red” in Red Hill seems to imply the redness of the deciduous trees, but apparently it’s not, because the suburb was named so before those trees were prevalent in the suburb. There’s a rumour that it actually refers to the red clay found in the area, but then no one has been able to confirm this either.

But, whatever history might hide, head for the Red Hill for the beautiful reds.

I reckon all around the Woden cemetery is nice – very peaceful, too!

Wow! great shot. is that down on the lake in that pretty little weed encircled bay near Yarramundi reach?

Dunrossil Drive. Park down the end near the GG’s house, dawdle over the bridge, walk along the lake, browse the nursery, wander back.

Tim Cole - 9 minutes ago
Basically what he said. If you were to run a major arterial to the south of Jerra, then it would draw more traffic through th... View
Ashley Wright - 37 minutes ago
Phil Hopkins Lets get real. Jerra is broken into sections that in other locations would be called suburbs. The main road spli... View
Dave Wilkinson - 44 minutes ago
All great until you hit the roundabout at red rooster .then your stuffed..soooo dangerous to turn right onto kings highway View
News 6

Pip Cleary - 16 minutes ago
We drove down on the weekend and had mobile reception (Telstra) nearly the whole way down. I presumed it was because of the l... View
Ricky Toms - 1 hour ago
Hopefully Vodafone View
Ann Parker - 5 hours ago
A lookout would also be lovely View
Opinion 31

Russell Kindervater - 20 minutes ago
Tell the Canberrans who lost their bus services for no apparent reason how good Barr is . Two buses serving Lyons Chifley Pea... View
John Elliott - 2 hours ago
I used to vote Labor when Jon Stanhope was running the show and I voted for Katie in 2012 ... But the current Labor leader Do... View
Michael Quirk - 6 hours ago
Barr is no visionary. He makes decisions without evidence. Stanhope is right to expose... View
Community 9

Marea Fatseas - 10 hours ago
Ashley Wright sorry, can you please explain how it makes sense to make Canberra a magnet for waste from interstate? When I lo... View
Ashley Wright - 13 hours ago
Alex Troy Elsworth Adkins it makes sense to me too. But FYI the sidings have long been removed. The space is still there to p... View
show more show less
*Results are based on activity within last 7 days

A troop of former Australian War Memorial officials opposed to its controversial $500 million redevelopment will line up before a...
Opinion 31

There is a convention that former political leaders are supposed to stay out of the spotlight once they have left...
News 41

@The_RiotACT @The_RiotACT
If you've been looking for a brand new townhouse in North Canberra, take a look at everything on offer at The Ridge in Watson https://t.co/hk02CZVGoL (40 minutes ago)

@The_RiotACT @The_RiotACT
Chief Minister Andrew Barr has stepped into the row over Geocon's plans to build a 6-8 storey apartment building in old Kingston, saying the proposal goes too far and is not the right fit for the suburb https://t.co/kvWSsXddLL (1 hour ago)

@The_RiotACT @The_RiotACT
It's tax time again, and the ATO says it is making things easier this year, given it has been an unusual one for many people. Here are some things to keep in mind when doing your return https://t.co/KzJMzg2nIS (2 hours ago)