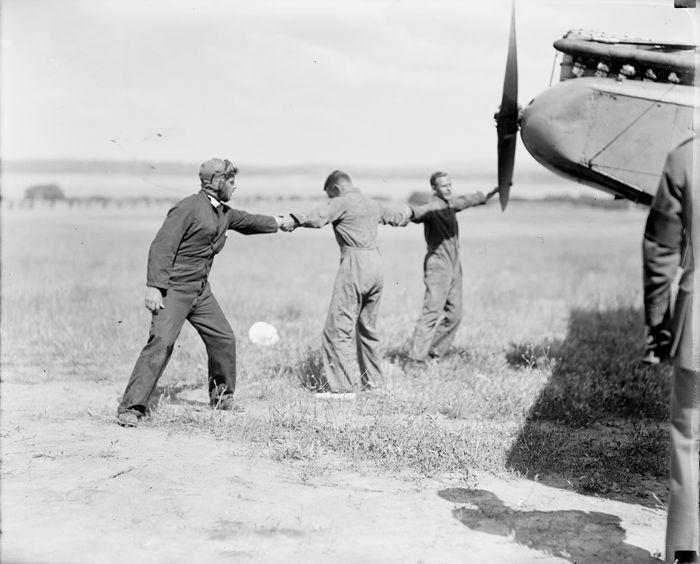 The remnants of Canberra’s first aerodrome in what is now Dickson, which played a key role in the development of the national capital, has been nominated for heritage listing by the National Trust ACT and No. 3 Squadron Royal Australian Air Force Association.

The story of the airfield, which operated between 1924 and 1926, is tinged with tragedy. On 11 February 1926 a plane went down, killing its two occupants and becoming Canberra’s first fatal air crash.

The Trust says the aerodrome stretched from Dickson Library to the western half of Dickson playing fields, and the library bears a plaque that “marks the site of Canberra’s first aerodrome”.

In 1923, Defence commandeered the site from Edward Shumack, taking over the southern section of the soldier settlement block that was granted to him when he returned to Canberra from the Western Front in 1919. 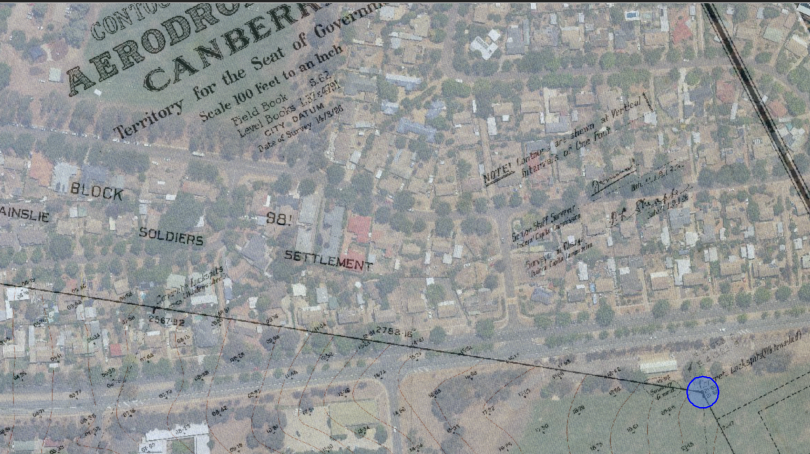 Where the aerodrome was sited. Image: Supplied.

The aerodrome was fenced and marked out, and at least 34 RAAF flights landed on the grassy field at Dickson to carry out aerial surveying and mapping for the Federal Capital Commission.

The Trust says that this was cutting-edge technology at the time and resulted in bringing Walter Burley Griffin’s dream to life.

When the aerodrome was operating – on what is now the community precinct that includes Dickson Pool next to Antill Street – aircraft were guided by an 18-metre, whitewashed concrete ring in the very centre of the landing ground, with whitewashed concrete markers at the four corners.

The joint heritage nomination is for the last tangible remnants of the aerodrome – the central ring marker and two of the lockspit boundary markers – which are believed to be buried beneath the surface. 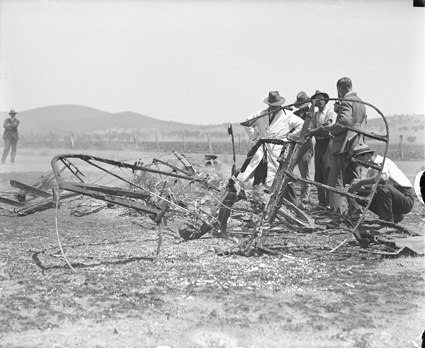 Trust president Gary Kent says it is hoped that the nomination can ensure there is adequate room around the markers to do further research and begin to tell the story of what was once there.

“While some people have heard about the first aerodrome, very few probably realise its pivotal role in the founding of the national capital,” Mr Kent said.

“After Walter Burley Griffin’s final blueprint was accepted, the Federal Capital Commission was determined to realise his dream. To do that, the commission used aerial surveys and photography – ground-breaking technology at the time.

“Sadly, one of the RAAF planes crashed there on 11 February 1926 on a mission to survey the Murrumbidgee.” 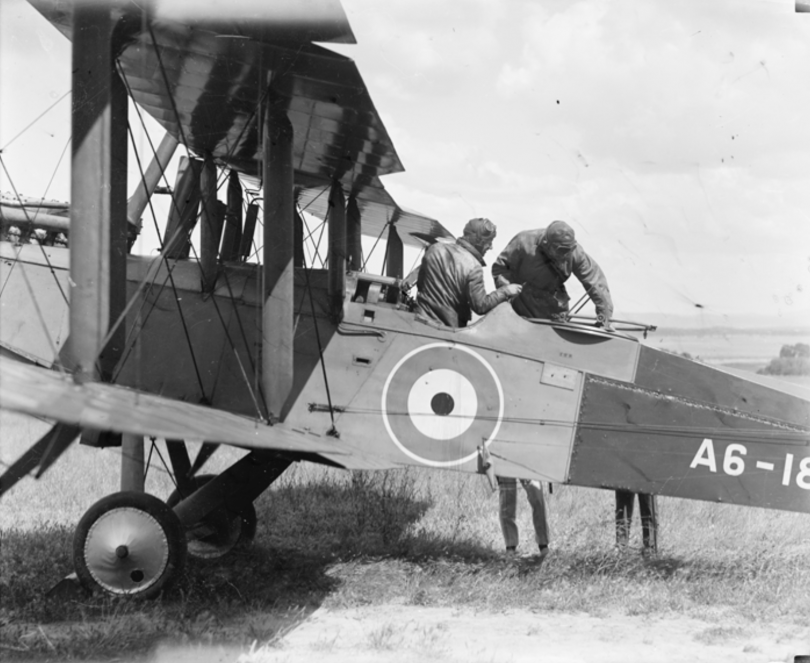 A RAAF De Havilland DH9 on the airfield in what is now Dickson. Photo: W J Mildenhall, National Archives of Australia.

Mr Kent says a bravery certificate and medal were awarded to Walter Johnson who was ploughing in the Shumacks’ field near the crash site.

”He rushed to the burning aircraft and managed to pull the observer out; however, that man later died of his injuries and is buried at St John’s in Reid,” he said. The pilot, a champion athlete who had trained at Duntroon, was killed on impact. He is buried at Queanbeyan’s Riverside cemetery.” 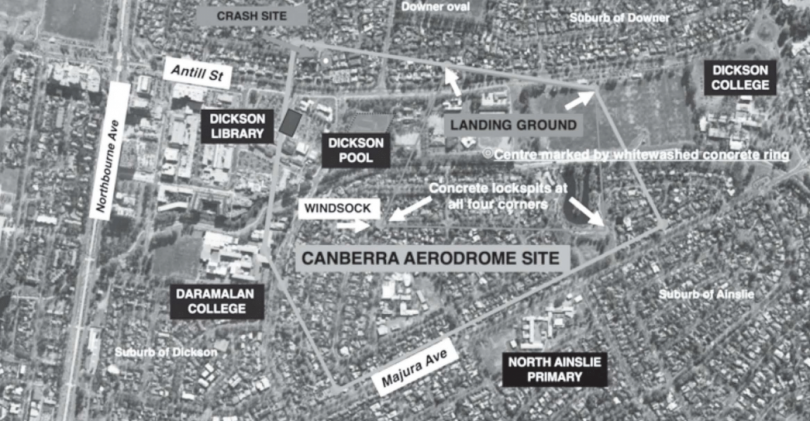 The map of the aerodrome in relation to modern amenities.

Mr Kent said that as soon as provisional registration is received, the Trust can seek help from an institution or university to map the locations more precisely, using ground-penetrating radar.

The aerodrome operated from the beginning of March 1924 to November 1926, when a second aerodrome was established in Majura Valley in time for the opening of the first Parliament House.

Great photographs and information. I was aware of this aerodrome – marked on some maps that I’ve seen. Which aerodrome was used in the opening ceremonies Provisional Parliament House in 1927? One of the planes during a fly-over went down at that time resulting in the death of the pilot who is buried in St John the Baptist Church Cemetery

The aerodrome is definitely an important piece of Canberra’s history. The Canberra & District Historical Society has an amazing photo frame made from the bomb sight of the plane that crashed in 1926. Big question is how did that piece of the wreckage survive? Did the wreckage get taken to RMC?

Kylie Jay - 51 minutes ago
Megan Chapman took me 40 minutes to get from Queanbeyan West to Tuggeranong on a week day which would normally take 15 on a w... View
consumeradvocatecanberra - 11 hours ago
Most folk don't get it. Canberrans love their cars and have done so for 30 years. It's quick and convenient. But, imagine car... View
Lucy Jane - 12 hours ago
4 day week for everyone but everyone gets a different day off. Will help immensely with traffic congestion and has been trial... View
Opinion 91

Catriona Moxham - 3 hours ago
Molonglo stage 3😢 View
Capital Retro - 8 hours ago
Living on borrowed time? It's actually more like living on borrowed money, from the Territory government to the unemployed. T... View
Lesa Schuster - 11 hours ago
The housing prices need to come down, it’s very hard for many people........it’s pretty city though and does not feel lik... View
Property 19

Kalo Arepo - 9 hours ago
Were they trying to jump the queue? View
Smackbang - 17 hours ago
How about you stop passing judgement on someone you know precisely nothing about? View
Community 15

Stephen Saunders - 17 hours ago
I've been on the Donor Register for many years, and I don't think my family objects, still in practical terms, I have little... View
Motoring 6