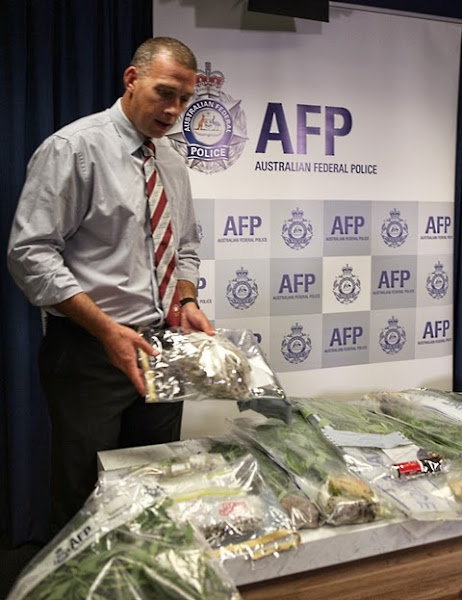 ACT Policing has seized 1.1 kilograms of cannabis, 10 cannabis plants, a home-made Taser, a machete and two cans of capsicum spray during a search warrant in Richardson yesterday (21 October).

About 9.10am, detectives from the Criminal Investigations Drugs and Organised Crime Team, with the assistance of local Tuggeranong patrol members, executed the Drugs of Dependence Act (DODA) warrant after receiving information from the public that the occupant was involved in drug dealing.

The street value of the seized cannabis is estimated to be $20,000.

The occupant of the premises, a 52-year-old woman, will be summonsed to appear in ACT Magistrates Court at a later date. She will be charged with multiple drug and weapons related offences.

Detective Sergeant Shane Scott said information from the public was critical in the success of this investigation.

“This incident demonstrates how important an anonymous phone call to Crime Stoppers can be. It’s particularly pleasing as we are in the middle of our illicit drugs campaign”, Detective Sergeant Scott said.

“The seizure of these weapons also shows drug dealing is not an isolated criminal issue. By targeting drug dealers, we’re also hoping to prevent the commission of other, more violent offences. These weapons in the wrong hands could have tragic results”.

ACT Policing is urging anyone who suspects drug dealing is occurring in their neighbourhood to contact Crime Stoppers on 1800 333 000 or www.act.crimestoppers.com.au

For more information on illicit drugs go to the ACT Policing website at www.police.act.gov.au.

If only she used Drones to deliver, then there would have been no phone call to crime stoppers, and no need for a home made taser…

Pammy Howarth - 5 minutes ago
Penny Hemsworth Absolutely. View
Milenko-Slavenka Jovanovic - 7 minutes ago
Camille Martin What is that to you, mind your own business. View
Rauny Worm - 39 minutes ago
maybe if he lived here, where billionaires don't pay tax anyway and there is no expectation of corporate giving( except to ce... View
Lifestyle 20

Grog Yogurt - 56 minutes ago
Paul South so did I, worked there for 5 years. Late 1990 from memory on a Tuesday evening (tight arse Tuesday at the movies)... View
Community 105

Linda Stapleton - 1 hour ago
Leading up to Summernats it got noisy around here. The hoons started with their fun and games as they saw it and the police t... View
Dee Tee - 3 hours ago
Plenty of notice to book a holiday in advance to get away View
Beck Bonazza - 4 hours ago
Micheal Anderson Spot on! View
News 3

Capital Retro - 2 hours ago
And this is a natural occurrence, about every 50 years. Next Canberra bushfire disaster due about 2050. View
phydeaux - 3 hours ago
Except that the ember attack critically affecting Duffy, where most houses were lost, was from the then adjacent pine forest,... View
Alex Kay - 3 hours ago
Fay Dickie move then, that huge tree was probably there well before you View
Opinion 139

Capital Retro - 10 hours ago
A lot of crime in my neighbourhood has certainly been reported, some serious home invasions included but the police media hav... View
show more show less
*Results are based on activity within last 7 days

@the_riotact @The_RiotACT
#DixonAdvisory - for decades the first choice for financial advice in #Canberra - has entered voluntary administration due to mounting liabilities, potential class actions and penalties owing to the corporate watchdog https://t.co/3IHElcJyLS (20 minutes ago)