This shocking CCTV footage from 2018 shows a bikie shooting and arson attack at a Calwell home. Photo: File.

The bikie gang threat in the ACT is exaggerated, according to a new report released yesterday by Attorney-General Gordon Ramsay which found only 1 per cent of crime in the Territory was committed by gang members.

The independent review of the effectiveness of ACT Policing crime scene powers and powers to target, disrupt, investigate and prosecute criminal gang members in the Legislative Assembly, written by Professor Terry Goldsworthy from Bond University, also found that anti-association and consorting laws, trumpeted by the Canberra Liberals as an answer to bikie gang violence in the ACT, were ineffective.

He says there is little evidence they reduce overall offending, and that such laws were not necessarily focused on serious or organised crime.

“The resources used to police such laws would be better invested in targeting actual criminal activities rather than in generalised claims of disruption through stopping associations between individuals in which there is no requirement for a criminal purpose to be attached,” Professor Goldworthy said.

He warned against implementing a consorting-type offence similar to the New South Wales model, which the Opposition has been calling on the government to adopt.

On the perceived threat posed by bikie gangs, Professor Goldsworthy said perceptions do not always correspond to reality.

He found that the 1 per cent figure held true for offences related to drug and organised crime, and that 19 years of policing data has shown no murder charges against current Outlaw Motorcycle Gang (OMCG) members in the ACT.

“Many of the crimes committed by current OMCG members are minor and not of a serious or organised crime nature,” he said. ”Not all OMCG members possess criminal histories, and research informs us that many OMCG criminal activities are not undertaken within, or on behalf of, the gang.”

The report noted that the number of OMCG members in the ACT has not increased in the last five years, according to the available data. 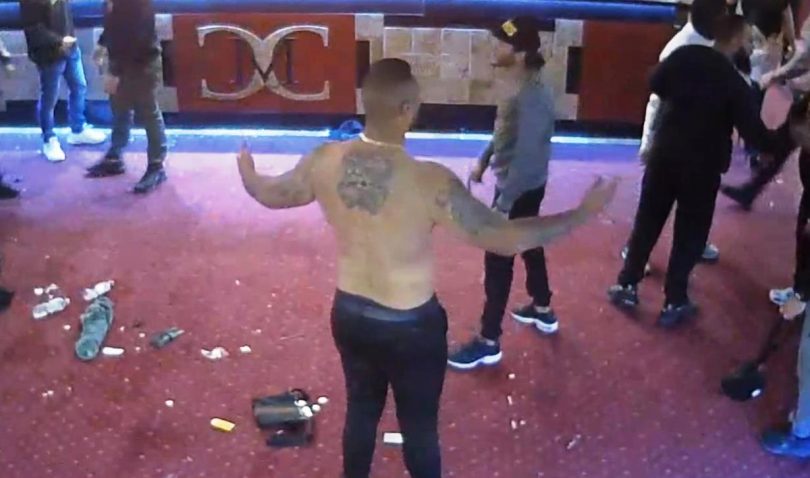 A still from CCTV footage of an infamous bikie brawl at a Fyshwick strip club in 2018.

Professor Goldsworthy said the steps taken by the government to combat serious and organised crime were effective and proportionate.

While he dismisses anti-consorting laws, Professor Goldsworthy backs the use of non-association and place restriction orders (NAPROs) due to their ability to target individuals who are proven to have engaged in serious or organised crime activity.

Calling them a formidable tool, he said NAPROs allow for a more targeted response, with a focus on specific serious crime, rather than a generalised approach, as is the case with current Australian consorting laws.

Mr Ramsay said the report endorsed the government’s approach, including its confiscation of assets bill which he introduced to the Assembly when tabling the Goldsworthy report.

He said the report identified the bill, which targets unexplained wealth, as a key area of reform as an additional measure to enhance law enforcement powers in the ACT.

Professor Goldsworthy makes a number of recommendations including that an independent review be conducted to establish why there are so many failed prosecutions against OMCG members, a situation he said was concerning.

He also called for much greater maximum penalties for offences involving participation in criminal groups, or that a new sentencing regime be created for offences that are typically committed for, and on behalf of, criminal gangs.

Shadow Attorney-General Jeremy Hanson said the Canberra Liberals remained committed to anti-consorting laws that had been backed by police and other experts on the front line of law enforcement.

“The fact is that since the ACT Government failed to introduce anti-consorting laws a decade ago, we have seen a four-fold increase in bikie gangs and, as a result, a bikie war unfold in our suburbs,” he said.

“Meanwhile, the states like SA that have introduced anti-consorting laws have recently seen the last bikie club house in their state close.

“We will listen to police, put the safety of our community first, and put a stop to the shootings, fire bombings and violence that has grown under ACT Labor.”

I don’t know whether the gang laws will work or not. But to claim this work ‘as an Independent report’ is far fetched. The author of the report Terry Goldsworthy has long written University papers and press opinion pieces which are stridently against Anti Consortium laws. He has done this over many years. One from February 2016 titled: War on bikies: Australia’s love affair with consorting laws by Terry Goldsworthy. Another acedemic paper from 2017 claiming a lack of effectiveness in anti-association legislative responses. The ACT Government shouldn’t go out for ‘Independent advice’ from an acedemic whose views are already strongly formed and widely well known. It’s like getting Ronald McDonald to investigate who sells the best hamburgers. We Canberran’s deserve truly independent advice to Government, seeking advice when you already know the answer you want, isn’t good for our city long term. I’m sure all sides of the debate would agree with this.

Police know where they congregate,use existing laws set up breathelisers nearby do licence checks make life difficult.Worked for the mayor of new york

“Many of the crimes committed by current OMCG members are minor and not of a serious or organised crime nature,”

See direct quote form AFP in 2018 – who do you believe the people on the front line or an academic cosied up behind a computer.

28 August 2018 ANTI-CONSORTING STANCE SEES THE ACT BECOME A NATIONAL LAUGHING STOCK…. AGAIN MEDIA STATEMENT Today’s article in the Daily Telegraph has again highlighted that the ACT Government’s stance on outlaw motorcycle gang laws is making the nation’s capital a laughing stock for bikies across the country, according to the Australian Federal Police Association (AFPA). The AFPA President, Angela Smith said today’s story is a reminder that the ACT Government is making the ACT an easy place for bikies to do business and action needs to be taken to stop this activity immediately. “The ACT stance on anti-consorting is a green light for motorcycle gangs to roam and operate freely in Canberra. “We know that there has been an influx of bikies into the ACT since the tough anti-consorting laws have come into place in Queensland, New South Wales, Victoria and South Australia.And it has been confirmed by ACT Policing that the ACT has four outlaw motorcycle gangs operating in Canberra:the Finks, Rebels, Comancheros and Nomads.“ACT police are well-equipped to take on Canberra’s outlaw motorcycle gangs,but the government must get serious and give police the laws they need to tackle this bikie menace.

PS here’s an idea lets trial it for 5 years and make the Tuggeranong valley ‘anti consorting’ and the North side not and see if there is any change after that period.

I remember the days 30 years ago when only the Rebels were in Canberra – their “place of business” was in a street in residential Fisher. It was respectable and there were no “inter club rivalries”.

Ooohhh – I grew up in Fisher. Which street was bikie HQ?

If anti-consorting laws don’t work why are there so many bikie gangs in Canberra now?

Wow! Someone must be covering up a heap of “drive by shootings” in Canberra if Bikies are only responsible for 1% of those.

Or is it perhaps probable that the extremely serious crime of people driving around shooting at houses and cars is actually mainly being perpetrated by bikies despite the gist of Mr Goldsworthy’s report.?

So which is it?

I suppose once again this is an example of the old adage of there being lies, damned lies and statistics.

So there is no need for Task Force Nemesis anymore is there and we can look forward to members of Canberra’s OMCGs manning the Labor Party’s voting booths come this year’s election?

They may only commit a low percentage of crime but the type of crime is far more serious, shootings, drug dealing and public brawling etc. I have had two shootings in my suburb alone and another in the suburb next to mine in the last few years. Why are these crimes being down played? I have to say I am losing confidence in this government to be able address this problem and it would appear that it does not have the courage to do what is needed. The fact that Canberra has become the ‘go to place’ for the OMCG’s due to the lack of any ‘anti consorting’ laws, it is little wonder we continue to have this problem. Canberra needs to align with the other states to make it less attractive to these criminals. The announcement back in 30/05/2019 to recruit a further 69 police officers would also suggest that the police force has been running under staffed for a number of years. This has probably further exasperated the police efforts to combat this.

Professor Terry Goldsworthy is a known leftie civil libertarian in Queensland. He opposes anything that remotely suggests giving police any real powers. He may be a former QLD Pol member however his allegiances are squarely with the Bond University academics

Good to have some reasoned evidence

What is missing in opening is “Reported” crime.

This has been said a million times, and you’re never going to convince the people who are sure *this time* it will work. Some people just can’t accept facts.

Well, they do refer to themselves as 1%’s. It makes sense.

I’d like to know why people think anti consorting laws would work. Basically the rules came about in other states that had bikie problems. The laws make it look like the politicians did something about bikie related crime, but all they’ve done is removed the visibility of bikies in public. They are still consorting in private and still committing crimes. We just don’t hear or see much about it.

And the drugs they supply would also contribute to other crimes by users.

Veronika Sain I was going to say it’s the types of crimes associated with them.

So a pretend “professor” from a pretend university is the source that it won’t work?