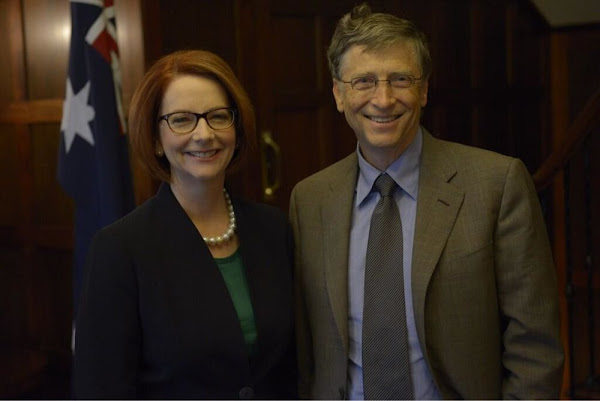 Prime Minister Gillard is coming over all fangirl at Bill Gates being here in Canberra.

The PM meets with @billgates at The Lodge. TeamJG twitter.com/JuliaGillard/s…

Barcham has invited the Great Geek to Nerd Trivia at the Phoenix tonight. We’ll let you know how that goes:

@billgates Hey Bill, I’m running a Geeky Themed Trivia event at the Phoenix Bar in Canberra tonight at 7.30, would love if you could attend!

Not an iPod in sight at Parliament House while Gates is there?

TeamJG is to show it’s not the actual PM doing the tweeting. Just the staffer who drew the short straw.

Ah ok that makes more sense then. When I saw it all I could think of 13 year olds and thier “Team Edward!” “Team Jacob!” Twilight crap I had to endure.

Like this one from last night, she must be a real cricket nut 🙂

Julia Gillard ?
Congrats to @sachin_rt, stepping away from @IPL on the night of a great victory for the @Mipaltan & well done to Mitch Johnson too! JG

You know what, I think Julia was probably mid-way through writing her victory speech until she saw your post. You’re right, Bill Gates is the only thing that will stop Gillard’s hitherto unstoppable march to election success.

Just as it was all Bob Geldolf’s fault that Howard lost his job to an ex-ABC journo.

Is the PM going to break down and cry when she recalls seeing her first computer?

TeamJG is to show it’s not the actual PM doing the tweeting. Just the staffer who drew the short straw.

Gates seems to have that effect on people – I remember footage of the often gruff, and sometimes terrifying, Kerry Packer going all gushy when seated next to Gates.

Demi Naylor - 7 hours ago
Well.. you know.. f they can afford a house or find one suitable to rent.. View
Julie Macklin - 7 hours ago
Marc Edwards That can made it worse for public transport. It's okay for those living nearby, but for people in other parts of... View
Kate Bee - 8 hours ago
Elizabeth Ann Thurbon I've been here 48 years and the crime rate is one of two significant excellorated changes in recent yea... View
Food & Wine 9

Brad Kelly - 9 hours ago
Seriously if they all go the Canberra raiders have depth... yes they will not win a GF and that’s ok 😮 it’s a game ...... View
Maree Hillery - 11 hours ago
Richard Willcoxson pretty soft. Where's their loyalty. View
News 11

Marc Edwards - 10 hours ago
Maybe the Berra Party View
Paul Leins - 10 hours ago
Sure, just bet a former liberal will be a real check to his mates in the liberal party 🙄 View
Michael Ilsley - 10 hours ago
Glad to see him engaged in the community after the tragic loss of his son. View
Community 52

Ian Lindgren - 12 hours ago
These comments by the The ACT Minister for Industrial Relations and Workplace Safety Mick Gentleman mean that it’s time all... View
Kevin Hodder - 14 hours ago
How about a crack down on government agencies waisting tax payer funds, View
Property 35

rossau - 13 hours ago
Commandeering all land and rental property is no avenue to request the government to financially support the practice. Get ou... View
rossau - 13 hours ago
Julie Macklin, that's a great idea. The point is though, an owner has the option on upgrading on the gounds of comfort, cost... View
Opinion 69

chewy14 - 14 hours ago
JC, What evidence do you have to show that the Kingston line would stack up? The government's own analysis shows that the sec... View
show more show less
*Results are based on activity within last 7 days

A huge family home in Florey has sold at auction for $1.6 million, setting a record for the Belconnen suburb....
Opinion 71

It's no secret that I'm a huge fan of this city. Canberra has been my home for the better part...
Community 52

It's no secret that I'm a huge fan of this city. Canberra has been my home for the better part...
Best of Canberra 169

@The_RiotACT @The_RiotACT
Free and Live is a collaboration between @TheCIMF and Belco Arts that will bring a whole day of free musical performances to life on Saturday ... and you're invited! https://t.co/H04S7nwGXW (10 hours ago)

@The_RiotACT @The_RiotACT
#Canberra is really pulling out all the stops for the #MothersDay weekend with plenty going on - from markets to high tea and everything in between https://t.co/Yx77PrbgYS (11 hours ago)

@The_RiotACT @The_RiotACT
Are you in line for the NBN? The next suburbs to get fast internet have been announced, but Canberra businesses are looking to next Tuesday's budget for a long-awaited strategy to boost the digital economy https://t.co/M04jWpY6LH (13 hours ago)