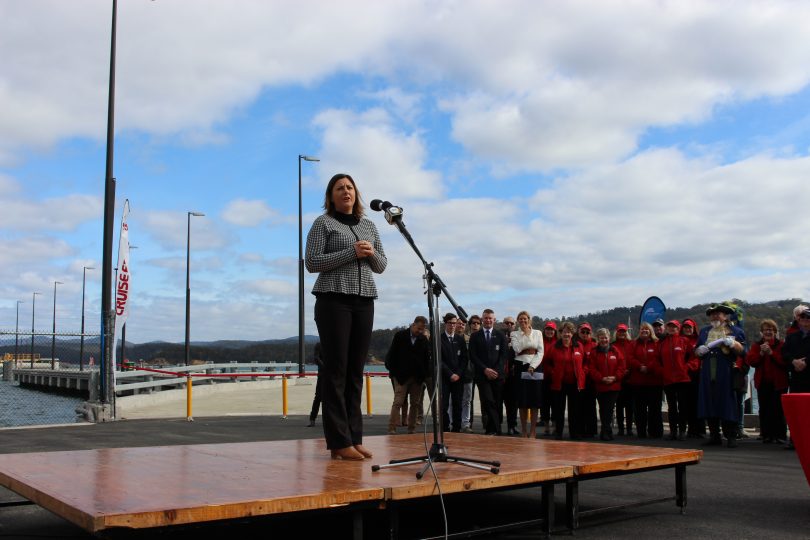 Labor candidate for Eden-Monaro Kristy McBain has been targeted by emails purporting to be from the Catholic Church. Photo: Ian Campbell.

A bizarre series of emails with purported links to the Catholic Church claiming that God has forsaken Eden-Monaro have been denounced by candidates from all major parties and by the Australian Catholic Bishops Conference.

In an attack that appears to mirror the campaign against independent Wentworth candidate Dr Kerryn Phelps last year, the emails allege that Labor candidate Kristy McBain trained witnesses “to wrongly accuse priests to get pay-offs”.

One email attacked both former Bega Mayor, Ms McBain, and former Eden-Monaro MP Dr Mike Kelly, for their “witch hunt against our Catholic Church” and urged voters to vote for Liberal candidate Fiona Kotvojs to restore order to the region.

The emails have been sent to seemingly random recipients and claim to be from Catholic parishes, dioceses and other organisations. The authors appear to have created fake email addresses using legitimate or seemingly legitimate domain names, although the Church says there is no evidence that their internal databases or servers have been compromised.

Ms McBain, Ms Kotvojs and the Australian Catholic Bishops Conference (ACBC) have all denounced the emails, calling them wrong, offensive, inappropriate and malicious.

“The claims in these emails are wrong, false and offensive,” Ms McBain told the ABC. A statement from the ALP’s National Secretary Paul Erikson said the emails were “particularly offensive to the communities of Eden-Monaro that have lost so much during the Black Summer bushfires”.

“I fully condemn this email. It is offensive and inappropriate. There is no place for this sort of thing in our politics or in our society,” Dr Kotvojs said.

The Australian Catholic Bishops Conference called the emails “criminal” in nature while conceding that since they don’t seek money or personal details, they may not meet the threshold for a police investigation.

“The content in the small number of emails that have been forwarded to us is offensive, unChristian and, in some cases, defamatory,” Fr Stephen Hackett, general secretary of the ACBC, said in a statement to the ABC.

“The views expressed in the emails we have seen do not in any way reflect the views of the Catholic Church, nor the organisations that are purported to have sent them.”

The emails allege that George Pell’s accusor, Witness J, is Kristy McBain’s half-brother and has died, and that God is punishing the electorate with bushfires, and Dr Kelly, as recompense for denying Pell’s innocence.

There is no evidence to suggest Witness J has died and Dr Kelly sustained his injuries while serving in the Middle-East with the Australian Defence Force before entering Federal Parliament in 2007.

The emails have been referred to the Australian Electoral Commission (AEC), but the Commission says it cannot do anything about them.

Parallels are being drawn to the homophobic emails which were during the 2019 Federal election attacking independent candidate Dr Kerryn Phelps running in the seat of Wentworth.

Some emails urged voters to support her Liberal opponent Dave Sharma, who strongly denounced the emails at the time. 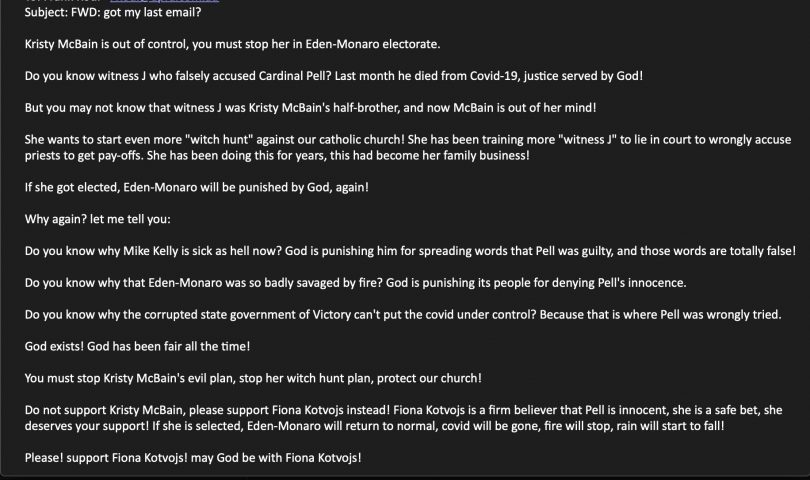 One of the emails purporting to be linked to the Catholic Church. Photo: Hamish McDonald Twitter.