Blowing up the interwebs as easy as un, deux, trois!

Well I fell for it, hook, line and sinker! Take a pretty girl, add a beautiful exotic accent (well, I thought it sounded sexy), a sob story and voila … you have instant marketing campaign reaching millions of people on the internet and mainstream media.

They call it guerrilla marketing. An advertisement strategy concept designed for small businesses to promote their products or services in an unconventional and inexpensive way. This involves high energy and imagination focusing on grasping the attention of the public in more personal and memorable level. 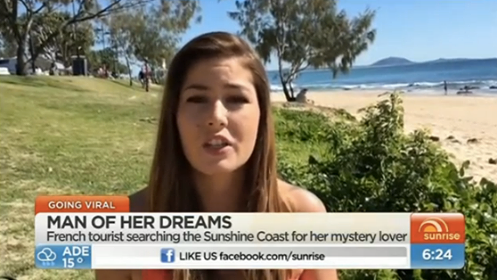 The concept … use a local girl, one who might seem believable as a love-sick French tourist, who has flown back to Australia to find the man of her dreams. Name her Natalie Amyot and have her post a clip online claiming to have met the one while visiting the Sunshine Coast.

Now add the drama. Something that might be somewhat controversial. ‘Sacre bleu’! … let’s have her knocked up by some tall, blonde tanned surfer dude who she dreamily portrays as the ‘man of her dreams’. This all happened after a steamy but ‘beautiful’ one night stand on her last night in one of the country’s tourist hot spots!

However, Natalie must be careful to only reveal her pregnancy after returning to Paris – but to her horror has lost her phone and his number! And there we have it, you can almost predict the crawl through on the television:

“We want to help this tourist find the man of her dreams! If you have any details, let us know!”

The trick is … leave just enough holes in the story so that a number of things can happen. Firstly, there must be room for the moral righteous to scream about not using contraception.

Secondly, it must appeal to the mostly feminine romantic tragics who just can’t wait to share this on Facebook to help this gorgeous girl reunite with her soul mate. And finally, and perhaps most importantly, let the hook dangle for no more than 24 hours or so. Timing is everything in this game – and you can’t wait too long for the reveal.

And here it is, yet another video, this time with the lost romantic proclaiming “I’ve found him” – before steeping off camera for some marketing bloke in a crisp white shirt with a sly grin letting us all in on the prank – that it was all a bit of a plug for a Sunshine Coast resort town.

As the French would say …  fin de l’histoire.

4 Responses to Blowing up the interwebs as easy as un, deux, trois!
Filter
Showing only Website comments

I kind of saw the story and thought, more rubbish on TV and moved on. I also thought if she slept with a guy, didn’t use protection and fell pregnant and didn’t remember his name, well that is her “bad” choice.

You didn’t really believe this was real did you?

Firstly, she couldn’t even remember the guys name.

Secondly and more importantly, no one has ever had a good night in Mooloolaba.

Ummm … Yes I did actually, Mind you I was busy working at the time so didn’t really have time to digest it all 🙂 Maybe I’m just a romantic at heart – or simply a sucker for a madamosielle in distress?

You didn’t really believe this was real did you?

Firstly, she couldn’t even remember the guys name.

Secondly and more importantly, no one has ever had a good night in Mooloolaba.

Carly Farrell Wood - 6 hours ago
Vic Wowk this is what I was trying to find about the 2003 bushfires View
Kirsty Luckie - 7 hours ago
Jenelle Balch too true. View
Peter Mcleod - 7 hours ago
Don't blame Andrew cos he will run for cover like Jon S. View
Community 2

Marion Baney - 8 hours ago
Helaine Freeman we need to take mum and dad out too see these. Lol... View
Stephanie Dodds - 10 hours ago
Brodie Gibson - has Hannah seen these yet? View
News 125