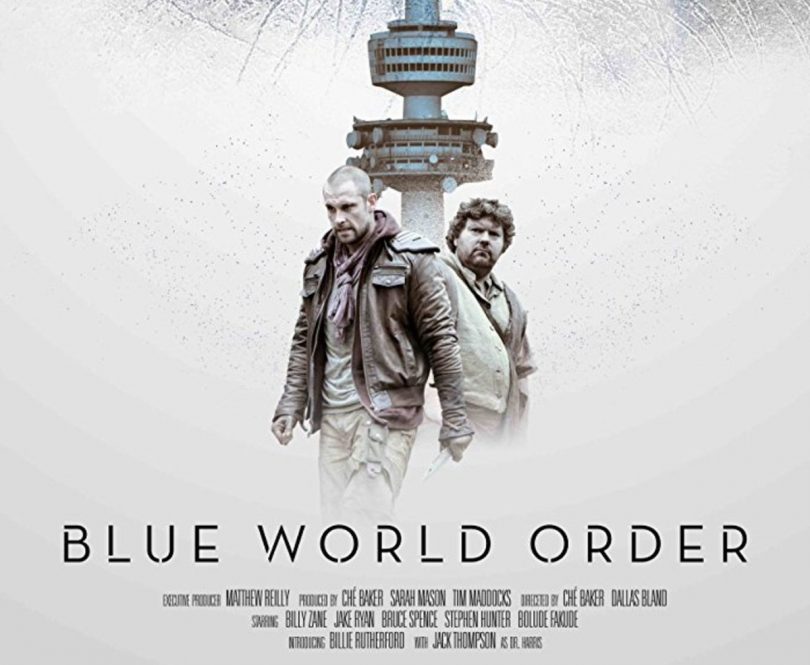 From Thursday, for the first time ever, an entirely Canberra-produced film will enjoy its own theatrical run at Dendy Canberra.

Canberra’s very own blockbuster, the full-length Blue World Order, will begin its exclusive season this Thursday, 3 May. To mark this momentous occasion, to celebrate the development of the industry and to commend this giant leap forward for local cinema, the Opening Night Screening at 6:30 pm will be followed by very special Q&A with director Che Baker.

It’s no secret that our national film industry suffers all too regularly from the ‘Australian cringe’. Put simply – not enough Australian audiences make the effort to go out and see Australian films, despite the fact that we actually produce consistently interesting and individual cinema.

In this genre mash-up of Mad Max, Star Wars, Children of Men and 1984, we follow Jake – played by Jake Ryan (Home and Away) – as he struggles to save his daughter in a crumbling society of the future which is condemned to violence and is teetering at the edge of survival. Born of an 8-minute short film produced back in 2012, this independent post-apocalyptic drama stars US actor Billy Zane of The Phantom (1996) and Titanic (1997) fame, along with Australian icon Jack Thompson (Breaker Morant). ACT Chief Minister Andrew Barr even gets a cameo in this entirely locally-produced sci-fi love letter to Canberra.

It’s not just faces but also places which are recognisable here. Even if the sci-fi overtones of the film aren’t necessarily your preferred poison, there are not many other films which showcase Canberra’s (and the surrounding area’s) landscapes and landmarks, not to mention the iconic Black Mountain Tower framed within a destitute and barren wasteland.

Australian productions often only receive one-off screenings or limited seasons – or worse, nothing at all – but, with the right amount of support and interest, this film could just help to change that status quo. Canberrans love to support local. So, in that very spirit, head along and check out Blue World Order – Canberra’s newest claim to fame (locals know we truly possess plenty)!

Film-makers and co-directors Ché Baker and Dallas Bland are looking to even bigger and better things off the back of this homegrown production in the heart of the local region. Blue World Order is just the beginning. Get on board!

Head HERE for more information on the film, the opening night screening, and other session times.

The office is planning to see it on Thursday!!!

How long is it on for lex ?

We saw the film at Dendy Thursday. Che and his team have obviously done some good work in the post production field. Looks and sounds good on the Big Screen. Enjoyed the ride.
PS is there a ‘making of’ book coming out ?

The ad looks great. I saw it in Dendy the other day!

Peter Curtis - 9 hours ago
I cannot agree more. View
Nick Swain - 9 hours ago
And so do the equally old Kingston shops. Both shopping centres have long standing nominations to be included on the ACT Heri... View
bj_ACT - 16 hours ago
Why is Morris always calling on the ACT Government to pour funds into areas where he is making millions and millions of dolla... View
News 70