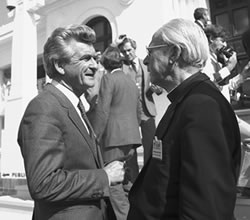 One of Australia’s towering post-war political figures, former PM Bob Hawke has died. Hawke dominated Canberra for much of the 1980’s following the “drover’s dog” election. He was prime minister from 1983 to 1991 and prior to that, president of the ACTU.

Canberra laid the seeds for his prime ministership: he’d made the first challenge to Bill Hayden’s leadership at the Labor Party’s federal conference at the old Lakeside Hotel in July 1982, before his eventual victory in 1983. With his then-wife Hazel and family, he lived at The Lodge for the duration of his prime ministership, the longest of any Labor leader.

And it was Hawke who, in the words of ACT chief minister Andrew Barr, “recognised the significant democratic deficit from Federal rule in the ACT and granted us self-government”. Himself deeply moved, Mr Barr said that “Tears will be shed across the nation for Bob Hawke. I am crying as I write this statement. Bob will be forever remembered as one of our nation’s greatest leaders.

“Together with Paul Keating, he built modern Australia. Hawke and Keating reshaped the Australian economy and set our country up for nearly three decades of continuous economic growth,” he said.

“His enduring legacy is Medicare and our world-leading public health system.’

“We have lost a great Australian. Labor has lost a hero. We will always honour him and continue to fight for his legacy,” Mr Barr said.

In recent days Mr Hawke had strongly endorsed Labor leader Bill Shorten as prime minister. A statement from his wife, Blanche d’Alpuget said “Today we lost Bob Hawke, a great Australian – many would say the greatest Australian of the post-war era. He died peacefully at home at the age of 89 years.

“Bob Hawke and Paul Keating and their governments modernised the Australian economy, paving the way for an unprecedented period of recession-free economic growth and job creation.

Ms D’Alpuget paid tribute to Hawke’s “consensus-style approach of bringing together the trade union movement and the business community boosted job opportunities while increasing the social wage through Medicare and extra financial support for low-income families”.

She said that with his “highly talented Cabinets”, he foresaw the Asian Century and positioned Australia to take full advantage of it “through a program of sweeping economic reforms”.

Ms d’Alpuget said that among Hawke’s proudest achievements were large increases in the proportion of children finishing high school, his role in ending apartheid in South Africa, and his successful international campaign to protect Antarctica from mining.

“He abhorred racism and bigotry. His father, the Reverend Clem Hawke, told Bob that if you believed in the Fatherhood of God then you must also believe in the Brotherhood of Man. Bob would add today the Sisterhood of Women.

“Bob was dearly loved by his family, and so many friends and colleagues. We will miss him. The golden bowl is broken,” the statement concluded. 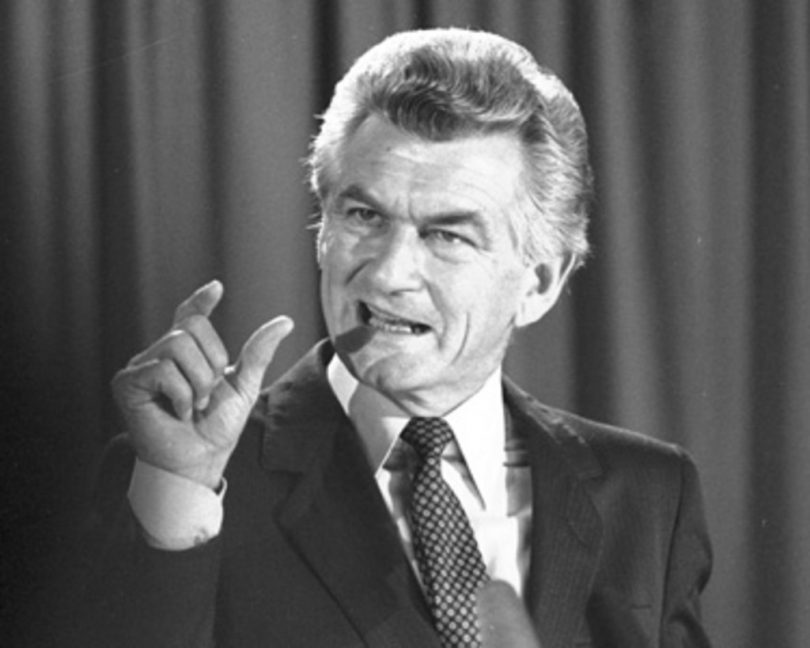 Speaking from Sydney, Labor leader Bill Shorten said “tonight the nation and Labor are in mourning. We have lost a favourite son. Bob Hawke loved Australia and Australia loved Bob Hawke. His legacy will endure forever. Bob Hawke changed Australia for the better. He brought people together…he modernised our economy, he transformed our society, he protected our environment…”

Mr Shorten had last seen Mr Hawke a week ago “with a crossword and a cup of tea”, and they spoke about the ALP and the election. “We all loved Bob Hawke, we will miss him a great deal,” Mr Shorten said.

A later statement said Mr Hawke had created “a modern, outward-looking, competitive economy, built around the principle that working and middle-class people must be fairly rewarded for their efforts…

“A system dedicated to the idea that growth is stronger when it is shared, when wages and living standards rise and a generous safety net catches those who fall on hard times.”

Mr Shorten added that “Every Australian carries a monument to Bob Hawke with them, their Medicare card. A green-and-gold promise that the health of any one of us, matters to all of us…..

“He was a leader of conviction – and a builder of consensus. But for Bob, consensus and co-operation never meant pursuing the lowest common denominator.”

Prime Minister Scott Morrison paid tribute to Mr Hawke as “a great Australian” saying he would be “the bloke” that all Australians would remember for his capacity to connect with the lives of ordinary Australians. “We rejoice in the life of Bob Hawke,” Mr Morrison said, referring to “passion, courage, and an intellectual horsepower that made our country stronger”.

UnionsACT will hold a memorial to remember Bob Hawke on Friday (17 May) from 5 pm at the UnionsACT office at 11 London Circuit in Civic, and said all were welcome.

UnionsACT secretary Alex White said: “The entire Canberra union movement mourns the passing of Bob Hawke yesterday. Bob was a great Australian leader and prime minister, and as ACTU president he was a hero to working people.

“We want to welcome Canberrans to pay their respects to Bob and his family, and join the entire union family in grieving. He will never be forgotten.”

Canberrans can also leave a personal message of condolence on its online message book: https://www.unionsact.org.au/vale-bob-hawke

Danielle Crombie - 2 hours ago
Melissa you missed Matt in Jugiong last visit 😒 View
Fred Lamb - 2 hours ago
Who cares? He is supporting the Australian film industry. View
Alwyn Edwards - 6 hours ago
Had a beer with Richard Clapton 25 years ago on the Gold coast View
Opinion 6

consumeradvocatecanberra - 2 hours ago
Good on you Mark for stating the bleedingly obvious. What I would like to see is evidence based figures from Housing, prefera... View
Trish Casey - 3 hours ago
Elderly people and those with disabilities are put in ACT Government house and then for gotten or bullied by maintenance View
ChrisinTurner - 5 hours ago
If the ACT government continues to demolish more public housing dwellings than it creates, the problem cannot be solved. Publ... View
News 2

Jenny Graves - 3 hours ago
I do hope that we aren't going to lose all of our deciduous trees, to be replaced by eucalypts. That would change the whole l... View
ChrisinTurner - 5 hours ago
Can anyone explain why the Tree Protection Act does not apply to street trees? Developers appear to be free to remove any str... View
Lifestyle 9

Surojit Samanta - 5 hours ago
Piyush Subhajit photography? View
Shane McMinn - 19 hours ago
Ché Baker will this get a DVD release at some stage?? View
Property 8

Julie Macklin - 15 hours ago
Linda Stapleton I rode to work in the rain. I had wet weather gear to wear. Well, I did until into my 50s. Then I began to ta... View
Stephen Harris - 19 hours ago
Julian Hayes thenif it increases their costs but not their profits then they will stop doing what they are doing and do it di... View
Food & Wine 3

@The_RiotACT @The_RiotACT
Access Recycling is reassessing its future in Fyshwick and may move to Goulburn in the wake of legislation blocking its proposal https://t.co/e59RVT1RYZ (12 minutes ago)