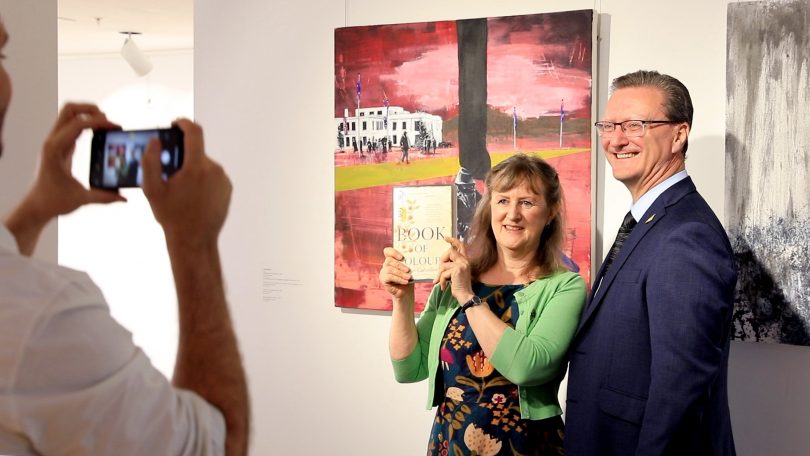 Robyn Cadwallader receives acclaim from Minister for the Arts Gordon Ramsay at the ACT Book of the Year awards. Photo: Michelle Kroll.

When Robyn Cadwallader creates her meticulously detailed medieval worlds, she doesn’t look out the window at the Murrumbateman landscape. Instead, the internationally acclaimed author looks at a bare wall.

This week, Cadwallader collected the ACT Book of the Year award for her novel, Book of Colours. Her first book, The Anchoress was internationally reviewed and this one takes place in the same world, although it’s a considerably bigger one.

This week’s news update comes from the ACT Book of the Year awards, where Murrumbateman author Robyn Cadwallader picked up the major prize for Book of Colours. Also making news this week, the Orroral Valley Fire, indigenous cool burning and coronavirus.

Posted by The RiotACT on Thursday, February 6, 2020

While The Anchoress focusses on the life of a young woman literally walled into a cell next to a church as a religious devotee, Book of Colours dives into medieval London, a restless, uneasy time that would produce the Peasant’s Revolt 50 years later.

“I was pretty keen to move out of the claustrophobia of the anchoress’s cell,” Ms Cadwallader told Region Media at the awards ceremony.

“I wondered if I could write about big cities, and lots of people and I found that I loved creating scenes with lots of interaction between people. It was like breaking out!”

“I was very conscious that I knew little about manuscripts in any detail,” Ms Cadwallader says. “I didn’t know how they were painted, the theory behind the illustrations, why they drew in the margins.” There were five shortlisted entries for ACT Book of the Year and two highly commended entries. Photo: Michelle Kroll.

The story took on its own life as Cadwallader began to write.

“I’d been to the British Library to do research and had been reading an academic book about the manuscripts that pointed out how different each illustrator was.

“The library had that exact 13th-century manuscript, so I went down to the manuscript room and opened it very, very carefully. By the time I came out of there, I had four characters roughly outlined.

“I had the master limner, the one in charge, and his wife who worked with him, the new man who is talented but mysterious and a bit of a worry, and the apprentice.

“The story is never as simple as it sounds, but if I am committed then the story starts to take its shape.”

There is a complicated timeline with two plots converging, necessitating a lot of meticulous checking and proofreading from Harper Collins, and Cadwallader says that was critically important in creating a coherent world in which everything aligns, a matter of some importance to her as a medieval scholar.

And that mindset is where the blank wall comes in, turned away from the Murrumbateman scenery.

“My study has one big glass window looking onto the garden, so it’s nothing like mediaeval London! But my desk faces a plain white wall. Before I start I need to do enough research that I can see a place and be in it. It was the same with The Anchoress. I knew every stone in that cell, every step. When I sit at my desk I can go back into that world.”

The awards field was a substantial one this year: there were 46 entries from Canberra and the surrounding community, and five of these were shortlisted. Made by Humans: The AI Condition by Ellen Broad was highly commended, as was Wild Sea: A History of the Southern Ocean by Joy McCann. One by Andrew Hutchinson, Mirror Me by Rachel Sanderson and Things I’ve Thought to Tell You Since I Saw You Last by Penelope Layland were all shortlisted.

The $10,000 prize was awarded by Arts Minister Gordon Ramsay who congratulated the shortlisted authors and thanked the judging panel of Tracy Hawkins, Cameron Muir and Melinda Smith.

“Our arts are such an important area. They capture our identity and reflect our soul,” Minister Ramsay said.

“The breadth and depth of the arts across the ACT is one of our strongpoints as a community.

“I encourage people to seek out these novels in bookstores. And Libraries ACT, which has also been a great supporter of the award, will also have copies available for loan.”

Nominations for the 2020 ACT book of the Year are now open and will close on March 31, for books published in 2019.