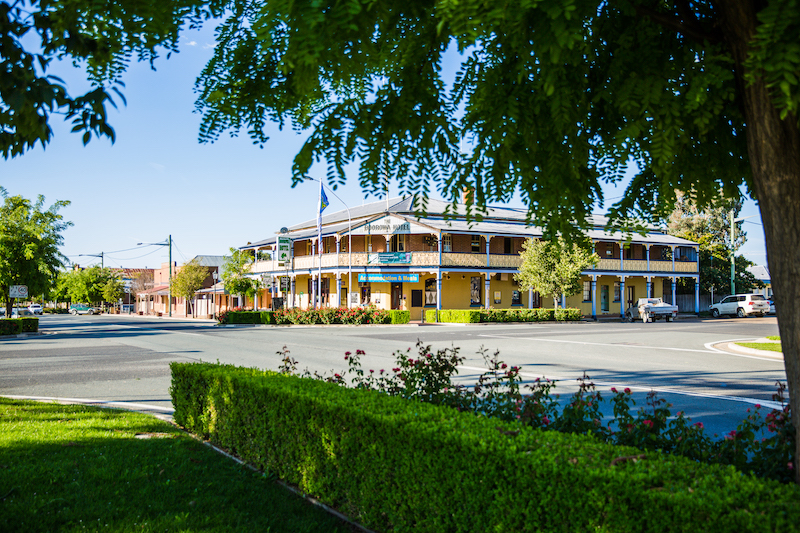 Of the excellent ideas Lyn Diskon has had while travelling to and from Canberra, two stand out. The first lit up in 2012 when she bought a tiny, one-bedroom sandstone cottage in Boorowa. Later, enjoying the country lifestyle in a village of about 1600 people, the second idea blossomed with Boorowa Rotary Club – to open an op-shop.

“Some years ago, the only op-shop in Boorowa had closed down, three or four years before we thought about opening one,” Lyn says.

“Boorowa is on the Lachlan Valley Way, and a lot of people travel between Canberra and Orange, Bathurst and Dubbo or Queensland, and Rotary felt the community was losing out on a lot not having one. I personally travel a lot, stop at op shops and notice many other people do, too,” she says.

Taking on her proposal, her colleagues in Rotary helped work out a plan that has been so well embraced by the community that almost $50,000 in net surpluses has been shared among local charities since the venture opened two years ago.

The amount received by each charity is actually decided by the volunteers who each nominate a charity. The hours they volunteer, as a percentage of total hours, are divided into the funds raised and distributed accordingly.

In fact, the shop took in so many books that the shop next door has been leased, which now stocks abundant publications, vinyl records, CDs, DVDs, games and jigsaw puzzles. 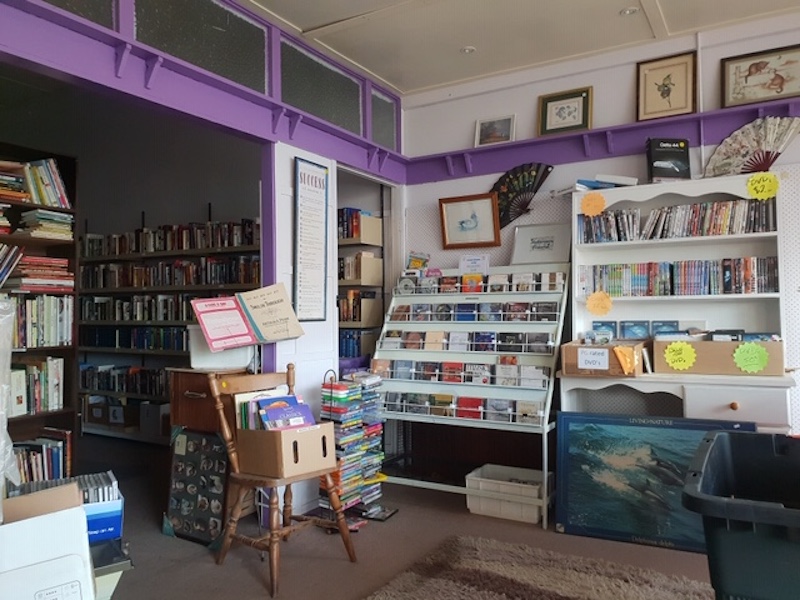 The Op Shop is a major drawcard due to its publications, vinyl records, CDs, DVDs, games and jigsaw puzzles. Photo: Supplied.

Often when a bus-load of tourists or special travellers in cars are coming through Boorowa, a volunteer will open the shop outside the usual opening hours. “For example, there is a lady from Canowindra who loves the book section. She comes through on a Wednesday. She rings, we organise a volunteer to go down, and she spends $200 to $300 on books,” Lyn says. “It is pretty awesome. We are quite excited that that’s how we do it. It is different, but it works for Boorowa.”

There are a few volunteers who do not staff the counter in the shop but do valuable work behind the scenes. One woman washes knitted garments, un-picks them and returns them as balls of yarn.

“This shop has become a whole-of-community project with community ownership,” Lyn says.

Unsold items are either bagged up and dispatched to remote, outback communities, other op shops or Lyn takes them with her to Canberra and leaves them at the Green Shed outlets in Mitchell or Mugga Lane. Some clothes are torn into rags and distributed. Little finds its way into landfill.

Despite now being a Boorowa local and making a great contribution to the community, it wasn’t the plan.

Lyn was living on King Island in the middle of Bass Strait when she decided to look for work in Canberra to be closer to one of her sons.

Her plan was to continue her career in the community sector in the ACT, but Canberra house prices put an end to that idea. Lyn unfolded a map and drew a line between the places her children lived: a son in Canberra, a son in Grafton, a daughter in Mudgee and a daughter in Adelaide. After her pen had landed on the closest central point at Cowra, she set off in search of a home there.

That plan didn’t stick either. Especially after she saw the sandstone cottage in Boorowa. She found everything she needed near Canberra, which had services like an airport and railway station.

“Boorowa is a lovely, warm, friendly community. Country living with city proximity, without the hassles,” she says. “I like the freedom of living in Boorowa; I like the people, it’s a nice place to be.

“My kids and their families were always so widespread but now are much closer. There is still one in Canberra, the one in Adelaide went to Townsville, then Boorowa and is in Tasmania, the Mudgee one is living in Canberra and the Grafton one is living around the corner from me in Boorowa. So, my family seems to have migrated towards me, which is fine,” she says.

Getting involved in the community, especially Rotary, seeing the Op Shop encourage shopping locally rather than money leaving town, and sharing pride in Doctor Kelf Memorial Park, the Old Court House which is now a CWA craft shop and tourist office, the gorgeous bluestone St Patrick’s Catholic Church and restored War Memorial Clock Tower, leave her contented. “It’s one of those towns, you drive through and immediately feel at home,’’ Lyn says. 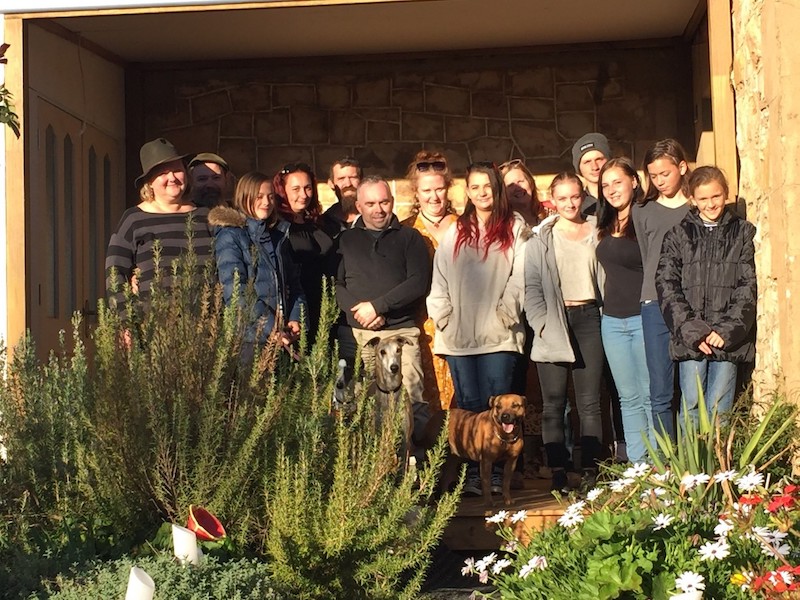 Lyn (sixth from the right) with her family at her Boorowa cottage. Photo: Supplied.

Always said I would like to live in Boorowa 😍

We love Boorowa. The bakery is a must-do! The park is gorgeous. Next time we will be visiting the op-shop.

Sco Mo see this is how you keep money local... It’s not rocket science.

And the scones at the CWA! The best.

Vicki Wilson plenty of books I usually find some when in Boorowa.

Christine Louise Evans is this one of your regular stops?

Anna Sheargold I have been known to swing through... 😉

Definitely lock it in Nikki Duvall

Helen Rennie. Here is an amazing op shop story for you and in my old home town Will have to visit next time you are up!

Bill Brodie a success too ;-)

Great shop,have found many a bargain there

Dale Brittain - 10 minutes ago
Choco Munday i experienced them first hand. I understand what you are saying View
Choco Munday - 12 minutes ago
Um....no. The green lobbyists had the ear of government then, and they will oppose this now, even more fervently. The inner c... View
News 28

Jim Cox - 19 minutes ago
Businesses should be able provide a safe environment for both their staff and patrons. Bring it on. View
whatwik - 1 hour ago
Confidently guessing the overwhelming majority of us will read that as human rights for those who are vaccinated/ doing the r... View
Kate Smith - 2 hours ago
What steps are the conscientious objectors going to bring to the table in the interests of public health? I am all for your c... View
News 33

thatsnotmyname - 54 minutes ago
With the growing population bigger is better. Shame this will need to be scaled back! build it I say. View
James Vetos - 2 hours ago
This is what's wrong with the system. No one in Yarralumla can see this development. The only time would be if you drive past... View
Opinion 3

Chris Duncan - 56 minutes ago
2620 by the Flemington straight View
Craig Jones - 3 hours ago
Great article Tim Gavel, and a very valid argument about two towns that can stake claim to so many sporting champions!!! But... View
News 20

The ACT will start moving away from emphasising the number of people who have been in the community while infectious...
News 20

A kangaroo has been rescued three times in one morning from the freezing waters of Lake Burley Griffin in Canberra....
Property 26

Did anybody seriously believe that the ACT lockdown would not be extended this week, with cases oscillating between the mid-teens...
Community 63

Site work is anticipated to begin this month at the 16-turbine Crookwell 3 Wind Farm, with commissioning expected to commence...
News 62

It can't be a true Canberra suburb without a playground. And sure enough, the new suburbs of Taylor and Coombs...

COVID-19 clean out? Vinnies is getting ready to take your donations

@The_RiotACT @The_RiotACT
Some of your favourite eateries are still churning out the #classics, and as Michelle Taylor discovered, some have become a bit more creative during #Lockdown 2.0 https://t.co/yE0hmPi0IC (1 hour ago)

@The_RiotACT @The_RiotACT
Do you have stories about our town? @thecanberrapage is looking for your photos and ideas about our shared history https://t.co/CI1KWafSmR (2 hours ago)

@The_RiotACT @The_RiotACT
Is Canberra #Railway Station at the end of the line? The Public Transport Association thinks so https://t.co/cRV1Od4jN6 (3 hours ago)