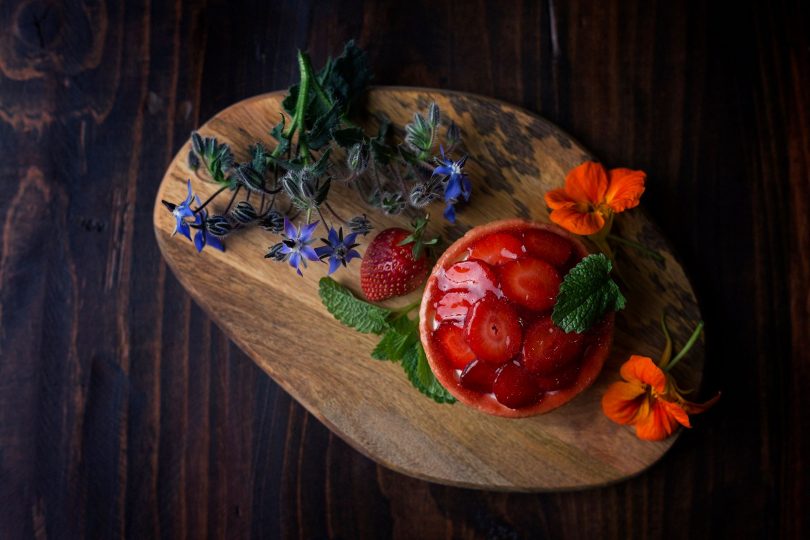 One of the amazing desserts by Baked. Photo: Supplied by Baked.

Baked opened its doors last February introducing the ‘bragel’ to the capital, a cross between a bagel and a brioche.

It’s evolved since it’s initial unique offering in the marketplace and is now fully licensed, open for breakfast, lunch and dinner, and has introduced new dishes which are an intriguing mix of modern Australian and French (no surprise here given that award-winning owners Clement Chauvin and Abel Bariller are both very, very French indeed). Baked has also perked up its interior, making it warm and inviting, with quirky touches like big round cushions shaped like doughnuts and graffiti artwork on its walls. 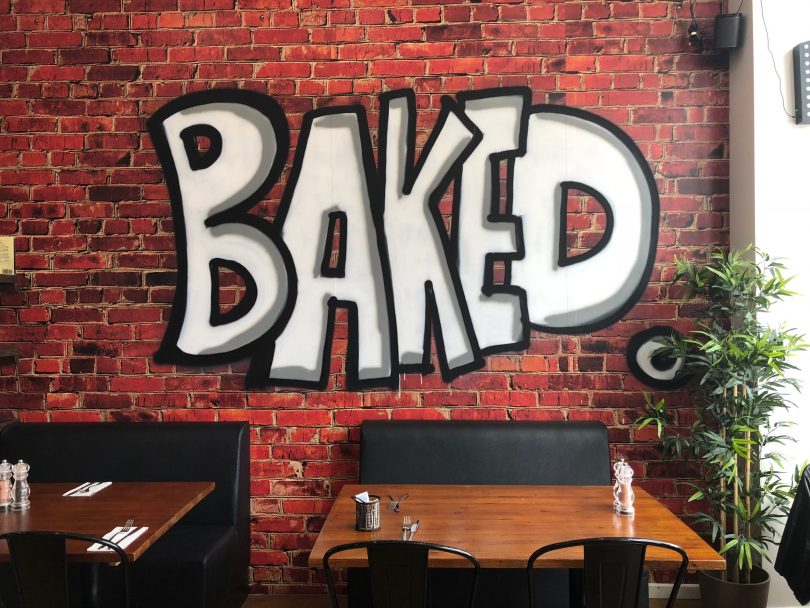 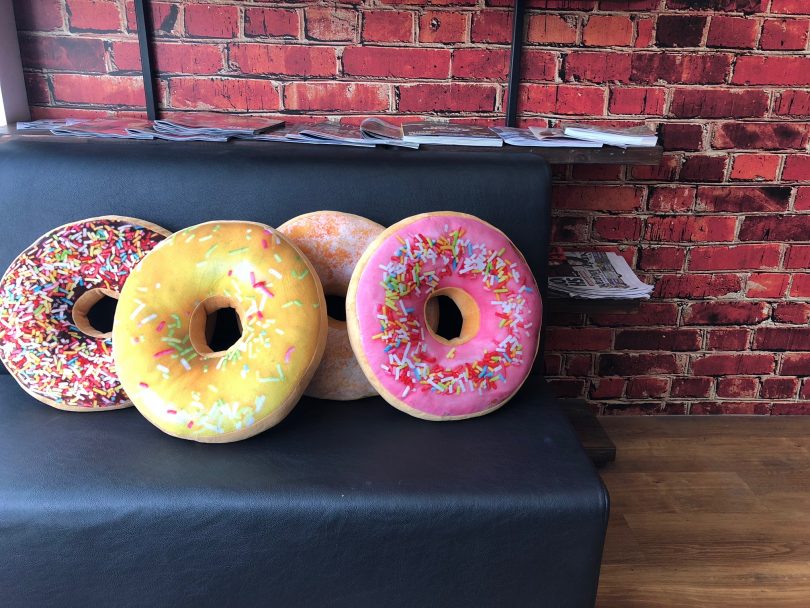 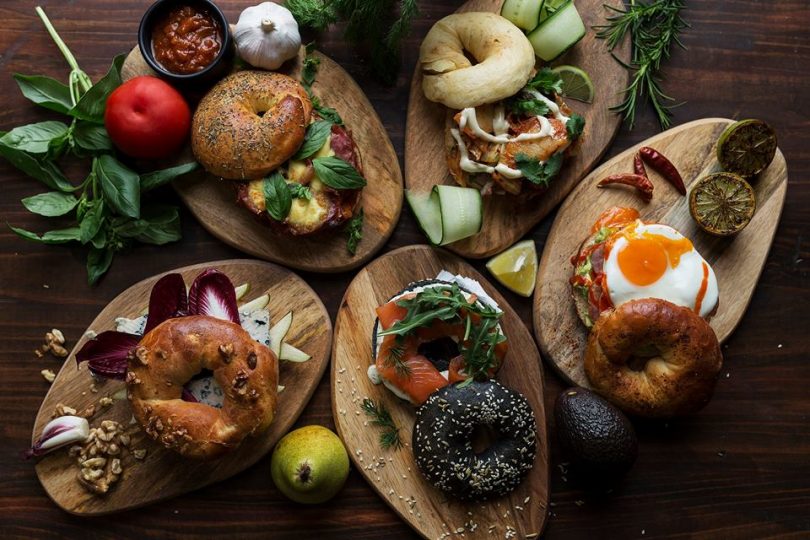 The trademarked bragel. Baked is now so much more … Photo: Supplied by Baked.

“We trademarked the bragel and are proud of that,” says Abel, “but we realised after a short time that we needed to expand the menu, especially when we became fully licensed. The bragels are still a strong feature—we serve them until 2:30. But the menu has broadened.”

Super popular until noon each day is the new breakfast banquet for $22 (minimum two people). “People love to come in and get their coffee right away at breakfast,” says Abel. “Then we serve them freshly baked, buttery croissants with jam. Next is a small dish of granola and mixed berries. Then scrambled eggs on toast with bacon or cheese. And they get a juice.”

Lunch features small and large plates, perfect for sharing. Baked—like its famous big sister restaurant, Les Bistronomes, which is just around the corner—is famous for its rillettes and duck liver parfait.

Baked has pork rillettes on the menu ($6 each) and its parfait is super creamy and served with a sour cherry compote ($16). The cured Atlantic salmon served with ponzu, soy and sesame melts in the mouth and is fun to eat with house-made crunchy squid ink crackers ($19). This is the style of dish that makes Baked so special—the talent in the kitchen loves to create with amazing combinations of flavours.

Small and large plates are on the menu at dinner also, but so is a degustation which will send your tastebuds on a sensational journey. The seven-course chef’s menu is $65 (minimum of two people) and is soooo worth ordering. It’s a hugely popular option for those wanting to sit back, relax and indulge.

Desserts at Baked are phenomenal and include a Vegan Eton mess with coconut yoghurt and berries ($14) and crepes lemon curd and raspberry ($16).

The dessert display at the front has little sweet treats too, for those who fancy just a mouthful or two with coffee, tea or dessert wine. The gluten-free almond cake—a Baked specialty—is to die for.

Abel is an amazing sommelier and so it’s no surprise the wine list has some interesting—even quirky—labels which Baked has deliberately kept at reasonable price points (indeed, some of these wines can be spotted in other eateries around town but diners pay much more for the privilege). 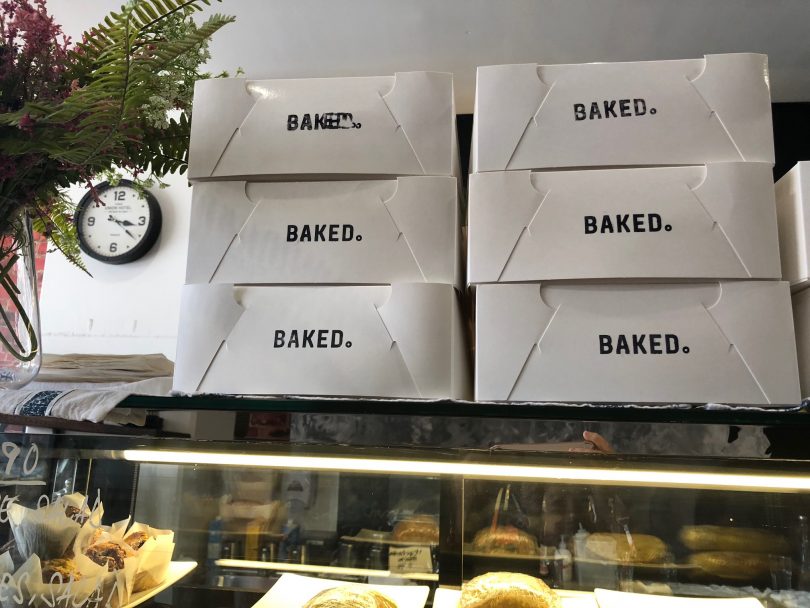 The ambience at Baked is very relaxed, including cool jazz music playing in the background. Dine indoors or in the outside area, which gets good doses of sun.

Sean Jones - 9 minutes ago
Amy Jamieson i’m on my way! View
Chris Davis - 1 hour ago
Hope they check out how Narooma runs it View
Steph Hamleed - 1 hour ago
Melanie Leedham bring the kids to this View
Opinion 46

Steve Hugler - 29 minutes ago
Troy Scott there’s still time for you to make a shot put comeback mate. 3 years and you could be at the Olympics!... View
Liam Timothy-Nesbitt - 2 hours ago
Tariku Fitzgerald-Holmes We’re up there... View
Mark Flack - 4 hours ago
Compare it to a little place call Crookwell in southern NSW ! View
News 35

Dee Kaden - 58 minutes ago
That could almost be 5,400 homeless off the streets!!! View
Slim Hunter - 3 hours ago
Natives or weeds that require watering?🤔 View
Lifestyle 24

@The_RiotACT @The_RiotACT
Chief Minister Andrew Barr has outlined Canberra's roadmap back to normality. Sadly, it comes on the same day the ACT recorded its first death in this COVID-19 outbreak https://t.co/u9YifU91kZ (3 hours ago)