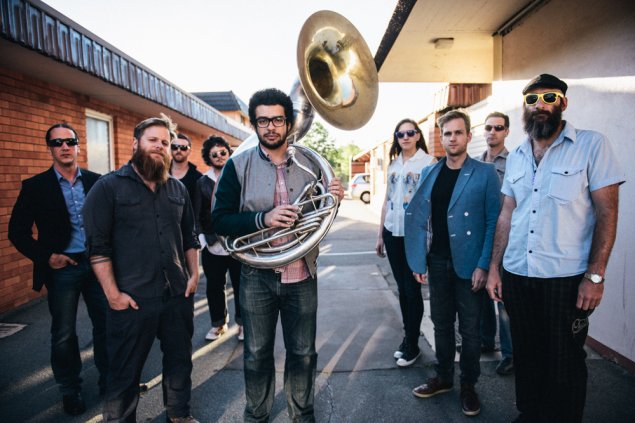 On 27 March 2015, Brass Knuckle Brass Band (BKBB) will launch their debut album Split Lip at Transit Bar. The show will feature a slew of guest appearances as part of BKBB’s set, including local emcees Citizen Kay, Hayds and Roshambo, as well as Bec Taylor, front-woman of Fun Machine and Glitoris.

“A few years ago I talked some friends into doing a Wednesday night funk gig, promising it’d only be one-time thing. Luckily they seemed to forget that part, and we’ve been playing solidly ever since.”

Some of the band’s first bookings included playing background music at craft beer festivals and playing in between poetry slammers while blocking access to the Phoenix Pub toilets. More recently, BKBB has opened for funk heavyweights Charles Bradley and Fred Wesley, and played at Falls Festival and Woodford Folk Festival.

In 2013, BKBB collaborated with Citizen Kay on the single Raise a Glass, which became a Triple J favourite.

“Working on Raise a Glass gave us the idea to get in touch with some other great vocalists for our own record,” Smith said.

“Not just because it’s a hometown show, but it might be the only time we’ll get so many of the album’s featured artists together at once. Add in the awesome Bec Taylor and … look, you should probably just come.”

Split Lip will be released on CD, vinyl and online from 27 March 2015. Visit www.brassknucklebrassband.com for more information.

Max Kelty - 7 hours ago
Bel Lee your housing manager mustn't be doing their job then or else processes have changed. When I was a HM at HACT people w... View
William Coats - 11 hours ago
The land tax was to stop people “land banking” houses should be used as homes not stagnant investments View
Lea Powell - 17 hours ago
William Coats it takes time to change policy directions. It’s not as simple as a click of the fingers. View
News 8

HiddenDragon - 7 hours ago
Some cautionary words here about the limits of battery technology - https://www.abc.net.au/news/2021-02-16/bill-gates-zero-em... View
dulynoted - 10 hours ago
those statistics might be outdated; renewables are getting cheaper and more energy efficient every year as technology improve... View
Capital Retro - 12 hours ago
In which way isn't nuclear power profitable? It depends on which experts you are talking too: https://www.ceda.com.au/NewsAnd... View
Sport 2