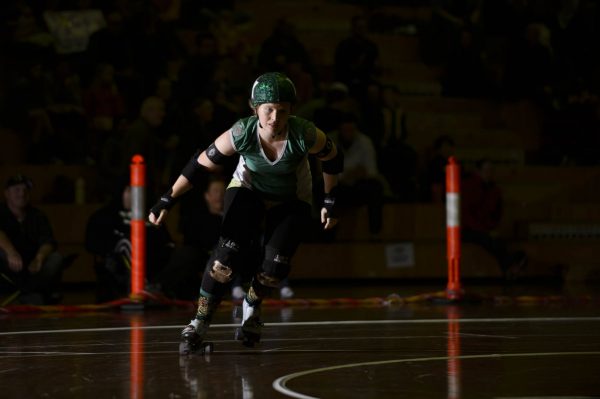 Saturday night’s Canberra Roller Derby League game provided the usual mix of impressive athletic performance in a family-friendly, fun atmosphere, but with a surprise twist in the outcome.

The Brindabelters lost their first game of 2017 to the Black n Blue Belles on 29 April (142 to 131), and finished bottom of the ladder in the 2016 competition. But they have beaten the Surly Griffins in the past, and with fresh talent in the team for 2017, anything was possible. Although all the BentSpoke Brewing Co beers are good, a Brindabella cider seemed like a potential lucky charm while watching the game. 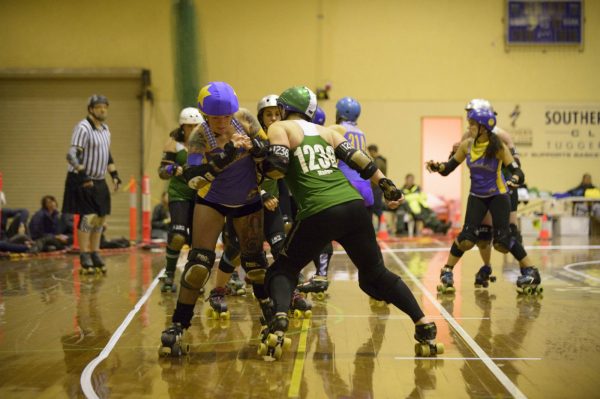 The game opened with the Belters showing energy and tight teamwork to end the first half on 136 points to the Surly Griffins’ 79. This should surely have put the wind up the green dragons, and they came back ready for battle after half-time entertainment by Liz Gregory Irish Dance Academy. 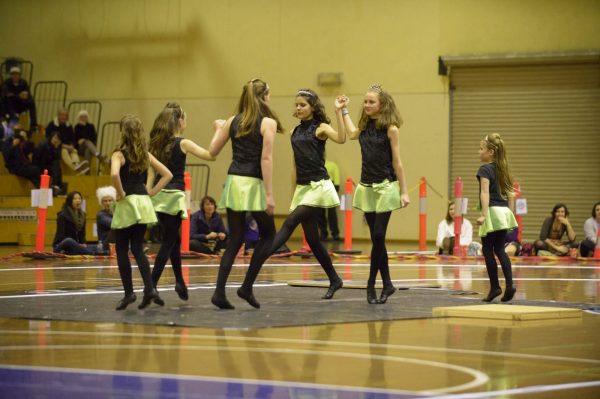 It wasn’t until the Griffins cracked three digits on the scoreboard that the threat they could win felt real. But true to their mountain woman spirit, the Brindabelters maintained a strong lead to the end, winning 234 to 196. The Griffins are to be congratulated for closing the gap from 57 to 38 points in the second half. A few instances of the Brindabelters jammer being sent to the penalty box helped the green team make up the points, with the Griffins jammers using their speed to make the most of the opportunity.

Standout performances on the Surly Griffins included 28 EleStomp – team captain and MVP, and strong skills in evading the Brindabelters blockers; 1236 Madge, a superb blocker who regularly landed purple skaters on the floor; and 0 Laser Station, new to the Griffins for 2017 and showing her skills as a jammer. 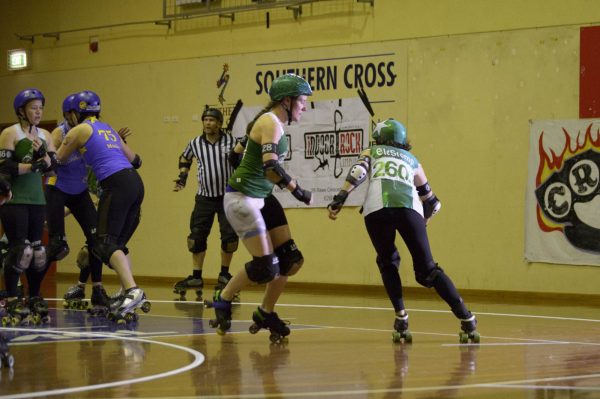 For the Brindabelters, MVP was taken out by Fuzzy Merkin for her skills as a jammer. Seasoned skaters including 88 Berry Bad and 22 Pink Mist were joined by new recruits, with Red Bellied Black Heart 3108 Lady Painicorn putting on the purple uniform for the night. Painicorn’s hip flexibility and agile footwork allowed her to skate sideways through narrow gaps between green blockers.

As a long-time Brindabelters supporter (since the team started playing around 2010), one shows up for games hoping for a win but mentally prepared to say “perhaps next time”. So to see them win reignited this spectator’s hopes that perhaps 2017 will be the year we see our team place first. 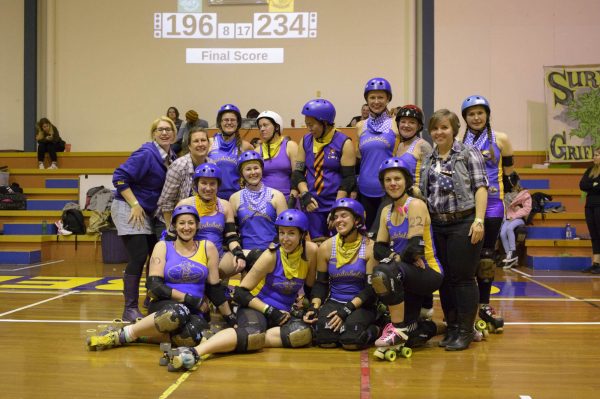 The next Canberra Roller Derby League game will be at Southern Cross Stadium, Tuggeranong on 24 June, when 2016 grand final winners the Red Bellied Black Hearts take on the third-placed Black and Blue Belles.

Mon Thorne - 57 seconds ago
Shannon Denley won’t be ordering during magpie season then hahaha View
Loris Manns - 1 hour ago
I am on the bird’s side! View
whatwik - 1 hour ago
Yes, birds as interceptor fighters, and killer dolphins instead of subs. View
Property 20

Paul Mills - 4 minutes ago
Becoming a common Canberra vista. View
Paul Mills - 5 minutes ago
And when the power goes off, they are stuck. View
Sarah Emmerson - 52 minutes ago
Why push back on this when the suburb over in Coombes looks like a ghetto with their “ vista “ View
Opinion 35

Tim Rozitis - 4 minutes ago
Louellyn Violet sort of agree. I'm an expat Adelaidean who has only ever supported Melbourne (from before Cows existed). My k... View
Tim Rozitis - 13 minutes ago
no. Too much population movement. There's enough expats from footy regions here at any time, but a lot of them are transient.... View
Judith Herald - 25 minutes ago
Sean Chamberlain Chicka Fergerson was a sparky by trade, saw him quite a few times after he retired doing electrical works at... View
Community 20

Lexie Donald - 17 minutes ago
now you know 🤣🤣🤣🤣🤣🤣🤣 View
Greg Myat - 2 hours ago
Their are other types, same size pole but has a round can like container on the top. I saw one with water coming out of it on... View
Opinion 27

JC - 45 minutes ago
I can see the comments from chewy and the blue glasses brigade. Andrew Barr, Labor/Greens don’t care for business, taking t... View
chewy14 - 2 hours ago
I agree Whatwik. It's lucky they'll all be bankrupt due to the lockdown shortly anyway. Well done ACT Government, who needs S... View
Opinion 9

Andrew Bell - 56 minutes ago
Peter Hislop There is actually a map indicating an Airport-Kingston-QBN light rail ... all part of an integrated transport pl... View
David Malcolm - 1 hour ago
The most practical way to improve the Canberra services would be to eliminate ALL the Southern Higlands stops other than Goul... View
News 140