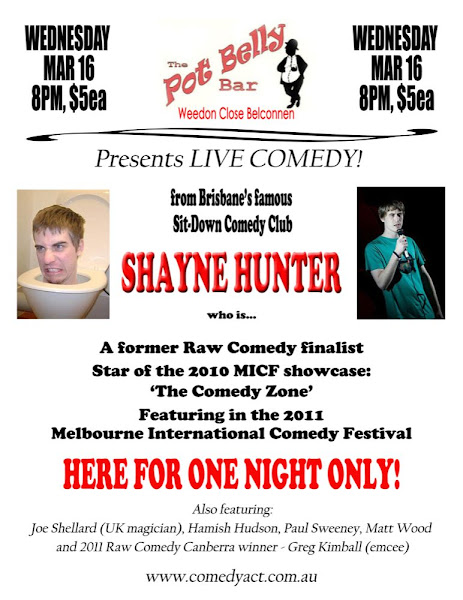 Hunter, a regular feature at Brisbane’s famous Sit-Down Comedy Club, will headline the Pot Belly for one night only, supported by an array of local acts including UK magician Joe Shellard, Hamish Hudson, Paul Sweeney, Matt Wood and 2011 Raw Comedy Canberra-winner, Greg Kimball who will be the emcee.

Hunter, a former Raw Comedy finalist and a regular MICF performer, is one of Brisbane’s finest young comedians and describes his style as ‘socially relevant, with a lot of dick jokes’. The show starts at 8pm and admission is $10 at the door.

Charlie Karmenu Flask - 4 minutes ago
If it walks like a duck, quacks like a duck...it's a duck!!! View
David Jackson - 2 hours ago
This is what happens when the loonies are running the asylum! Seriously it’s a correctional centre or prison. What a waste... View
Mark Huppert - 2 hours ago
If elected, the Libs will still have to operate prisons, maintain roads, pay police, maintain hospitals etc etc. Plus they wa... View
Lifestyle 39

Phạm Quới-Chi - 1 hour ago
We spotted not just one , but three black cockatoos in Isabella Plains 😍 View
David Ironside - 4 hours ago
Tracey Ironside yes there a few around Fadden recently View
Sandy Gibbs - 5 hours ago
Kathy Little Suzy Obsivac these are the ones we saw on our walk today. Timely article!... View
Property 40

Jp Romano - 2 hours ago
Margaret Welsh move somewhere backwards. Apartments are the future. View
Margaret Welsh - 5 hours ago
Yes, and I'm not a Liberal voter these days. I hate the number of apartments. When we downsize we'll be moving out of the ACT... View
watto23 - 8 hours ago
So why can't the liberals provide a solution to this problem. They are very good at pointing out everything Labor does wrong,... View
Opinion 1

@The_RiotACT @The_RiotACT
Claims of light rail contract mismanagement, disappointment for football fans & Soviet-style security cameras are just some of the featured stories in this week's RiotACT newsletter https://t.co/zoDivBOaVB (38 minutes ago)