Monsters loomed over the ground and wiggled their fingers alarmingly, Nick The Pig spoke fondly of Dubbo, the cute Waratah’s fan in front of us progressively lost her voice and became despondent.

And the ACT Brumbies tore the NSW Waratahs a new arsehole 36-10 with Bernie Larkham dominant.

Coverage: Keo was impressed. RugbyHeaven has Rupert Guiness enthusing and Growders trying to get back into Larkham’s good books. PlanetRugby also thinks the Brumbies looked good. 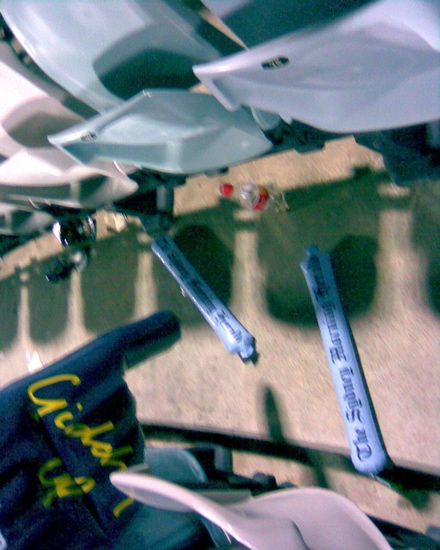 And the Waratah bang sticks were left where they belong, until we came along and jumped on them.

UPDATED: Thanks to StevePedestrian for pointing out the video of the Wooden Spoon he put on YouTube:

ANOTHER UPDATE: And here’s some YouTube of the tries, Brumbies are last in the set:

Yeah that spoon thing was great!

It was wunnerful. Trooly rooly wunnerful. I gloated over what the lads did. I irritated the daks off my NSW rellies.

And then I thought a bit about whether 2008 is going to be a darn long year … and whether I want to fork out hundreds for a season ticket so that I can pay $5 for parking a million miles away because some parking is left for people who arrive late(!), $7 for a pretty orinary program, sit in an uncomfortable seat being disturbed by people trying to get in or out of their seats (one bloke was up and down four times in the second half), have the view interrupted by dopes who stand like sheep in the aisles trying to work out why their seat is actually in another block, pay a fortune for seriously awful food, get inconsistent quality curtain-raisers and then some lousy half-time entertainment. (Not last night, though, the Federation guard was good viewing before the game even if the thing with the guns at half-time was a bit confused) Oh, and the babbling idiot interviewing babbling members of the public on the game screen that could be used to show the curtain raiser, or highlights of other games this weekend or whatever. Maybe not.

That was awesome last night.. Great work to old mate in the crowd who had a big wooden spoon with NSW written on it.. Excellent

Bernie at his best

Give Bernie & Georgie the keys to the city.

It was indeed Mike from Monsters Inc. Even had the logo on his hat.

I’m not a Brumbies fan at all but I still love seeing them beat the Waratahs, not just beat them but annihilate them…

Karan Campbell-Davis - 2 hours ago
That's right, build more of those ugly, high density dog boxes, just like Sydney! 🙄 View
William Coats - 11 hours ago
what impact will further development in the Sullivans Creek catchment have on future flooding in Oconner and Lyneham. These a... View
Community 5

Donna Ainge - 10 hours ago
Hi Julie-Anne. Where in O’Connor did you live? Hakea Cres by any chance? View
Dot Willcoxson - 13 hours ago
Suzanne Huntley Doug has posted a comment further down. The neighbour he refers to was Frank Machutta who lived across the ro... View
Doug Willcoxson - 13 hours ago
A neighbour of ours in Pearce was on his way home that night and was behind the cars that were washed away. He was passed the... View
News 13

Zakzook Chico - 10 hours ago
Patrick J Pentony couldn’t agree more View
William Coats - 11 hours ago
So after 20 years this Labor Greens Government is ready to promise action. I guess we will have to wait and see. View
Patrick J Pentony - 11 hours ago
Rheyce Spears we are at the start of the twentieth year of labor greens gov in the ACT. Not sure you can really blame anyone... View
Opinion 3

Ash David - 19 hours ago
Poor roads (Monaro Hwy especially), rubbish not collected for weeks, grass over a metre tall on the side of our roads. I have... View
show more show less
*Results are based on activity within last 7 days

@The_RiotACT @The_RiotACT
Canberra used to be like a big country town, but maybe we've become less friendly as we've grown. Zoya Patel asks, is Canberra too cliquey? https://t.co/Np4d6WUC2v (10 minutes ago)