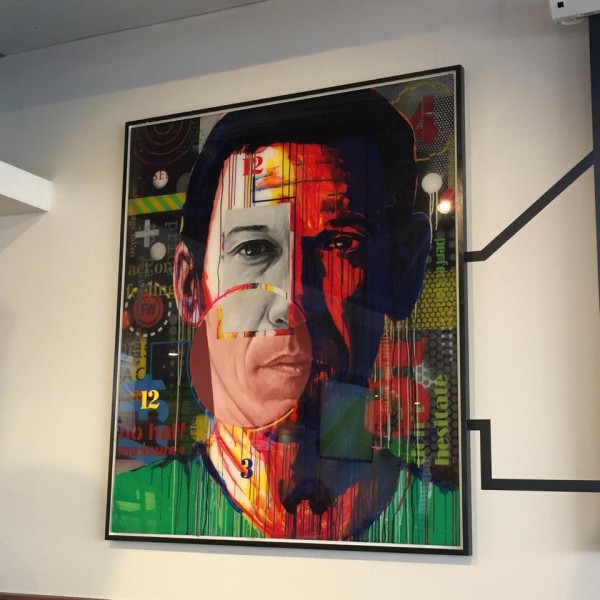 RiotACT has this week introduced a new series that will run throughout the Super Rugby season, where we interview the Brumbies man of the match following each home game.

Brumbies prop Ben Alexander had plenty of reasons to be pleased last week. His team was on the top of the ladder after its 27-15 win against Perth’s Western Force and he was awarded man of the match. As a result, $500 will be donated to the charity of his choosing, the Amy Gillett Foundation.

Though Ben isn’t a cyclist, he says he has chosen to support the Amy Gillett Foundation to help make cycling-related fatalities a thing of the past.

“Canberra is an active city and there are lots of cyclists on our roads. We’ve got good cycling infrastructure and cycle paths but that doesn’t mean that accidents don’t happen.”

He says that fans who want to do more to support the Amy Gillett Foundation should consider purchasing the portrait of cycling great Robbie McEwan (pictured above) currently on display at The Dock on Kingston Foreshore, of which he is a co-owner.

The reserve price is $8000, but if that’s out of your price range he says you can always buy the postcard for a small donation to the Amy Gillett Foundation instead.

Different athlete’s portraits are rotated on display at The Dock and sold to the highest bidder, with money raised going to a charity of the athlete’s choice.

The next Brumbies home game is on Saturday 4 April 2015, when they take on the Cheetahs at GIO Stadium.

Good to see there’s going to be another series. I really like Local Leaders and Cheap Eats and the balance between news and regular features at the moment. I”m not a huge sports fan but it’s interesting learning a bit more of the stories behind the players.

Lorna Towers - 32 seconds ago
You couldn't afford all the meat you get at a real Brazilian BBQ. View
Jodie Sharples - 3 hours ago
Julie Warren this answers our questions from yesterday View
Amy Stewart - 13 hours ago
Mark Turner this is what we drove past… View
Opinion 17

Julie Macklin - 2 minutes ago
Dingo Dom Shanahan No, the bus interchange needs to be better incorporated into the centre of the city, not removed. More peo... View
Richard Orchard - 31 minutes ago
Retail space is always troublesome to rent out- it’s either that landlords want rents and leases, with personal guarantees,... View
chewy14 - 4 hours ago
JC, $60million a year for one stage of light rail that services a tiny minority of the population. With the government commit... View
News 63

Finagen_erection - 47 minutes ago
It’s simply a result of poor investments by governments (plural) and failures in leadership within CHS. The CEO has quit, t... View
Kimmy Hunter - 2 hours ago
Well your very lucky because I had a family member told they can’t access nsw health and had treatment refused View
JC - 5 hours ago
Christian your $35 is not a co-payment that is you paying your doctor more than what Medicare pays then. The proposed co-paym... View
News 12

@The_RiotACT @The_RiotACT
@CSIRO has proposed a new National Collections building to be constructed at Black Mountain Science and Innovation Park in Canberra at a cost of $70m https://t.co/74MuQPOFXA (21 minutes ago)

@The_RiotACT @The_RiotACT
Messages of condolence are flooding in for the family and friends of a Canberra man killed while watching the Finke Desert Race near Alice Springs on Monday https://t.co/sDzPaNDQvg (41 minutes ago)