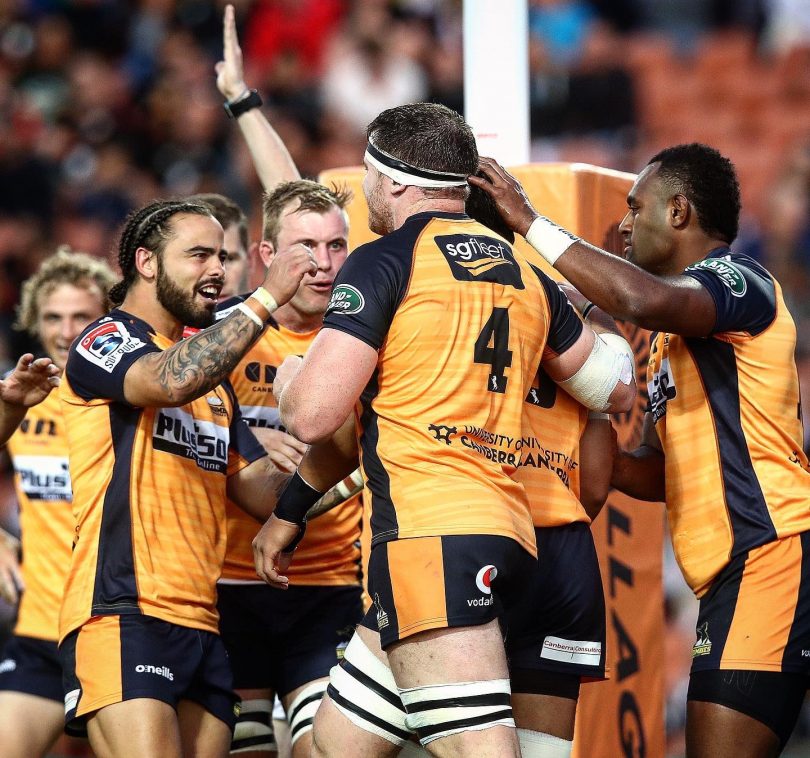 The Brumbies collected their first win against the Chiefs in New Zealand for the first time since 2007. Photo: Brumbies.

Having not defeated the Chiefs away from home since 2007, crossing the ditch for Saturday night’s Super Rugby encounter was a battle as much with the Chiefs as the weight of history. That the Brumbies turned the tables with a 26-14 win will be one fans long remember, and it wasn’t the only record they overturned.

The win saw Dan McKellar’s side put an end to their 13-game losing streak against Kiwi opposition, having gone into the contest without a victory since their March 2014 win against the Hurricanes.

The victory also dealt the Chiefs their first loss of the season after starting the 2020 campaign three from three.

The cornerstone of the visitors’ win was getting off to another fast start, which led them to a 19-0 scoreline at the half and the Chiefs not getting out of second gear until the second interval.

Coach Dan McKellar was pleased to end his side’s troubles in New Zealand in a week of disrupted preparation due to an outbreak of mumps among the team and support staff.

“2014 was the last time we won over here in New Zealand, so we’re really glad to get that monkey off the back,” McKellar said.

“We’ve had some challenges this week but this club is built around resilience and we’ve shown plenty of that over the last 10 days and to come over here against a quality team and get a result on their turf is incredibly pleasing.”

The Brumbies hot start saw them open the scoring in the 9th minute of play after fullback Tom Banks found a bit of space to score near the corner.

Winger Solomone Kata would then extend his side’s lead six minutes later to 14-0 as the Tongan capped off a brilliantly executed play for the 25-year-old to notch his second try of the season.

The Chiefs were dealt another blow as the half time whistle approached when Pete Samu’s quick and smart thinking caught out the Chiefs’ defence following a penalty from a Brumbies scrum.

Noah Lolesio then converted Samu’s try to put the Brumbies up 19-0 at the break as the hosts struggled to contain the Brumbies threatening attack for the first 40 minutes.

The Australian club continued their surge two minutes after half time to make it 26-0, with Samu showcasing his ability by breaking through three tackles to score underneath the posts.

Fly-half Aaron Cruden finally gave the home faithful in Hamilton something to smile about when he crossed over in the 48th minute and reduced the deficit to 26-7.

Television match officials were then brought into proceedings in the 53rd minute and that led to the referee giving Brumbies’ James Slipper a yellow card as the Chiefs looked to swing the pendulum in their favour.

A couple of minutes later saw the Kiwi team break through a resilient Brumbies defence, with Tom Lienert-Brown scoring his first try of the season and the converted try taking the score to 26-14.

The Brumbies managed to disrupt the Chiefs brief patch of momentum to see out their third win of the campaign, with both teams now three wins and one loss through their first four games.

Anna Ji - 19 minutes ago
He deserves a pedestal for his sport. His views should not impact that, especially when it's just his perceived views by one... View
Vasa Krculj - 22 minutes ago
Novak, a great sportsman and a generous human being who donated $1 mil. to the NSW bushfire victims. He must be the first spo... View
Evan James - 8 hours ago
Well said, Tim!✔ View
Community 107

Steve Aust - 48 minutes ago
Colin Parton tell 1 story here View
Louise Flint - 1 hour ago
James Daniels I was sent there for advice before I took a redundancy package. They ignored my superannuation and taxation que... View
Patrick Barrett - 5 hours ago
Dylan your fault View
News 22

@the_riotact @The_RiotACT
You're #vaccinated and #boosted, you wear a mask, socially distance, wash your hands and sanitise, but as Zoya Patel discovered, you can do all the right things and still get #COVID https://t.co/LTSsyklfol (19 minutes ago)