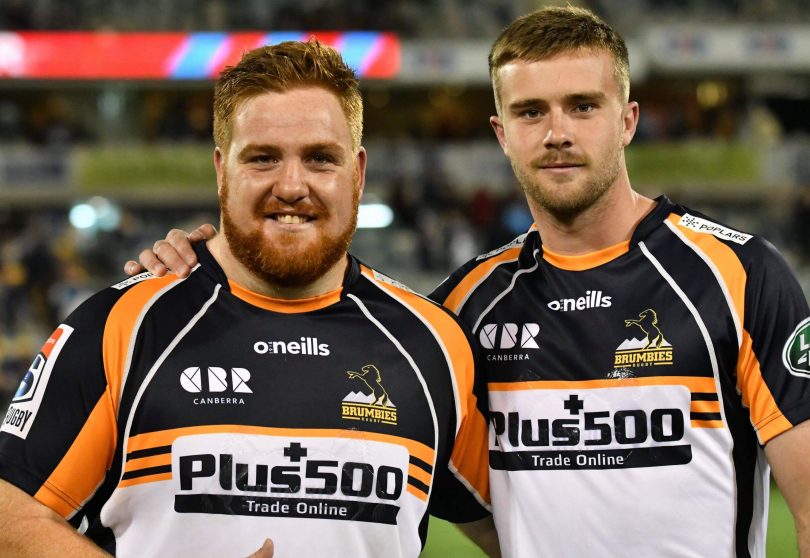 Mack Hansen (right) was one of the players to test positive for mumps after an outbreak among players and staff. Photo: Jaye Grieshaber.

The ACT Brumbies’ haven’t beaten the competition-leading Chiefs in New Zealand since 2007 and their preparation for this weekend’s match in Waikato just got harder after Rugby Australia confirmed several cases of mumps among the team’s players and staff.

“The initial testing conducted last week was inconclusive, with the second wave of testing confirming the presence of the virus amongst some players and staff,” the Rugby Australia spokesperson said.

The Brumbies have been in consultation with ACT Health, Rugby Australia’s chief medical officer and SANZAAR (South African, New Zealand and Australian Rugby) to manage the situation.

Only staff and players who are completely well have been given the all-clear to tour for the team’s fourth-round match against the Chiefs in Hamilton.

Coach Dan McKeller was forced to miss a training session this week for the first time in seven years, while two coaches and some staff have been diagnosed with the mumps despite all being immunised against the disease.

Four players – Irae Simone, Bayley Kuenzle, Darcy Swain, Mack Hansen – were also diagnosed with mumps and missed last weekend’s game, an agonising one-point, last-minute loss at home against the Highlanders. They have since been cleared to fly to New Zealand today for the game this weekend.

Another two players have been quarantined as a precaution but have not been diagnosed with mumps. Immunisation booster shots have been given to all team and staff members, while anyone showing signs of illness has been told to isolate themselves.

Rugby Australia also imposed a number of measures to prevent the spread of the virus. This includes immediately isolating all players or staff who are suspected or confirmed as having symptoms of the virus for at least five days.

All Brumbies’ players and staff, as well as their partners and children, must have their immunisations up to date, and those identified as being at risk of infection because of the outbreak must have MMR (measles, mumps, rubella) boosters.

All Super Rugby franchises have also been asked to check the immunisation status of all players and staff and provide MMR boosters to anyone who has not previously received two doses of mumps-containing vaccine at least four weeks apart.

The only players or staff who are considered to be immune for the purpose of travelling are those who have completed their isolation period of five days from the onset of symptoms.

“Additionally, the travelling group will be asked about symptoms prior to boarding the flight and anyone with symptoms will not board and will remain in Canberra for testing and isolation,” the Rugby Australia spokesperson said.

“Once in New Zealand, if a Brumbies player or staff member becomes unwell, they will immediately be isolated in a single room and testing will be arranged. They will need to remain in isolation for five days from the onset of symptoms in New Zealand if they return a positive result for mumps.”

Rugby Australia has contacted all of the Super Rugby teams, while each of the teams the Brumbies have played in recent weeks (the Queensland Reds, Melbourne Rebels and Highlanders) are monitoring their staff and players, with no further reported cases to date.

Rugby Australia, SANZAAR and the Brumbies, as well as ACT Health and relevant public health authorities in New Zealand, will continue to monitor the situation.

The Brumbies will take on the Chiefs in round four at FMG Stadium in Waikato on Saturday night at 5:05 pm (AEDT). If the Brumbies win, it will be their first victory in New Zealand since 2014.

We will be in NZ cheering them on, Go Brumbies 🐴

Oh heavens. So they didn’t have up to date vaccinations ?
I thought this was one the guys had because of the complications to their virility if they got MUMPs as an adult

Aldith Graves the article states they had all been immunized, and some have recently had booster shots.

Just change their name to the Mumpies……