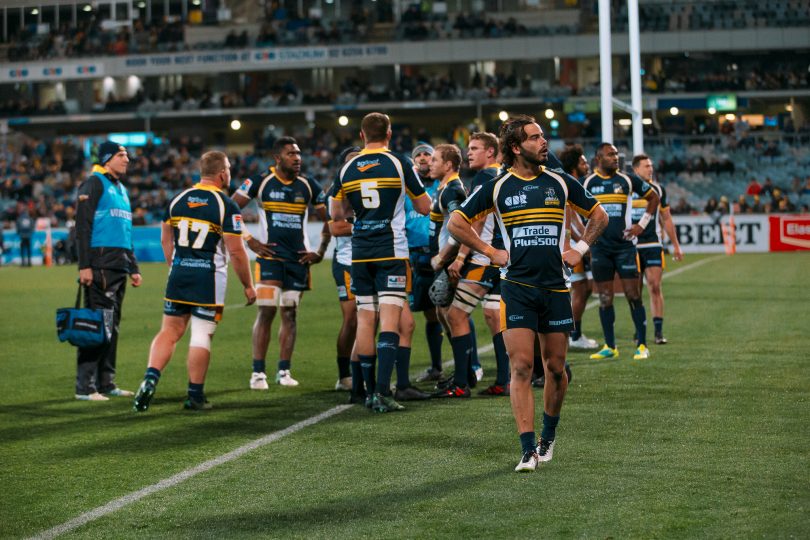 The Brumbies will head into the 2019 season with a squad of 36 players, down from this year’s squad of 39. Photo: Photox.

With the Brumbies having only a slim chance of making the Super Rugby finals, this week is looming as the current squad’s last week together as the club moves to a smaller outfit for next season and some players seek opportunities elsewhere.

The Brumbies will let go ten players at the end of the season and will cut the squad from 39 to 36 members, with at least six new signings to come after loose forward Peter Samu was secured from the Crusaders in May for next year.

The Brumbies’ finals chances are still alive in the last round of the season but they need a bonus-point win over the Waratahs at Allianz Stadium on Saturday and other results to go their way.

The Highlanders have to beat the Rebels in Dunedin on Saturday afternoon and the Sharks must lose to the Jaguares in Durban in the early hours of Sunday for the Brumbies to have any chance of snatching the last finals spot.

Wallaby prop Allan Alaalatoa said the squad had mixed emotions heading to Sydney to face their arch-rivals, with a fair bit of excitement mixed with sadness. He said the outgoing players were farewelled at dinner last night (10 June), as the Brumbies look to build their squad ahead of next season.

“There are a few boys leaving us this year and it may be our last game together this weekend,” Alaalatoa said. “The drive for us this week is to do well for our brothers who are leaving the squad.

“We try to build our family here for the minimal time that we have, and thinking about it now, it could end this weekend and maybe this week is the last time the boys will train together.”

The 24-year-old said that the players leaving were “the boys that you don’t see on camera” and the “ones that do all the hard work behind the scenes”.

“It is obviously a sad time for them but also creates another opportunity for them to go elsewhere and continue their career,” Alaalatoa said.

“We still have a game this weekend, and we are going to go out there and play for each other. We spend a lot of time together, off and on the field, and we create those good bonds that we will still have when they continue their career elsewhere.”