Brumbies Trial against the Hurricanes 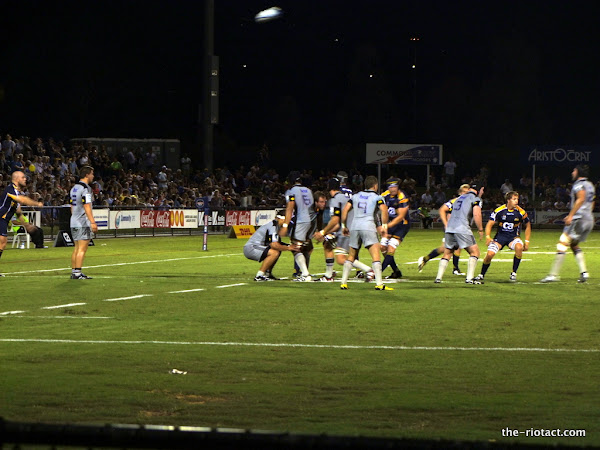 Last night was the little publicised trial match for the Brumbies against the Wellington Hurricanes, a side bristling with All Blacks and stupid colours boots.

The publicity didn’t matter, if there had been many more people there it would have become uncomfortable.

On a balmy evening it was great to sit on the grass, partake of $4 boags, and assess the 2011 vintage of the Brumbies.

Playing out a 21-21 three try apiece draw made for an entertaining enough match.

It’s also worth noting that trial form should never be over-estimated. They’d be mad to use their best set piece moves before there are competition points on the table.

But while the Brumbies are promising to attack more this year they still seemed to lack the guile to create overlaps.

Matt Giteau ran at the line too much for a fly-half in my opinion, although it was great to see him cut loose a few times, but even then he rarely linked up with supports before going down in the tackle.

The service from half back also seems stodgy. with a bit of luck they’re foxing and we’ll see a different side when the season starts.

For those who haven’t been to Viking Park in Erindale here’s a slideshow of the evening. At $10 a ticket and with reasonably priced food and drink it’s not a bad way to spend an evening at all.

RugbyHeaven have a write up of the match.

You can’t go wrong with $10 entry and $4 beers. Almost makes you reminisce about the good old days when you could get a ticket to a Brumbies match and have a few beers at Bruce Stadium for a lobster.

Always one of the highlights of the sporting year for mine, a warm night, sun setting over the Brindabellas behind the stand, cold beer, friendly knowledgeable crowd, gelato.

Nonu was awesome. Brumbies couldn’t clear the ball for quids with Vito doing sterling work. Couldn’t blame the halfback then, but could for stupid decisions to box kick for no result.

Wrong side of town for me.

Good to see the Brumbies improving after previous trial results.

DJA - 3 hours ago
Don't see any blueys in the backyard, but do see dragons (I think they are jacky dragons) and cunningham skinks. View
News 1

Michael Ilsley - 6 hours ago
How lucky are those children going to be being taught by such an incredible person. View
Rhonda Maxwell - 10 hours ago
Brad is an amazing young fella who is living a full life. His family and friends are s wonderful support as is his footy team... View
Pam Perkins - 10 hours ago
A very inspiring young man all the best in all your future endeavours and wonderful community support... View
Community 10

John Beagle - 7 hours ago
100% correct Gordon. The toilets are a disgrace. They appear to be the original 1999 edition, and the only illumination is on... View
News 6

Acton - 7 hours ago
I use a trap which is effective in catching individual wasps and discourages nesting. The trap uses a European wasp attractan... View
Ricky Gill - 22 hours ago
Same as getting burnt the sting from these buggers😞 View
Opinion 54

JC - 8 hours ago
It was a private facility unlike those in Kambah which you describe. The only fault of Government here is that they have let... View
Simon Noffke - 20 hours ago
Sad to see the end of memories coaching there many many years ago View
Community 4

aussie2 - 21 hours ago
Firstly I would be challenging directing all southbound traffic to Woden interchange. We are spread out. Surely those outside... View
chewy14 - 23 hours ago
I actually like what they are proposing here and I think integrating the CIT into the new development space is a sensible mov... View
show more show less
*Results are based on activity within last 7 days

Why Brumbies’ Sammie Wood wears a yellow ribbon in her hair

@The_RiotACT @The_RiotACT
Despite their scary appearance, blue-tongue lizards are laidback and loved in Canberra. Ian Fraser asks if there's a familiar bluey in your backyard? https://t.co/pTVszMYre7 (5 hours ago)