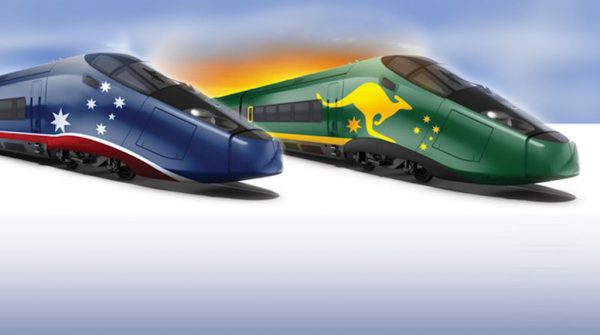 Canberra is being left behind in the high-speed rail stakes according to the founder of the Bullet Train for Australia party. Tim Bohm and his supporters, who launched the party in 2012, deregistered it as a political party on Wednesday, saying it has served its purpose. Instead, the Bullet Train group will be a community advocacy group, campaigning much like GetUp! does.

Mr Bohm said other regional centres were more active than Canberra pushing for a fast train. “Shepparton is pushing hard for a Melbourne-Shepparton-Albury route, Newcastle-Central Coast-Sydney could be the second one and Brisbane- Gold Coast-Lismore could be the third. Canberra could miss out altogether.

“It is not helped by (Chief Minister) Andrew Barr jumping on a train and banging on about getting it down to three hours. He should be focussed on putting time and effort into making sure we are one of those three business cases,’’ Mr Bohm said, referring to Mr Barr’s recent rail journey to Sydney.

Deregistering the party removes the politics from the group, allowing members to pressure and work with all levels of government, stakeholders and other political parties to get the first high-speed rail line built and running.

The Bullet Party formed in 2012 and won more than 4 percent of the vote at that ACT election. From there it grew into a national entity, fielding 17 lower house candidates and senate candidate federally in every electorate along the proposed high-speed rail route from Melbourne.

ACT members changed course in 2015 to contest the ACT election in 2016. “We deregistered the Bullet Train for Canberra Party, and ElectionsACT would not let us register another party with a similar name,” Mr Bohm said.

Broadening the focus, under the banner Like Canberra, was not a good move. As well, three disgruntled members called for an audit of the books.

“We don’t even know what their motivation was, we gave them everything they wanted and they just went off and tried to make as much noise as they could. That’s when we really thought we were a fair dinkum party, when we had our own Mark Latham/ Kevin Rudd situation,’’ Mr Bohm says.

The father-of-three and Canberra small business owner says more than half of the party’s 564 members come from outside the ACT.

Mr Bohm says the group did not need a lot of money or advertising to be effective. “We could be very powerful, without any money in the bank. We tried the other way, now we have to try something new.’’

Mr Bohm says busy air traffic routes and capital cities growth continued to build a compelling case for high-speed rail. In the coming weeks, Bullet Train for Australia new look website will come online. HSR supporters from all parties will be able to use a variety of tools to pressure and register their views on the need for high-speed rail for their communities and cities directly with their local, state and federal politicians.

“Mr Bohm said other regional centres were more active than Canberra pushing for a fast train.”

To the extent that this reduces the chances of Canberra becoming a dormitory suburb of Sydney, it is good news for people who care about maintaining (at least some vaguely) affordable housing in Canberra/Queanbeyan.

By comparison, a quicker and more reliable conventional rail service between Sydney and Canberra/Queanbeyan has the potential for practical benefits at moderate cost.

Wasn’t Barr talking about a 2 hr train trip? And were these guys involved somehow in that private HSR project that proposed conjuring large new rural cities out of thin air and using land sales to pay for it?

Jon Rooks - 9 minutes ago
I'm glad Belconnen is being further developed as a community hub. My main concern are the single lane 'spokes' (like Bindubi)... View
Elspeth Shannon Rollason - 7 hours ago
All these buildings. If families move here then where are the playgrounds for kids to be active? What is being done about saf... View
News 3

David Stephens - 5 hours ago
In the Heritage Guardians submission to the recent NCA consultation process, we said this about how the Memorial consults: "N... View
Stephen Saunders - 5 hours ago
Mr Anderson, it is laughable to quote a skewed “survey” of punters already visiting AWM. Ms Barnes, as ever, a puppet. Ga... View
Property 1

@The_RiotACT @The_RiotACT
Discover what Kent Nhan from XO and ILY loves about #Canberra dining and what's in his own pantry https://t.co/RtSwUJSBZF (31 minutes ago)