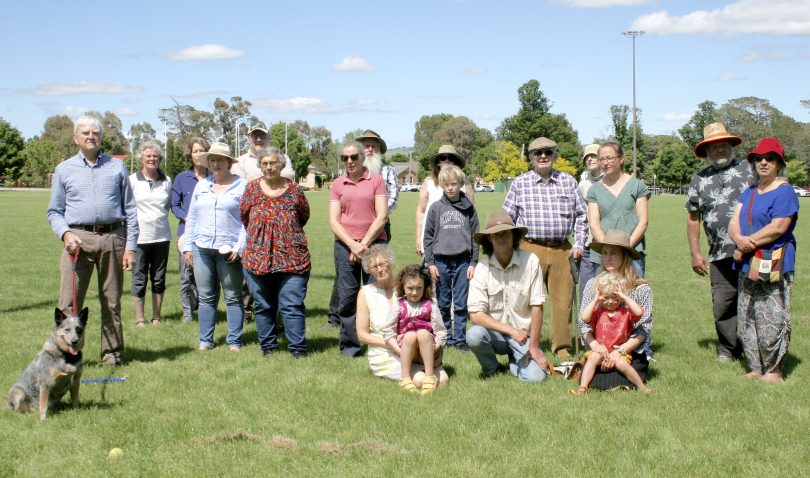 Some of the Bungendore residents who say more consideration needs to be given to the high school proposal after meeting to discuss the proposed site on Saturday (14 November). Photo: Angie Angel.

A group of Bungendore residents say time is running out to ensure the best outcome is achieved for the Bungendore High School project, with a number of concerns being raised about the selection of the site and the potential loss of heritage aspects in the town.

The Bungendore Park Action Group has raised a petition outlining what it says is a “compelling case” for Queanbeyan-Palerang Regional Council (QPRC) to reconsider its in-principle support for the NSW Department of Education’s plan for the school which was endorsed during a Council meeting on 28 October.

The residents say no consideration has been given by School Infrastructure NSW to alternative sites in a rural area surrounded by appropriate spaces, with the Department of Education (DoE) and Member for Monaro John Barilaro accepting Council’s push for the proposed site in the heart of Bungendore, known as the Majara and Gibraltar Street precinct, adjacent to Mick Sherd Oval.

A section of Mick Sherd Oval will be lost to make way for the high school, along with a number of QPRC assets, including the nearby swimming pool and Bungendore Community Centre and the Bungendore Park. The proposed Abbeyfield senior housing development will be relocated to 2 Majara Street. 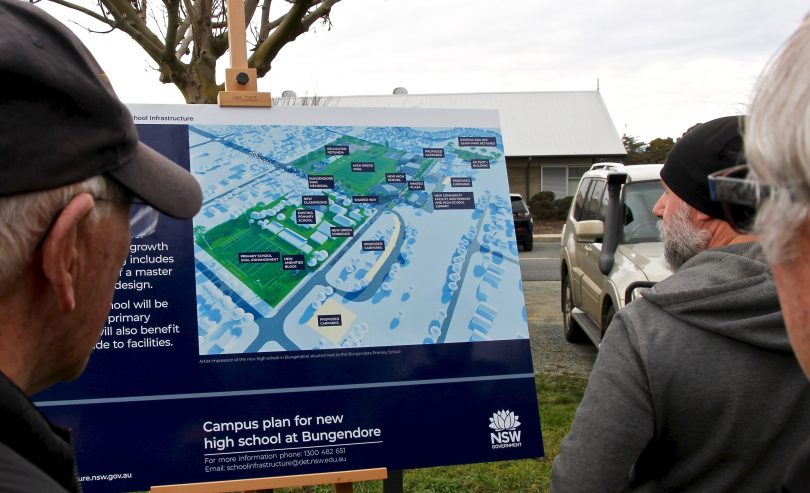 “Council should not allow itself to be bullied into continuing engagement with School Infrastructure NSW. It is running out of time to ensure the best outcome for Bungendore,” said Bungendore Park Action Group spokesperson Stuart Gregory.

Mr Gregory also said there is division within Council where the motion to endorse the DoE proposal was passed six votes to four, with at least one councillor warning that QPRC shouldn’t accept a proposal that hasn’t been fully considered.

He added that the DoE proposal had been updated four times and the most recent version of 23 October was made available to councillors and the public on 26 October which created further confusion.

“The updated proposal is still seriously flawed and we had two days to digest what was planned and make submissions,” he said.

Mr Gregory’s parents Jill and Richard live near the proposed site, and in their submission to Council they noted that it fails to reflect the community’s genuine concerns.

They say the proposal has not offered solutions to traffic concerns in the Majara and Gibraltar Street precinct, along with adjoining streets. They also say the disruption and fumes from the railway traffic (behind the proposed site) may have serious consequences for students, while consultation with the community was labelled as a “marketing exercise”.

“Council is in danger of finding itself with no alternative but to agree to this deeply flawed and incredibly divisive plan imposed upon it as a political stunt by Mr Barilaro, Ms Mitchell (NSW Minister for Education) and her Department,” the Gregorys said in their submission.

The Department of Education said it conducted a community engagement survey where more than 700 responses from a four-day community information hub found an overwhelmingly positive sentiment to build the new high school in Bungendore.

A Department of Education spokesperson told Region Media the department spent 12 months considering more than 1000 hectares of land in and around Bungendore.

“A number of sites were considered and assessed based on its suitability to support the needs of the project. This included the availability of services such as sewerage, electricity, and roads, the accessibility of the site and environmental constraints such as bushfire, ecological impacts and flooding. Following the due diligence process, the Majara/Gibraltar Streets precinct was identified as the most suitable location,” the spokesperson said.

However, Bungendore Park Action Group’s Judith Turley, who is also a former Palerang Shire councillor, said while they do not object to the need for a high school, the secrecy surrounding the proposal has made it hard for a section of the community to have its voice heard.

“The voices and the views of our community, some of whom have put in the hard yards for Bungendore for many decades, are horrified by this plan which encroaches on one of the town’s most historic precincts, which have failed to be heritage-listed,” Ms Turley said.

“We just feel like this plan doesn’t take any of that heritage into consideration and we feel that is very disrespectful, especially when other sites for the school were proposed.”

The project, costing in excess of $10 million, will see more than 400 children in classrooms for the beginning of term one in 2023 and will eventually accommodate more than 600 students.

It is expected the first sod will be turned before the end of this year.

Great article, thanks Michael. It might also be worth mentioning that we finally learned of two sites on the edge of town which were also considered. The reasons the Department of Education claimed they were unsuitable were that:

– it was not currently zoned for schools (newsflash – Bungendore Park isn’t either);

– it lacked road access (I guess the adjoining highway and the other roads into town and out to the local area didn’t count as proper road?);

– it had poor pedestrian and cycle access (so the adjacent cycle path running right through town – and joining it to the primary school was a mirage?); and

– it lacked services (maybe the large housing development adjoining the site had no water, sewerage and electricity?).

You couldn’t make some of this up! If that’s the standard of their decision making, we can have no confidence that their “assessment” of 1,000ha was done in a remotely competent manner.