Bushrangers and bushfire: the story of a Eurobodalla town’s monument to police bravery 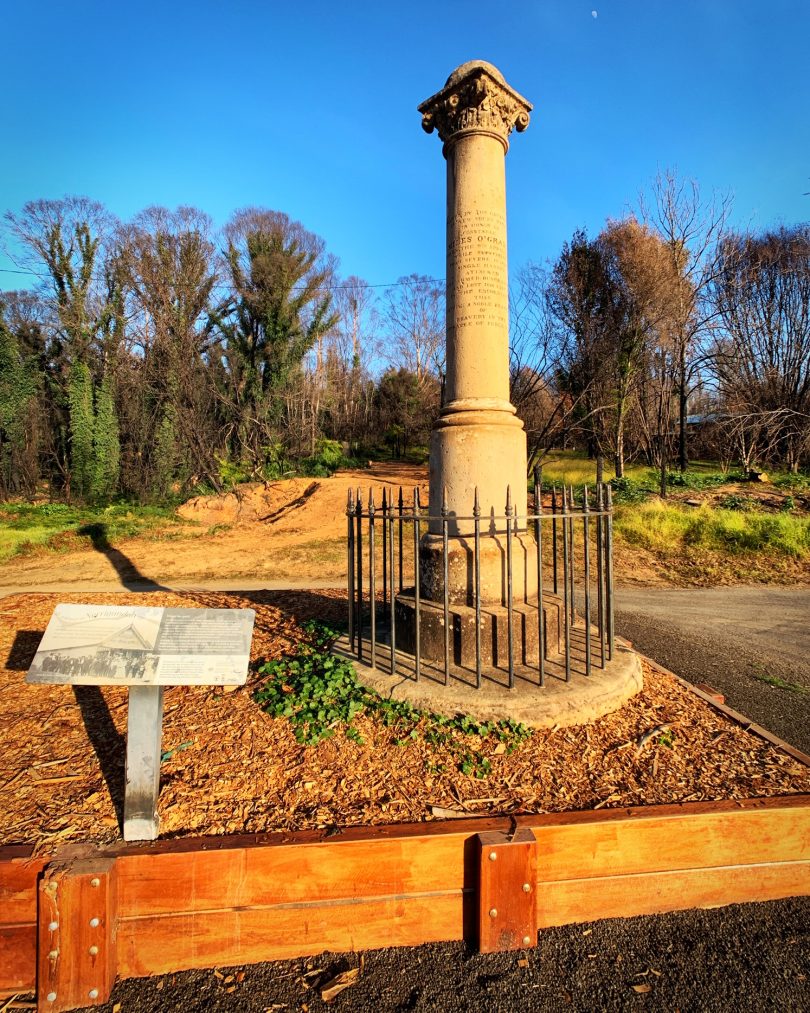 A four-metre-high sandstone pillar at the heart of a small village in the Eurobodalla Shire will be among the first structures to be restored following the summer’s bushfires.

“It seemed one small thing we could do to lift spirits in a pretty horrible environment,” South Coast Police District Superintendent Greg Moore says.

“The monument holds a pretty sentimental place in their hearts.”

The O’Grady Monument stands in the middle of the main road of Nerrigundah. It was built over 150 years ago in honour of Constable Miles O’Grady, and its story proves this isn’t the first time this place has been devastated or that emergency services have stepped in to prevent even worse.

In 1866, Nerrigundah was bustling with gold-rush hype. The town had three policemen, but on Monday, 9 April, Sergeant Hitch was away, Constable Smyth was overseeing the barracks, and Constable O’Grady was in bed with a fever. Unbeknownst to them, the nearby Clarke Gang were plotting.

Ever since the Hall Gang had taken over Bathurst, taking over a town had become something of a badge of honour in the bushranger’s world. Brothers Thomas and John Clarke and their accomplices had Nerrigundah in their sights.

That evening, five of them crashed Wallis’s London Tavern, robbing passers-by before locking up as many locals as they could find inside. Constables Smyth and O’Grady soon caught wind of this, and despite being begged not to go, O’Grady replied, “I will do my duty”.

The two of them headed for the tavern.

A shoot-out ensued, during which O’Grady fatally wounded one of the gang members before the oldest Clarke brother allegedly fired back. The constable made it to another nearby hotel where he died three hours later.

The Clarke Gang went on to haunt an area stretching from Braidwood to Bega, Moruya to Nelligen for another year before the brothers finally surrendered and were hanged in 1867. But Nerrigundah never became that other Bathurst.

In honour of his valiant efforts, the NSW Government sent money to O’Grady’s family in Ireland and erected a memorial on the site in Nerrigundah where he was shot. There it stood for decades, gradually falling into disrepair.

In 2016, Eurobodalla Shire Council maintenance coordinator, Andrew Gillies, noticed the stone pillar sitting atop a mound of dirt in the middle of the street, and went to take a closer look.

“I’d driven past it 100 times but never really stopped to read what it was all about. One day I stopped and read it, and did some research. It needed some love.”

So 150 years later, the O’Grady Monument was returned to its former glory. However, a massive bushfire was only a few short years away, one which was to not only scar the monument, but also destroy 20 of the village’s 25 homes and claim the life of a 71-year-old man.

It was the same horrible experience shared across the Eurobodalla Shire and beyond over Christmas and the New Year – “a roaring, deafening sound with a red glow”, unlike anything most firefighters had ever seen.

Fire captain Ron Threlfall took charge and huddled 12 of the residents within the fire station shed, where they waited out the storm.

“This door pushed in and the crew had to push up against it to stop the door caving in,” he said.

“We had sparks flying in here and smoke everywhere.”

Nerrigundah had no power for almost two weeks afterwards and lived off donated water, food, clothing and fuel. But they were quick to get up and dust themselves off.

“We’re going to get a big skip in to clean up the area and start rebuilding,” a resident said at the time.

Come June and recovery is well and truly underway. Near the top of the to-do list is the O’Grady Monument.

The Council’s director of infrastructure, Warren Sharpe, says this is to support the local community and thank the police for their effort during the bushfire crisis.

As the monument’s plaque itself reads, “thus setting a noble example of bravery in the discharge of public duty”.

An inspiring story of little known local history. I think one of the gang members was imprisoned within a tree at Nelligan while on the way to trial.

Stephen Murray - 1 minute ago
I remember the punt that the bridge replaced. View
Christopher Cuba Rabanal - 2 hours ago
I’ve heard the best fish and chips in the bay is closing due to the lockdowns. That’s pretty sad 😢 View
Geoff White - 2 hours ago
Adam Beams I’d give it a good crack lol... View
News 65

Patrick Robertson - 2 hours ago
Give it some mince to eat. View
Mick Bailey - 3 hours ago
Q. Has he done something to the bird to cause it to "single" him out? Respect their intelligence. View
News 249

Nick Swain - 4 hours ago
Griffin had a coherent public transport system based on rail including a track from QBN, through Civic and on to Yass. What a... View
Mike Holland - 5 hours ago
I love trains, and the idea of a high-speed train is very enticing, but I'd probably only use it once or twice for the novelt... View
Pat Gagel - 5 hours ago
I have telecommuted on the trains since graduating in 1992 on and off. I used to get strange looks when I worked away on my V... View
Opinion 51

Capital Retro - 5 hours ago
She sold me a pair of shoes from her Fyshwick shoe store in 1983. I still wear them but I think she outlast me. View
Frank Koch - 7 hours ago
Margaret Freemantle no I don’t but I know of her and she has done well so we shouldn’t begrudge her in any way. Most peop... View
Courts & Crime 1

Leonard - 5 hours ago
No mention in this article of where she stands on the Holden/Ford debate. View
show more show less
*Results are based on activity within last 7 days

UPDATED 3 pm: Chief Minister Andrew Barr has moved to quell concerns from the ACT's business community regarding a potential...

@The_RiotACT @The_RiotACT
After last fortnight's Chinese #food triumph, David Murtagh thought he'd take a punt on #Turkish. It was a hit - if only he could locate the missing cutlet https://t.co/YH3WSOOk2p (1 hour ago)

@The_RiotACT @The_RiotACT
A major apartment complex is planned for the former Italian Club site in Forrest but first, the land will need to be rezoned https://t.co/Qo0qxhm2yQ (3 hours ago)

@The_RiotACT @The_RiotACT
Families staying at @RMHCanberra had a sweet surprise when @KokoBlackAust Canberra and My Sweet Lady donated hampers of chocolate and cupcakes https://t.co/Wq9JvHQ4vV (4 hours ago)