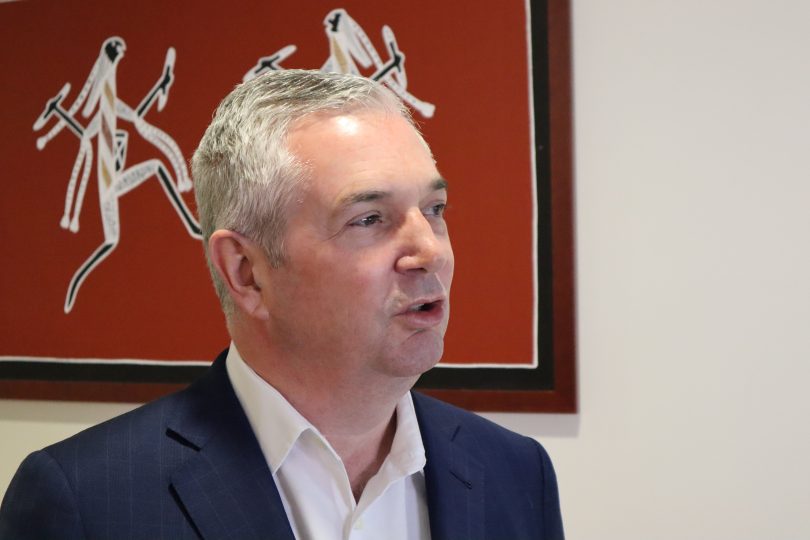 Too many Canberra businesses are failing and there is a lack of specific information why, according to the Canberra Business Chamber.

It is calling on the ACT Government to fund new research that would provide a clearer picture of Canberra’s business environment and what policies might stem the high rate of business closures and maintain jobs and economic growth.

Chamber CEO Graham Catt says the lack of clear data was hampering the ACT’s economic recovery from the pandemic, but more specific information would aid the government in achieving its avowed goal of creating 250,000 jobs by 2025.

He says it would also feed into a long-term strategic plan, including skills development, to grow the private sector in the ACT.

Even before the pandemic, the rate of business failures was high, with the ACT having the lowest long-term business survival rate in the country.

Within five years, only 62.5 per cent of ACT start-ups are still trading, compared with a national average of 65.1 per cent, according to the chamber.

“If you look at the business make-up in the ACT, the vast majority are small and micro, so having a clear data set that’s specific to them will help government make policy decisions and look at things that might be impacting that high rate of closures, and barriers to businesses growing and scaling and being able to employ more people,” Mr Catt says.

In its 2021-22 ACT Budget Submission, the Chamber has called on Chief Minister Andrew Barr to allocate funding for a regular survey of the local business community and economic conditions, similar to the work done in the UK by the Open University.

Mr Catt says The Quarterly Survey of Small Business in Britain tracks the key drivers of change for small to medium-sized businesses, providing critical data on which policymakers, support providers and the business community could act and plan for the future.

He says the government needs to know what the business sector looks like to generate those 250,000 jobs.

“Are we trying to grow particular sectors, new businesses in those sectors, and work with them so they can scale to employ more people?” Mr Catt asks.

“Having that kind of clear strategy … will give focus for the private sector and the government, and be able to track our progress as we work towards that jobs target and business target.”

READ ALSO: Canberra’s chances of getting a team in the A-League are better than ever

Mr Catt says business wants to partner with government and the education sector on a road map to evaluate progress towards the goals they had set.

The Chamber is also calling for a skills and workforce plan as businesses grapple with labour and skills shortages, particularly in the digital area.

Mr Catt says not being able to find people to meet the demand for goods and services was the biggest handbrake on business growth.

He says having a plan will guide universities and CIT about the type of graduates industry needs, fast track training and assist government in promoting the capital region as ACT an employment centre.

“Certainly there is a role for the ACT Government in how we look at attracting people to move to Canberra. How do we market Canberra as an employment destination, particularly in the private sector?”

The Chamber has also called for less red tape and the continued funding of the better regulation task force, support for export-oriented business and markets, ensuring local industry benefits from infrastructure projects, and extending zero-interest loans for solar panels and zero-emission vehicles for small business.

The government will hand down the second of its two budgets this year in August.

Once business welfare starts the government has to pick winners. Very dangerous.

Most of the start up support tends to be geared to that in the technology space or things with end consumer appeal. Most innovations and new businsesses hit a specific niche and that is harder to identify support for.

Rent, rates, stamp duty, taxes, work cover compliance ect and every thing else the act gov stings you! just so you can open the doors!

Another stunning achievement for the incompetent Greens/Labor ACT government. Along with the highest rates increases, the longest hospital waiting times, the least affordable housing, the ACT has, …………drum roll……….”the lowest long-term business survival rate in the country”.

Practical suggestions from the Canberra Business Chamber for data collection, skills development, training, jobs targets and less regulation will be ignored because here In_the_Taratory we have, or will have, or maybe won’t have lots of ChooseCBR vouchers instead. Thanks to our Minister for Business Failures and More Regulation, the major single beneficiary of the ChooseCBR Vouchers will be Amazon Web Services.

But we have a tram, a rainbow roundabout and our teachers are the highest paid in Australia.

Valerie Foster - 3 hours ago
Not everything new is good. View
News 134

Brianna - 6 hours ago
Spiral, they selfishly put their customs, wants and needs ahead of everyone else. It looks like some of these people might be... View
rationalobserver - 17 hours ago
The Government (PM&C - statistical value of a life) has a number for that. Once the combined costs (economic, social and envi... View
rationalobserver - 17 hours ago
Actually, the data shows that the only domestic violence related increase we have seen was the noise from DV advocacy groups... View
Public Sector 16

Robyn Holder - 6 hours ago
When men stop wearing their ridiculous old fashioned suits and ties because they have no imagination the they can discuss it.... View
Angela Hunter - 18 hours ago
Could someone please tell the dept of Home Affairs that it's almost almost 2022. Next they'll be bringing back tea ladies and... View
Community 15

HiddenDragon - 8 hours ago
On the day it was announced, the jump in the ACT unemployment rate was being spun in the local media (presumably at the promp... View
News 22

brianf - 11 hours ago
All politicians, their staff and lobbyists should have been required to get tested and isolate for a fortnight before travell... View
Food & Wine 12

Jude Lou - 17 hours ago
Are there at least 10 layers? Wowww View
show more show less
*Results are based on activity within last 7 days

@The_RiotACT @The_RiotACT
Punk rock, high energy jams and Sunday sessions - there's something for everyone this week. As usual - check with venues before you head out https://t.co/Fyusza28xQ #gigguide (4 hours ago)

@The_RiotACT @The_RiotACT
The @NatGalleryAus has recently revamped its Art Cases touring exhibition with new themes and new objects. Find out how you can bring this hands-own experience in contemporary art to your school or community.https://t.co/ksjuEaNhYv (5 hours ago)

@The_RiotACT @The_RiotACT
Cup and Coaster in Fyshwick feels like coming home - and with an exciting menu that changes every two months, there are plenty of reasons to become a regular, as Michelle Taylor discovered https://t.co/97JbTzoSm2 (6 hours ago)