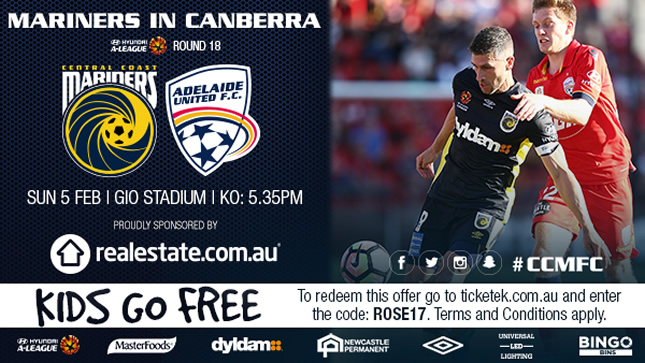 After drawing a record crowd last November, soccer fans across the capital have another chance to prove their devotion to the sport with another A-League match at GIO Stadium on Sunday 5th February.

It is the second and last local A-League game of the season, and will be the last one forever unless Canberrans vote with their feet and head to the game.

With the W-League semi-final between Canberra United and Melbourne City kicking off at the ground at 8pm, it will be an evening of elite football action in the capital (the United game was originally scheduled for 2pm but has been moved due to the heat). The high profile women’s teams will be vying for a spot in the national league grand final but only one team has the home ground advantage.

After seven straight years of no A-League matches, the ACT Government and Capital Football struck a deal with the Central (aka Capital) Coast Mariners to bring football back to the ACT with two home matches this season. If the games prove successful, it paves the way for A-League to make a permanent return to Canberra.

With a strong belief that Canberrans will come through for the team and sport as a whole, Ivan Slavich, Business Development Ambassador for the Central Coast Mariners says, “Please – show your commitment by coming on February 5. If you do, A-League can return next season.

“The GWS Giants draw a crowd of over 10,000. With soccer being the number one organised participation sport in Canberra, I’m confident we can top that.”

This second game has the Central Coast Mariners taking on Adelaide United (who won the comp last year). They’re pretty evenly placed so it should be a competitive, high-scoring game.

“We had a record crowd at the last game,” says Ivan. “We broke records. But I want to break them again. I know we can do better.”

In an effort to support parents in bringing their soccer-loving children, adults will receive four free junior tickets for every one adult ticket purchased.

“Kids love the sport and they absolutely love watching elite teams play, so we want to support parents in making that happen. We’ve also had a high take-up of corporate boxes from an array of esteemed local organisations.”

Those wishing to enquire about corporate boxes can call Ivan on 0414 514 555 or email islavich@ccmariners.com.au.

Central Coast Mariners will play Adelaide United on Sunday 5th February at GIO Stadium at 5pm. Tickets are from $15.00 and are available through Ticketek or at the gate.

Some insight into this issue here: http://www.theroar.com.au/2016/11/11/mariners-playing-canberra-waste-time/

Some of the comments are worth noting.

It appears that the ACT government are paying FFA several hundred thousand dollars for the right to stage these matches in Canberra for the Gosford based team and according to today’s Canberra Times the gate proceeds from the coming match all go to the Mariners.

What economic benefit does this bring to Canberra? The people of Gosford must be laughing all the way to the bank.

This includes the proceeds that would normally go to the Canberra United women’s team who are now competition premiers (well done ladies).

The attendance figures will include the Canberra United supporters too.

Canberra United are not happy as the FFA has forced them to play away from Mackellar which was to be a hard earned home ground advantage in the first semi-final.

We should be supporting the interests of our own Canberra United team instead of blow-ins from out of town.

It’s a bad time to have a soccer match in Canberra,

A lot of people will still be on holidays and those who are just returning will be skint.

I can’t see more than 5,000 turning up for this event – neither of the teams have any connection with Canberra and they are not at the top of the table either.

I have to applaud Ivan’s enthusiasm for the game but an A league team for Canberra is never going to happen.

I would go but ppl seem to hate it when I applaud the refs and heckle the players, instead of the other way around. Former football (soccer) ref of 7yrs standing, what else am I going to do? ROFL

Come on Canberra, there’s nearly 400,000 of us and we can’t even fill a 20,000 cap. stadium unless a team we’ve had for 20 years makes it to the finals (NRL)!! What exactly are we doing on Sundays anyway? Going to Westfield to buy more c$&p we don’t need?! Watching Better Homes and Gardens? Wasting 30L of fuel driving to the coast and back? If you’ll watch the World Cup on TV, get behind an A-League club for Canberra!

Must be a typo somewhere because Ticketek prices start from $25.40 plus the $5.50 service fee regardless where you purchase it. Kids are free though.

Natasha Van Oudheusden - 1 minute ago
Matthew Johnson in that case, yes. I must admit I only quickly scanned through it while waiting for a spreadsheet to update f... View
Matthew Johnson - 12 minutes ago
Natasha Van Oudheusden i think we read into this article differently. The way i’m reading it, if the landlord breaks the re... View
Robyn Baer - 26 minutes ago
Hopefully the wording is written better than their previous amendments. View
Community 14

Jasmine Hawker - 5 minutes ago
Scotty Jeffery Why are we prioritising where the help goes? Yes Canberran homeless people should be getting support but why w... View
Graham Cox - 22 minutes ago
How are we taking these people in when we barely have housing for our current population? Why are non Australians given prior... View
Debora Gyllien - 55 minutes ago
and yet some of us who have been living here for decades and searching for support have found none. View
Property 7

Nestled among picturesque gardens, this stone and timber cottage could have been lifted straight from the pages of a children's storybook....
Opinion 29

@The_RiotACT @The_RiotACT
Barb Shannon, from #Bookham, near Yass, may have made hundreds of unique, embroidered heirloom #blankets during the past 50 years, but each one is #special to her and she hopes they will all be loved for life https://t.co/9rxXUtE0yH (34 minutes ago)