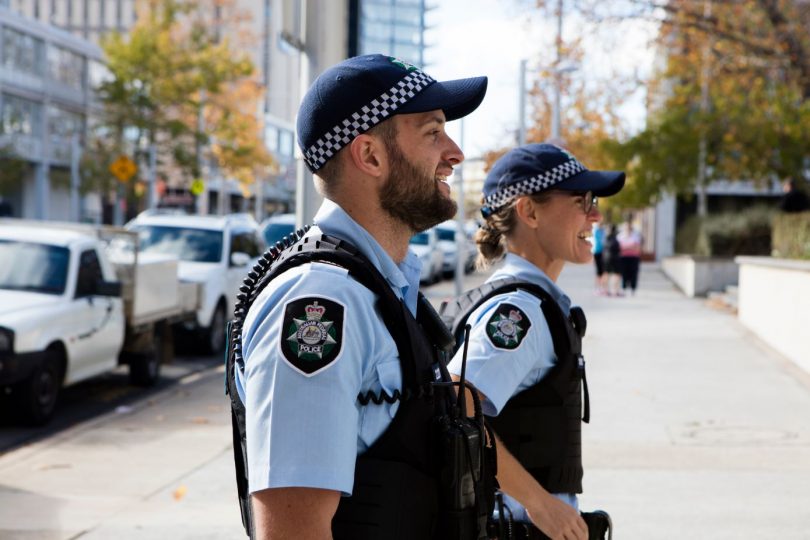 ACT Policing has 35 fewer sworn officers in Canberra than there was five years ago. Photo: Supplied by ACT Policing.

Canberra has the lowest police-to-resident numbers per capita in the nation as the number of sworn officers within ACT Policing continue to plummet and the calls grow louder for the ACT Government to increase its funding.

ACT Minister for Police and Emergency Services Mick Gentleman said the government was investing in ACT Policing even though there were fewer officers on the ground.

“We have been investing into different components of ACT Policing, not just numbers on the ground but more importantly with people who can assist ACT Policing in reducing crime,” Mr Gentleman said.

“Our forensic accountants, for example, who have been a big investment over the recent years, to ensure they can deal with the criminal aspects of outlaw motorcycle gang activity. It is working because we have seen a trend in reduction of crime so I am very pleased with the work of ACT Policing.

“There will always be a call for more policing and I will be going to the budget cabinet with those requests. There will be more resources needed and I will be talking to CPO Ray Johnson about what he needs in the future.”

The Canberra community continues to grow while ACT Policing numbers continue to be cut, which is a grave concern for Liberal Member for Murrumbidgee Gulia Jones.

Ms Jones said Labor’s cuts to Canberra’s police force is hurting the community and reiterated the need for a strong police force to help keep the ACT safe.

“ACT Labor’s gradual starvation of our police force and cuts to frontline officers has made our community vulnerable and a haven for criminal elements,” Ms Jones said. “I want to pay honour to the men and women who work long hours to keep our city safe despite the lack of support they receive from the current government.” 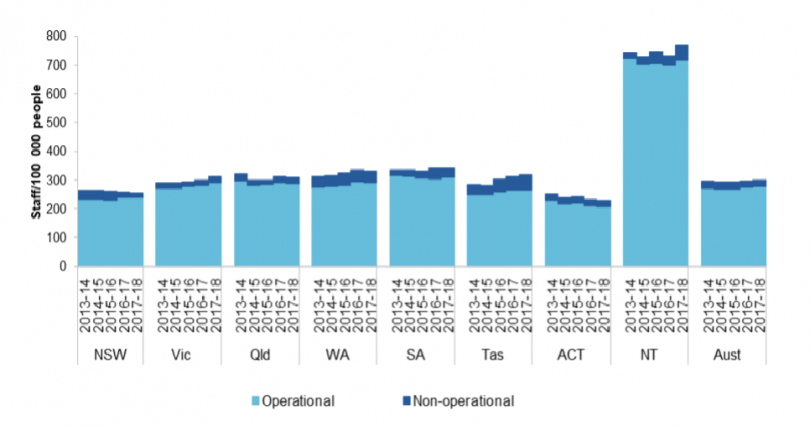 Australian Federal Police Association (AFPA) president Angela Smith said it was clear there had been a lack of government investment in ACT Policing.

“While numbers are declining, the ACT population is increasing,” Angela Smith said. “ACT Policing is getting smaller and smaller which is frightening.

“It upsets me when governments use the excuse that crime rates are reducing so they are not investing in police. Police are doing everything they can to stay on top of crime but they have fewer numbers. How can you keep the community safe with fewer numbers?

“It is something the ACT Government needs to wake up to and to have a think about.”

But we have a Human Rights Commission. I don’t know about you, but I sleep safe in bed knowing it protects us.

We certainly need them! They do such absolutely essential services for the safety and orderliness of all of us!!

Hence the most liberal and forward looking city in Australia.

The same report shows the ACT has the second highest rate of Armed robbery in the country and is the worst State or Territory on a number of other crime and policing measures.

What’s worse is Federal police members in Tuggeranong are also complaining about a lack of personnel and resources to properly provide effective policing. The police minister keeps mentioning how safe Canberra is, but try telling that to the residents living near bikies or working in Outer suburban shops suffering multiple armed robberies a year.

You just need to visit orcdrive through other towns and cities to see they have a higher Police presence and numbers.

“Cant afford coppers and a tram.”

They will need 20 “transport police” to control the fare evaders on the tram. It happens everywhere else.

Cant afford coppers and a tram.

How does the crime rate compare?

So they call to supplement their numbers with volunteers!

You can tell, no patrols and just lack of interest in Burglary etc. I am surprised its not worse.

Monica Tiffen - 19 minutes ago
They are so lovely, Butsome really worry me Swaying in the wind over Homes! View
Rowena May - 24 minutes ago
and when people express their concerns the govt says no you can’t cut them down….. but hmmm the Northbourne Ave ones were... View
Greg Myat - 37 minutes ago
Still it would be a shame to cut everything down due to a once in how many years event. View
Community 47

Peter Miller - 32 minutes ago
Peter Rudd agree agree agree. The govt needs to review street tree policy urgently.... gums are not a good choice. View
Zoe Lewer - 10 hours ago
Bob Foster yep. Us humans sure have made an impact. We are the problem. You are right. The day the people who were invaded ch... View
Joy Gosden - 10 hours ago
Yes. What were they thinking planting them in our suburbs. They drop limbs attract pests and stop grass growing around them.... View
News 319

Sam Oak - 7 hours ago
Don't know why they are complaining when they got their property at a discount due to its proximity to the sludge pit. This i... View
JC - 7 hours ago
Seeing as the pit (which is part of a stormwater pollutant trap) predates the first houses in the suburb by about 20 years I... View
Capital Retro - 12 hours ago
Good luck with that. I suggest you read up on "social disamenity" from waste odour and commence a class action against the AC... View
Sport 1