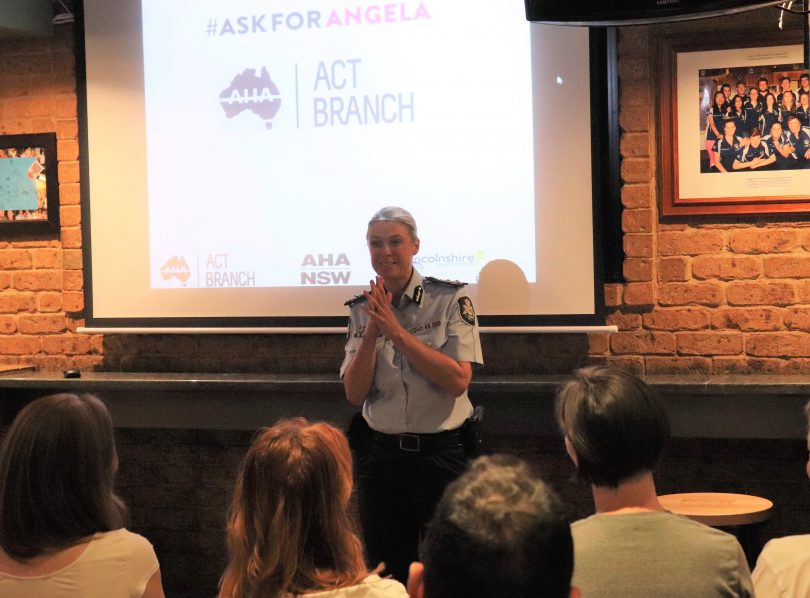 Around 70 licensed venues in Civic and Braddon will be the first to take on a campaign where patrons who feel threatened by sexual violence can get help by using the phrase ‘Ask for Angela’.

The ACT branch of the Australian Hotels Association, in partnership with the ACT Government and supported by ACT Policing, launched the Ask for Angela campaign at Mooseheads in Civic on Monday (9 December).

The campaign encourages patrons who feel uncomfortable or unsafe in licensed premises to discreetly ask staff for help by ‘Asking for Angela’ – a phrase aimed at alerting staff so they can diffuse the situation by discreetly escorting that patron to safety.

The Australian Hotels Association (ACT Branch) general manager, Anthony Brierley, said the Ask for Angela campaign will ensure safer nights out for everyone, particularly as we enter the busy summer period.

“This campaign demonstrates the licensed hospitality industry’s commitment to the safety of our patrons,” said Mr Brierley.

“It is an example of the relevance of the AHA in responsibly engaging with regulators to create a positive social policy outcome for the Canberra community, and for licensed hospitality venues. The AHA is pleased to be coordinating such a worthwhile campaign.”

The campaign originated in the United Kingdom and has proven to be a successful intervention for reducing sexual violence within the community, particularly on a social-media arranged first date or night out.

Hospitality staff from venues in Civic and Braddon were briefed on the campaign by the Australian Hotels Association’s ACT Director of Liquor and Policing, John Green.

“We are in the process of educating venue staff about how to enact the code-word concept and how to facilitate the safety measures within their own environments,” Mr Green said.

“If a patron feels uncomfortable, unsafe, or if an encounter starts to take on a darker tone, this campaign allows that person to approach venue staff and ask for Angela.”

Mr Green said the campaign is not about venue staff replacing the role of police or putting themselves at risk.

“This is about reinforcing the need to be aware of patron behaviour, and provide options when a date or night out doesn’t go as planned,” he said.

Mr Brierley said the campaign encourages people to look out for each other.

“The program is industry-led, it’s pro-active and it’s like a Neighbourhood Watch thing where it gives a name to what people are doing already. Ask for Angela does that for the prevention of sexual violence,” he said.

“It’s a code-word campaign to reassure the community that should they ever feel unsafe, or if a first date takes a bad turn or the person is not who he or she said they were online, then the staff of the licensed venue are there to help them in a discrete way.

“If things get worse, the police remain only one call away.”

Mr Brierley said the plan is to roll out the program to all 700 licensed premises in Canberra. Training is provided, along with tips for hospitality staff to handle certain situations when a patron asks for Angela.

“Once we get a few key learnings from the initial program, it is definitely our intention to roll it out across all the venues in Canberra.”

Mooseheads in Civic is among the first venues to roll out the campaign where patrons who feel threatened can ‘Ask for Angela’.

William Coats - 41 minutes ago
The land tax was to stop people “land banking” houses should be used as homes not stagnant investments View
Lea Powell - 6 hours ago
William Coats it takes time to change policy directions. It’s not as simple as a click of the fingers. View
Lea Powell - 6 hours ago
Kerry-anne Stafford appeal the decision. Why have they revoked it. Don’t take that lying down. View
News 5

@The_RiotACT @The_RiotACT
Did you know that it takes an average Australian 10 years to do something about their hearing loss once they realise they're affected by it? https://t.co/E4x3cUjwVr (26 minutes ago)