The recent Commonwealth heritage listing of Lake Burley Griffin will not automatically sink proposals for seaplane services operating on its waters.

National Capital Authority Chief Executive Sally Barnes said the heritage listing requirements would have to be taken into account before licences were granted but implied that seaplanes could still operate within that heritage framework.

Ms Barnes said Canberrans should know by the fourth quarter of 2022 if seaplanes would become part of the lake scene when a three-pronged piece of work was expected to be finalised, including licences.

Last December, the NCA backed the idea of seaplane services on the lake after consulting the community despite about three-quarters of submissions, mainly lake users, opposing the proposal.

The NCA acknowledged their concerns and hired a consultant to provide lake user guidelines so groups such as the Yacht Club and rowing clubs could safely share the waters with seaplanes.

“Both seaplane operators are coming to Canberra in the next month to have a look at the various jetties and talk to us about exactly what’s required to dock a seaplane,” she said.

But the licence conditions will be where the heritage requirements come into play.

“And the third one is to get the licence right and the licence will be where we’re looking at the impact assessments and finalise how we protect those heritage values in the Commonwealth listing,” Ms Barnes said.

That will include values such as the vistas and views, the environment, including threatened species, and the quiet and peace of the lake. 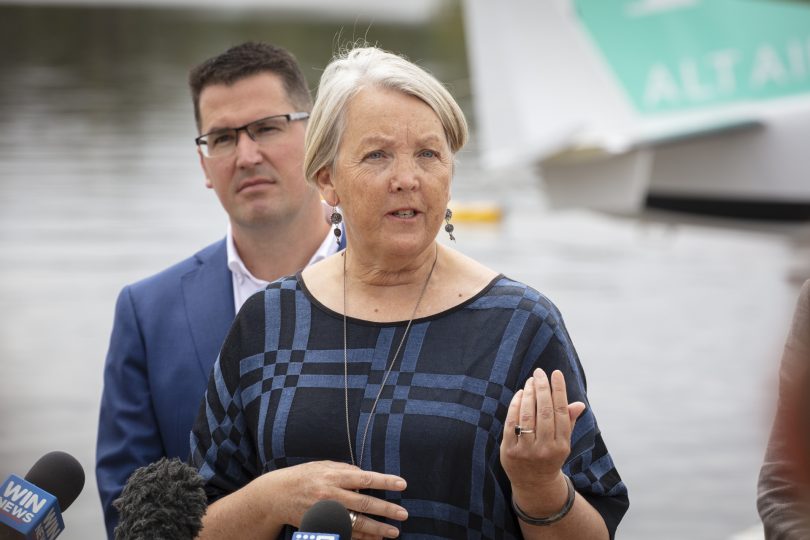 Ms Barnes said the NCA would have to make a judgment about what is “quiet”, whether the impacts would be significant and if they could be managed.

Sydney Seaplanes has proposed four daily services between Rose Bay and Canberra, two of which would land on and take off from the lake, tying up at the dock near the National Museum of Australia.

Last year’s test flight involved a 12-sear Cessna Caravan, but the company intends to use the bigger two-engine amphibious Twin Otter that can carry a maximum of 14 passengers. The company says it plans to convert to electric seaplanes by 2025, which could allay some of the environmental and noise concerns.

The NCA said last year that seaplane operations would enrich the appreciation of Canberra as the national capital and contribute to a diversification of the local economy, but further work was required to address the concerns of existing lake users.

“The NCA is of the view that the potential impacts of seaplane operations on Lake Burley Griffin can be appropriately managed and that there are significant benefits in creating a unique travel tourism link to the nation’s capital,” the NCA said.

and hangers on will bask in the glory of the progress brought to the ACT. We might have to remove a few thousand trees in the process, maybe even redefine the former lakeshore, convinced that if only Walter BG had foreseen these opportunities, this is what he would really have included in his plan. Cos we’re told now that Walter really wanted West basin filled in a bit here and there didn’t he? If only Walter were alive today to see the amazing changes that NCA is making to his unique vision

You do know his origina plan was for a circle in the West Basin? Or did that escape you…. NCA are actually fulfilling his initial vision…. https://www.google.com.au/imgres?imgurl=http%3A%2F%2Finsidestory.org.au%2Fwp-content%2Fuploads%2Fcanberra_main.jpg&imgrefurl=https%3A%2F%2Finsidestory.org.au%2Fa-city-in-search-of-its-centre%2F&tbnid=fILT4e_tgVLA3M&vet=12ahUKEwjA-eS6oJD4AhVNgGMGHW-yAfoQMygBegUIARC9AQ..i&docid=iI9vRR7zn3tnQM&w=1062&h=708&q=walter%20burley%20griffin%20canberra%20lake%20plan&ved=2ahUKEwjA-eS6oJD4AhVNgGMGHW-yAfoQMygBegUIARC9AQ

You do know his original plan was for a circle in the West Basin? Or did that escape you…. NCA are actually fulfilling his initial vision…. just google images of initial drawings…

Hey why not partially drain the lake altogether, terraform it to enable both float planes and regular international commercial jets to land on it too. NCA could then rezone the the remaining (now dry) parts of the former lake bed for more apartment blocks each sided of the runways.

Just think it would satisfy all those people who think Canberra is short of tourist attractions, Well connected developers will be over the moon and so too all those ACT Polititicans, various Buraeucrats and hangers on with

Was not supportive of the seaplanes because of the environmental impact of the av gas fuel they use. Day trips are not a great reason to trash the environment further. Good to see an electric sea plane is planned- how about changing the conracts so that ONLY e-planes can be used- that would be much more acceptable and would act as an incentive to interested companies to switch.

The are gas turbine powered – they don’t use avgas.

In fact they use the same fuel as all intercontinental passenger jets use which contributes about 8% of global greenhouse gas emissions. The same fuel that is used by all the private jets that have flown into Davos delivering the people who created our “zero emissions” demands.

As for “e-seaplanes”, you are dreaming.

Fantastic idea, Australia needs a good network of seaplane bases around the country, great for tourism. Travelling by floatplane is a great way to get around.

Yet more loss of community facility (it will land on area used for yachting, rowing, etc) for private profits.

Colin Vivian there is minimal loss to the public. Two landings a day on the lake that take 30-60 minutes. I mean everytime i’m near the lake its woefully underused.

If NPA can wave through Biggles and his seaplane, does that also signal the end of the Ben Morton era of being precious about the light rail approvals?

Guess we can have speed boats and jet skis as well then. Blue green algae forms in still water so lets shake it up. (pun intended)

First things first, who asked for this?

That would be great, I mean Canberra is the most boring city in Australia, could give the dump a lift.

Mark N Mel sorry but if Canberra is THE “most boring city in Australia” – you can always relocate, right?

Nada Krstin I did 8 years ago to country NSW.

No this should not be allowed

John Harris why not?

This will destroy lake

Darcy Ryan as soon as I hear trust me bro, you got no argument

Dan Coleford You can’t land a plane when you have power boats racing .

Paul Radford that was my whole point to the comments above.

There might be some interest in joy flights, but not sure that flights between Lake BG and Rose Bay, Sydney are going to be commercially viable – especially as Rex have just pulled out of the Canberra-Sydney run because of non-viability.

Will be great to see them finally come to Canberra……….