A Canberra tech firm has won a $1 million Commonwealth grant to apply its artificial intelligence product to help protect Australia from biosecurity threats at the point of entry on the nation’s docks.

Deakin-based Trellis Data is one of six businesses granted $1 million each under the Business Research and Innovation Initiative (BRII) to develop their solutions.

Trellis’s AI product will protect Australia’s agriculture and unique native flora and fauna from pests, diseases and contaminants that arrive on shipping containers, assisting a variety of detection technologies, including microwave and infrared, to identify potential threats in real-time.

Key Accounts Director Charles Black says a high-image camera attached to a crane will take photos of the containers as they are offloaded and Trellis’s product will read the images and alert Customs to any known or unknown ‘hitchhikers’ such as bugs, soil or slugs.

“What is different is that we can do it in real-time and remotely as it’s occurring,” Mr Black said. “It’s a fundamental breakthrough in terms of technology.”

The grant will allow the product to be deployed and prove its capability, with the potential for Trellis to take a slice of the huge global biosecurity market.

Mr Black said that over the next decade, biosecurity risks in Australia were going to rise considerably as trade volumes and container arrivals are expected to double by 2025, posing serious threats to Australia’s economy. 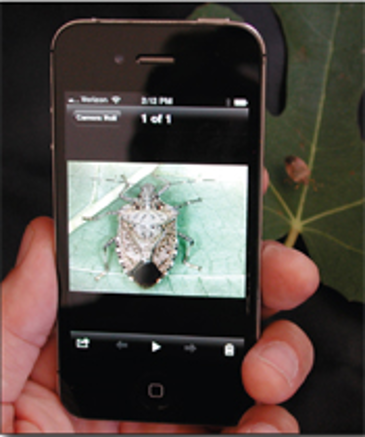 A device showing a bug identified by Trellis’s AI product.

Biosecurity risks are also a problem for other countries trying to sell their products into Australia.

“Part of the grant also looks at commercialisation of the product, and that’s a reflection of the government’s desire to assist other countries to better manage their biosecurity posture,” Mr Black said.

“The last thing that other countries want to do is have pests on their containers coming into Australia because that obviously slows down their ability to sell their products. There is a real financial benefit for them to improve their capability.”

Trellis’s machine learning platform interprets and provides intelligence on all kinds of data, including databases, emails, documents, websites, news feeds and even phone calls, and comes up with solutions to complex problems across a range of sectors, particularly with government.

Mr Black said what sets Trellis apart from other AI firms is its world-first real-time explainer tool which is able to explain why the AI machine has made its decision.

“This is fundamental to getting more trust in AI solutions,” Mr Black said.

He said that in an insecure world, it was important that Trellis was a wholly owned Australian company and 100 per cent sovereign asset.

“There are lots of machine learning AI firms but it’s increasingly important for Australia to have its own capability in this space and not rely on other countries, as friendly as they may be,” he said.

Trellis was established in 2016 and now has 10 staff, and is working with government agencies and private sector firms across Australia.

Marc Blackmore - 2 minutes ago
Assid Uous if you think the issue can be solved with out increasing supply good luck 🤷‍♂️.... View
Assid Uous - 55 minutes ago
Marc Blackmore While supply is certainly one of the key considerations, suggesting it is the only lever or factor at play her... View
assiduous - 1 hour ago
Are you trying to imply the ACT government has no control over the rate of land release and social housing stock by character... View
Sport 9

enjayjay - 8 minutes ago
Have you been there? Its would have more participation than ANY other sport in the ACT - every single day - not just weekends... View
enjayjay - 21 minutes ago
Have you even been there? Thousands of people use it every day. It draws people from all over australia and contributes milli... View
fridgemagnet - 36 minutes ago
"these people" are anyone in the community. It is a mixed use recreation venue, runners, walkers, horse riders, road and moun... View
News 245

willondah - 4 hours ago
Totally totally agree. Always several steps behind; always reactive. If it wasn't for Perrottet we would have been hunkered d... View
JS9 - 13 hours ago
Any actual evidence to support a claim of a 'mass exodus' to Queanbeyan to shop? There must have been some either exceptional... View
News 41

@the_riotact @The_RiotACT
Filled up lately? If it seemed a bit more #expensive than usual, you're right. Canberra #petrol prices are starting to climb, but they're still way below Sydney, Melbourne and Brisbane https://t.co/k8rDN6AkHA (1 hour ago)