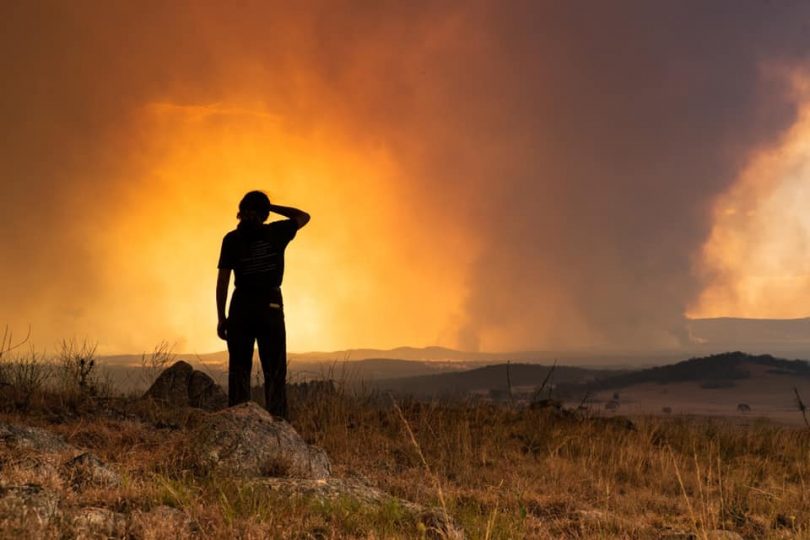 A total fire ban has been declared across the ACT and the south-eastern NSW region from midnight tonight (Wednesday, 4 December) to midnight Thursday, 5 December.

The NSW RFS has also declared a total fire ban across most areas of eastern NSW, including Bega Valley, Eurobodalla Shire, Monaro-Alpine area, Queanbeyan-Palerang, and the Goulburn and Yass areas.

The forecast fire danger rating for tomorrow is predicted to be very high in the Territory with temperatures set to hit a maximum of 28 degrees with wind gusts reaching speeds of up to 75km/h.

In the NSW regions under a total fire ban, the fire danger rating will be severe.

This means that any fire that starts could be uncontrollable and move quickly.

Fires continue to burn through the Tallaganda National Park, Bombay and Braidwood areas, as well in the Currowan area on the NSW south coast.

An ESA spokesperson told Region Media that 248 people have been deployed to fight fires near Braidwood since 25 November.

“About 200 of those are on-ground firefighters,” an ESA spokesperson said. “The ACT has also provided Incident Management Team personnel for day and night shifts.

“ESA has also been operating our airbase to support operations for the last week, involving about 20 personnel. Large air tankers and single-engine air tankers have been refilled with either water, gel or retardant.”

ESA personnel will continue to support NSW until the end of the week before reassessing where resources are needed with weather conditions expected to deteriorate from Thursday.

ESA has sent 426 people to help combat fires across NSW, and up into Queensland as well, this bushfire season as of 30 November.

However, an ESA spokesperson told Region Media that the deployment of people across NSW and Queensland will not impact the level of fire protection in the ACT.

Residents in bushfire prone areas are urged to review their bushfire survival plan or if you don’t have a plan in place, to take the time to create one.

Terri Lee Gill - 14 minutes ago
Get over it you have had ample warnings and if you can’t control the pedal under your foot to abide by the law not only in... View
Richard Vlazlovski - 44 minutes ago
Heading toward the social credit system just like in china . View
Chris Jones - 1 hour ago
Knowing our government they’d assess your home as part of your income to fine us more View
Community 28

Rob Calvert - 3 hours ago
Nothing regular dosing with Ritalin wouldn't fix. I'd recommend he look at a bit of the history of tennis......but I doubt he... View
Evonne Deans - 3 hours ago
Only can win a match with another player hey View
Grace Capz - 4 hours ago
Monica Tiffen no Gran he is gross! View
News 1