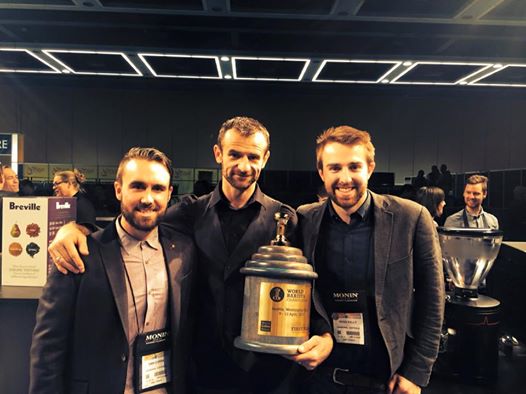 The long-term Canberran is the first Australian to win the title since 2003, beating finalists from the United States, Canada, China, the United Kingdom and France to do so.

It was Sasa’s first time representing Australia at the event, following his success at the Australian Barista Championships last month.

Congratulations Sasa, I was told about you by a Melbournian last month when I said I was from Canberra. Nice to get some respect at last for our fair city!

Kind of ironic though getting the World Barista Title in the USA. I was so tempted when I was there to say:

“Give me what you gave me the other day, but I don’t see it on your board, the ‘Luke warm Dishwater in a plastic toddler cup’.”

Well deserved. The reason I keep going to any of the ONA places for coffee or even places that use ONA beans is because of the passion Sasa put into his business in Canberra. I kind of want to taste the signature drink now.
Also ONA do train their baristas really well. Most of them know their stuff when it comes to making coffee.

Eddie Majcic - 15 minutes ago
Yes. We need the AIS precinct better utilised. Open it up more to the public get more people using it. It's a great facility... View
Heavs - 32 minutes ago
I actually like what the Tasmanian Government just did. They partnered up with Hockey and bought a rolling bunch of events to... View
Capital Retro - 1 hour ago
"The sports organisation would, of course, require a substantial amount of money from the ACT Government to attract the event... View
News 2

Vander Leal - 40 minutes ago
David Jackson maybe you don't see how public debt has been used to "keep the economy alive and thriving"... Nothing wrong wit... View
David Jackson - 3 hours ago
Interesting to know how? If I ran my business at a loss every year for the last twenty years and accumulated more debt while... View
News 1

nobody - 45 minutes ago
Colonisation turned this continent into the great country it is today. If colonisation had not taken place, then MLA Paterson... View
Community 7

Capital Retro - 2 hours ago
As is the 100% renewable electricity it uses is heavily subsidized, more than the diesel fuel the buses use. View
bj_ACT - 13 hours ago
Noting the Light Rail is much much more heavily subsidised than the buses. View
jam - 14 hours ago
The tram is more easily accessed by more people as it encourages dense development within its reach. It isn’t really possib... View
Business 3