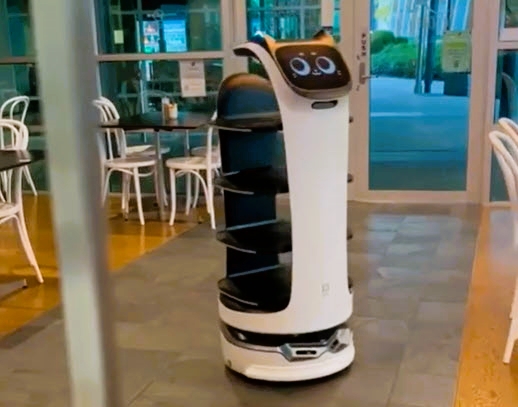 After months of desperately searching for staff, a Canberra café has finally welcomed a new member to the team.

Known for her charming smile and cheeky personality, BellaBot’s job is to carry food and drinks to and from the tables at Fat Goanna, and all for no wage. But that’s fine because BellaBot is a ‘premium delivery robot’, measuring 1.2 metres tall and weighing 55 kg.

Owner and employer Sam Vekiriya started the café at the Brindabella Business Park seven years ago, but over the past few months has struggled to hire new staff.

“We were really looking for staff, and we couldn’t find any over the past year,” he says.

“A lot of people apply, but when you ask them to come in for a trial or just to look at the workplace, they don’t even turn up.”

Sam still has a shop to run, so he began looking at autonomous robots as a way to free up extra hands. However, he says tracking one down wasn’t easy, largely because there are no local retailers. He ended up getting the Chinese-made ‘Bellabot’ from Sydney for a month’s trial.

“We quickly realised it works really well for us,” he says.

“Normally, we put plates of food on its trays and it goes to the table and asks the customer to take the meal from the tray. It also takes the dirty cutlery and crockery back to the kitchen.”

Sam bought the robot for about $30,000, but says it won’t be a replacement for a human.

“It’s not to replace the human – it’s there to help you out when there’s a shortage in your workforce. It also frees the staff from the more dirty and dull tasks. It saves us a lot of time,” he says.

According to a 2021 report from the International Federation of Robots, sales of robots for use in the hospitality sector tripled worldwide over the COVID-19 pandemic, largely due to demand for contactless service. Cleaning, medical and social robots also took off for similar reasons.

Up to 25 per cent of the world’s robot suppliers come from Asia, behind Europe and North America. The report states there is still a “huge potential” for hospitality robots with double-digit annual growth predicted.

The electric BellaBot can carry twice as much as two-handed individuals, all while consulting a programmed map of the store and using 360-degree sensors to negotiate items that might be out of place. The battery lasts up to five hours on a single charge, or enough for more than 400 deliveries, and can also be swapped out for 24/7 running. 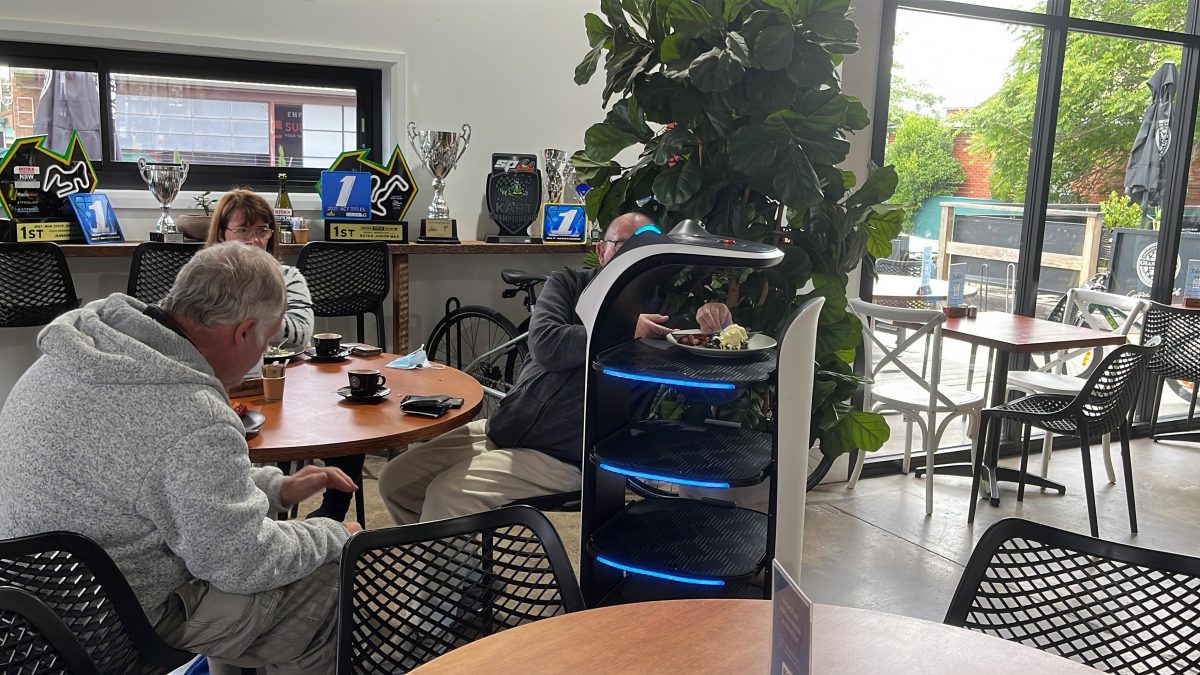 Customers at the Greengrocers in Goulburn have also been served by a very different looking waiter recently. Photo: Janice Bennett.

To boot, Sam says the customers “love it”.

“They really like having fun with it. It’s really smart and it understands so much of your conversation.”

For example, there are a number of programmed responses if a customer touches it. It will tell you how warm your hand is, say ‘don’t touch me’, or say ‘that tickles’ and laugh. If a customer waves at it, it will come and if they tell it to go, it goes.

At the moment, Sam says one robot is enough.

“But definitely for bigger cafes or restaurants struggling to get staff, I’d definitely recommend a robot waiter.”

The Fat Goanna Café and Bar is open from 7 am to 4 pm, Monday to Friday.