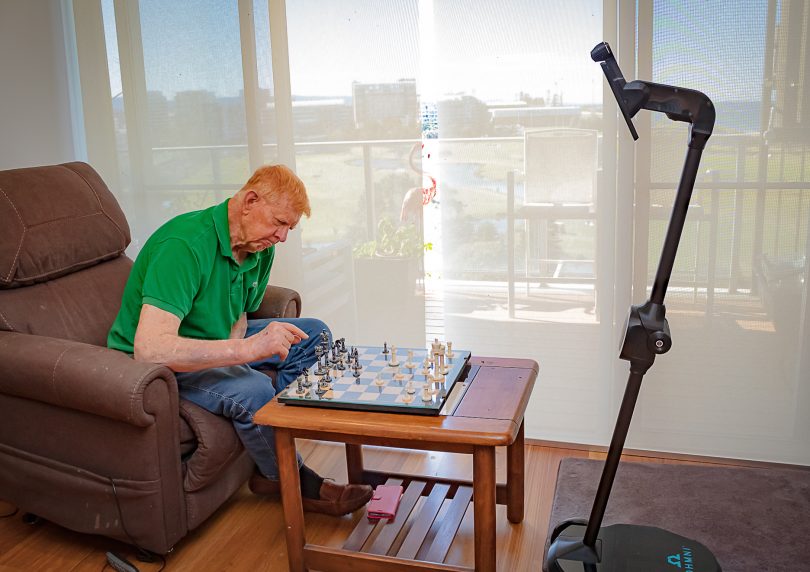 David Robson, an aged care resident, and his Ohmni robot, which he has fondly named Bluey, play a game of chess with his son via one of the robots supplied by Canberra company Robots4Good. Photo: Supplied.

Missing large sections of time at school due to illness, or detecting a fall in an aged care facility are just two examples of where robots are making a huge difference to people’s lives thanks to the work of a Canberra company.

Some robots can even play chess, albeit via a user on the other side of the screen.

The Canberra company Robots4Good, its CEO and social innovator Megan Gilmour co-founded the company with Marcus Dawe two years ago.

Now, more than 120 telepresence robots, which provide a human-like connection via a secure video link, are connecting people in places such as schools, hospital wards, boardrooms and aged care facilities.

The robot is a remote-controlled, wheeled device with a wide-angle camera and tilting neck that provides a presence much more personal than that of a handheld device or computer.

“It’s all about unlocking human potential to achieve more socialised solutions by connecting people in really important ways when they can’t be there in person,” Megan tells Region Media.

Megan says when her son had to receive a bone marrow transplant 11 years ago, it inspired the idea of using robots so kids like her son do not miss large chunks of school while receiving treatment.

Via the robot, a user is able to securely access it remotely to spend time with another person or people, such as a school classroom.

In the ACT, 15 students have already used the technology to continue their education. Two have had robots since the beginning of 2018.

At an aged care facility in Wollongong, the son of a resident logged in to a robot in his father’s room, only to discover his father had fallen.

“This person navigated the robot from his mobile phone and was able to respond to his father rapidly, which we think really highlights the difference between robots and other forms of technology,” says Megan. 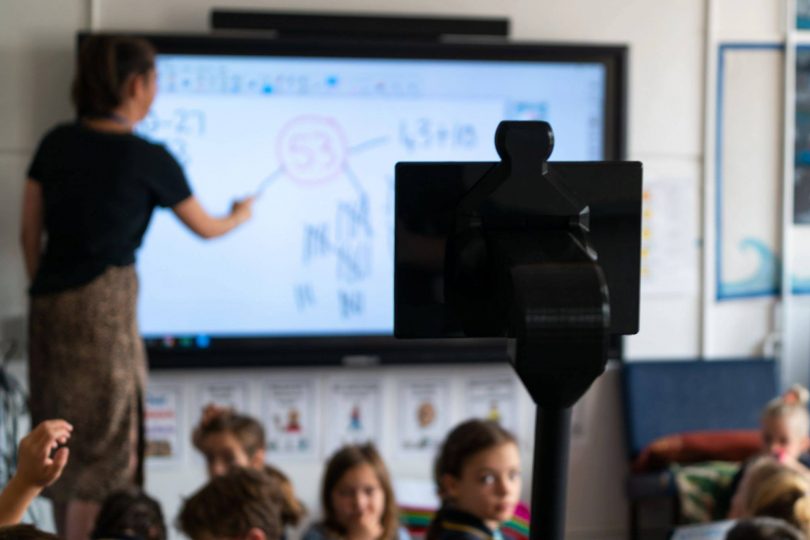 An Ohmni robot in a classroom, which helps to prevent students from missing large chunks of school while sick or injured. Photo: Robots4Good Facebook.

She said the idea came to life through the MissingSchool charity, also started in Canberra, so sick or injured kids are able to dial in to their classrooms and not have to catch up with large chunks of schoolwork (see YouTube video below).

“We’ve supported students with profound disabilities, including a student in Queensland who became a quadriplegic after a horse riding accident, and she uses the robot to dial into her classroom and effectively move around the room via the robot and participate in classroom activities,” says Megan.

The recipient of the robot chooses the people who can log in. The recipient also doesn’t have to hold or press anything and the robot auto-docks itself onto a charging station after calls.

It is also no surprise the technology has been fast-tracked by the COVID-19 pandemic, and Robots4Good holds an exclusive arrangement with OhmniLabs to supply the robots throughout Australia and New Zealand.

They have also been approved by every Australian state and territory education department and can be customised to any environment required.

“Our feedback has shown the robots reduce anxiety around a student’s connection with their peers, which in turn provides a process of support for that student,” says Megan.

“Parents and teachers have reported back to us that the robots solve the problem of absence, which also helps the student’s friendships and increases participation and supports learning.

Megan says additional research is currently being conducted that is more substantial than anything else worldwide.

However, her motivation is a simple one.

“It never gets old when you see a child dial in to a robot to see their friends and their classmates,” she says. “It’s just a great moment and definitely makes all the effort worthwhile.”

Mellissa Craft - 7 minutes ago
Ewa Adams come visit? View
HiddenDragon - 3 hours ago
Spiders eating deep space antennae? - a glimpse of the future if we embrace nuclear in the pursuit of net zero...... View
Bruno Marzano - 4 hours ago
If by SciFi movie, you mean documentary View
Property 13

Ian McLeod - 2 hours ago
We absolutely should not build across the river right up to the Brindabellas either as certain politicians have been pushing... View
Ian McLeod - 2 hours ago
Yep love it here but short sighted planning is becoming an issue and light pollution is worsening. The obsession with bright... View
Jordan Ennis O'Neill - 5 hours ago
yep... this place lost its mojo a few years ago unfortunately. things only get worse from here View
Motoring 3

HiddenDragon - 3 hours ago
Another case study of the incompetence and impracticality of this government. Consumed with the big picture, feel good, sound... View
Capital Retro - 10 hours ago
Oh, the perils of virtue signaling. It would be hilarious (like an episode of Yes Minister) if it didn't mean this will cost... View
Opinion 79

Julie Macklin - 8 hours ago
I cycled and rarely had to face the parking problems people complained about. When it rained I took the bus, even though I ha... View
Maya123 - 8 hours ago
We had flexitime and we had clocks, do there was no way someone could cheat on their hours. Whether the individual actually w... View
Julian Hayes - 8 hours ago
Because I've seen the truth employers simply make their employee's work a 12 hour shift as its still within not having to pay... View
Opinion 1

John Moulis - 19 hours ago
It's not a good tattoo. Tattoos such as this with script across the shoulders and on the lower arm should be scripted either... View
show more show less
*Results are based on activity within last 7 days

A father accused of punching his 16-year-old daughter in the head while they were in front of other children has...
Property 13

Property sales records continue to be smashed across Canberra, with a 1980s brick and tile home selling for $1.26 million...
Courts & Crime 1

It is "unforgivable" a woman bit a police officer twice when they were just doing their job, a court has...
Opinion 79

@The_RiotACT @The_RiotACT
Can your boss tell you what to wear at work? This week's poll asks whether common sense about workwear is actually all that common. And readers say the government should rev up our motorsports facilities https://t.co/DoNwT3GgIB (31 minutes ago)