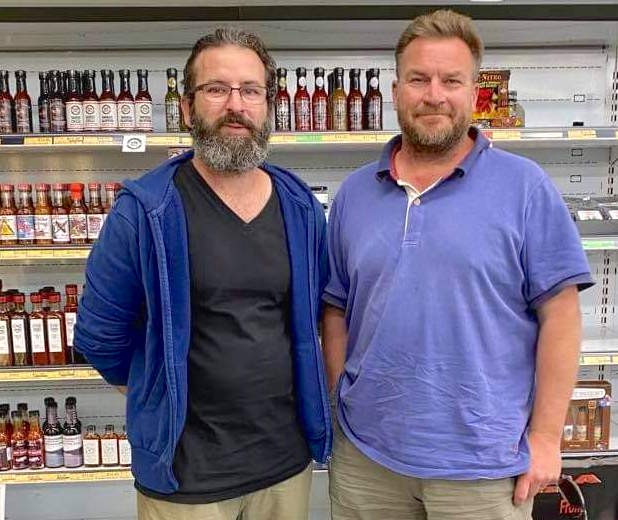 Chilli is red hot in Canberra: a new store with everything for the chilli connoisseur is about to open and the ACT’s first chilli champion will soon contest the Australian Chilli Championships.

Rob ‘the Dragon’ Morris was crowned Canberra’s chilli champion on 10 April when he survived a contest of fire-breathing proportions against two worthy combatants who ate raw chillies, some sprayed with Satan’s Spit chilli extract until they could no longer stand the heat.

READ MORE: Heat is on to find Canberra’s chilli champion

That event couldn’t determine Canberra’s chilli champion, so Trish, Travis and Rob returned for a last-person standing challenge in April where the trio tried to keep pace with their craving for capsaicin in a battle of guts over glory.

As all three wiped beads of sweat from their brows, Fraser Grocer owner Eric Bailey upped each challenge until Travis tapped out, followed by Trish when asked to spray two blasts of chilli extract in her mouth.

This left Rob a relieved winner, while Travis and Trish took relief from glasses of milk which were only allowed after exclusion from the challenge.

“I was asked by the guys behind the Australian championships to be brutal from the beginning of this challenge,” Eric said. “I’ve got to hand it to each of the contestants for really turning up the heat. I’m sure the after-effects wouldn’t have been fun.”

You can also watch a video of the contest on the Fraser Grocer Facebook page.

The inaugural Australian Chilli Championships will be held in Sydney on 24 July, featuring the champions from each state and territory. 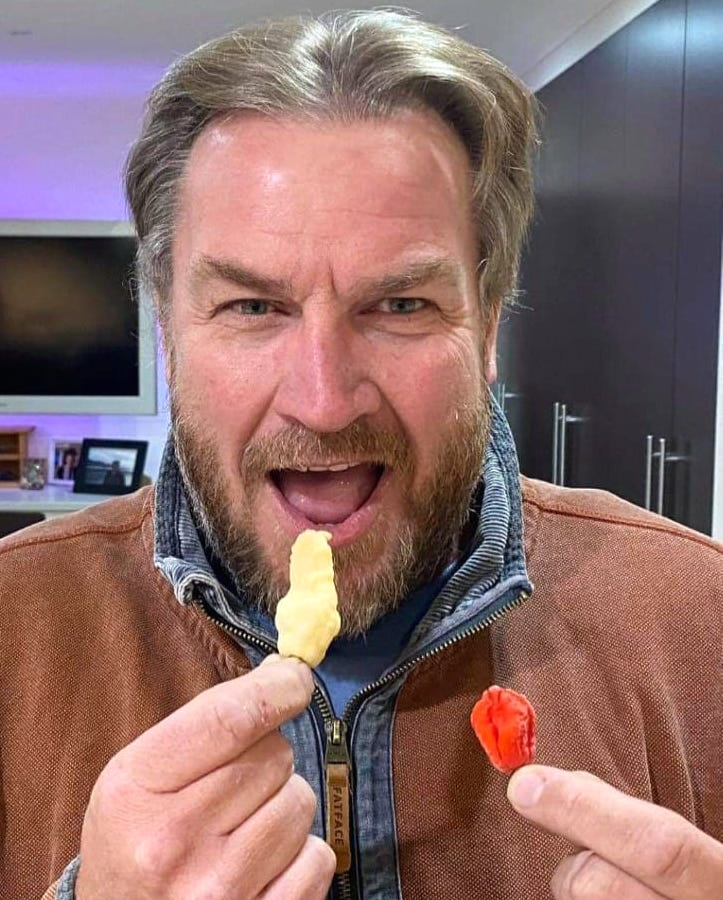 Rob ‘the Dragon’ Morris is Canberra’s chilli champion, pictured with a ghost chilli and a Carolina reaper. Photo: Supplied.

Eric has been stocking an array of chilli products in his independently-owned supermarket since opening, but after seeing the demand increase, he decided to focus more on chillies and less on groceries.

The Fraser Grocer store will close at the end of April, but Eric has secured a lease on a new shop in Federation Square at Gold Creek where he will open Canberra Chilli and Hot Sauces on 1 June.

The new store will have a range of products from small-batch producers around Australia and internationally after word reached America of a new store opening in Canberra. Products will range from sauces, rubs, condiments, chocolates, challenges, seeds and chillies.

“I’ve even managed to find a producer who has a preserved candy infused with habanero and Carolina reaper chilli,” Eric said. “It’s sweet but lethal.”

Eric said the heat had been turned up for chilli products in the region after he began stocking a range of products in his store at Fraser Grocer.

“People from all over Canberra have been coming in and having a look at the sauces which have been going extremely well, as well as chilli honey and the super-hot chilli powders that are 100 per cent pure chilli. People have been giving them a go but soon find out that less is more.”

Eric has also been getting orders from the Canberra Chilli and Hot Sauces website, while he is also looking for supporters for a Canberra Chilli Festival via a Go Fund Me page.

Hi Gassed There will be seeds, seedlings, pods, sauces, rubs, salts, sweets, challenges and more in the store.

I can’t wait to check out the new store!

Ian McLeod - 33 minutes ago
Jeff Smith I see your point but I don't think planners expected the Brindabellas to become such a valuable resource for menta... View
Jeff Smith - 37 minutes ago
I used to hold the same views, but then I realised that Not building across the river is just an artificial barrier. CMAG has... View
Ian McLeod - 4 hours ago
We absolutely should not build across the river right up to the Brindabellas either as certain politicians have been pushing... View
Property 15

assiduous - 1 hour ago
Low lending standards and inflated bonuses for originating mortgages based on ever rising values are core features of our ban... View
Pradeep Bishwakarma - 2 hours ago
Crazy market Shiva Sapkota! Only the RBA Can fix this View
Rebekkah Patton - 3 hours ago
Jamie Patton the price 😱 View
Community 13

HiddenDragon - 5 hours ago
Another case study of the incompetence and impracticality of this government. Consumed with the big picture, feel good, sound... View
Capital Retro - 12 hours ago
Oh, the perils of virtue signaling. It would be hilarious (like an episode of Yes Minister) if it didn't mean this will cost... View
Opinion 79

Julie Macklin - 10 hours ago
I cycled and rarely had to face the parking problems people complained about. When it rained I took the bus, even though I ha... View
Maya123 - 10 hours ago
We had flexitime and we had clocks, do there was no way someone could cheat on their hours. Whether the individual actually w... View
Julian Hayes - 10 hours ago
Because I've seen the truth employers simply make their employee's work a 12 hour shift as its still within not having to pay... View
Opinion 1

ChrisinTurner - 11 hours ago
When did the Stanhope plan expect this expansion to be finished? 5 years ago? View
News 12

chewy14 - 15 hours ago
I think it's unfair that people who work more years than I do, in jobs that pay more than mine does, end up having more money... View
Community 53

A huge family home in Florey has sold at auction for $1.6 million, setting a record for the Belconnen suburb....
Opinion 86

Heat is on to find Canberra’s chilli champion

@The_RiotACT @The_RiotACT
Can your boss tell you what to wear at work? This week's poll asks whether common sense about workwear is actually all that common. And readers say the government should rev up our motorsports facilities https://t.co/DoNwT3GgIB (3 hours ago)