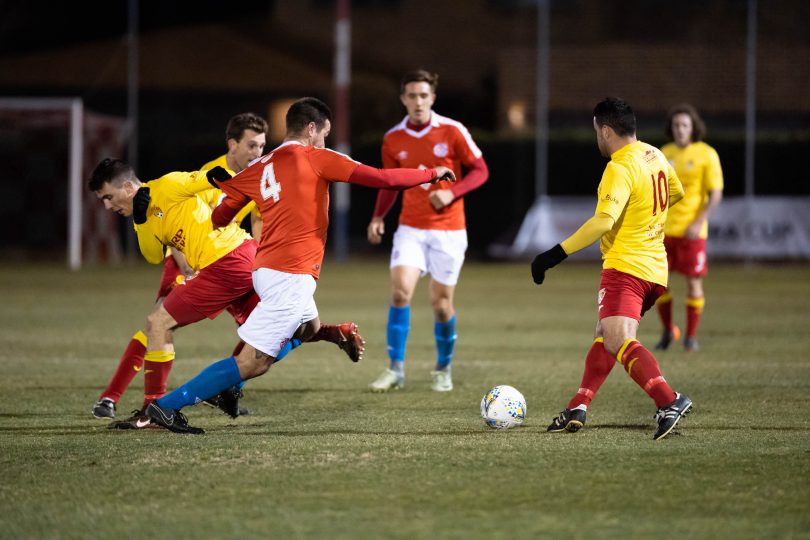 There was a flare, a penalty, a send-off, five goals and broken hearts as Canberra’s FC FFA Cup dreams were crushed by Broadmeadow Magic FC on a cold Wednesday night at Deakin Stadium (26 July).

It was Canberra FC’s first match in the national stage of the competition and despite a promising start, the Deakin side was overrun by the strong Newcastle-based side with a comprehensive 4-1 win.

Canberra’s star midfielder Thomas James opened the scoring in the 12th minute after beating the offside trap and driving into the box to sidefoot his shot into the side-netting.

But from that moment onwards, Broadmeadow dominated the contest, with Magic’s star strikers John Majurovski and Kale Bradbery leaving their mark on the match. Majurovski and Bradbery played a part in both goals before halftime, setting each other up for cool finishes to take the visiting side into the sheds with a 2-1 lead.

The second half got off to the worst possible start for Canberra, who conceded a goal in the opening minutes when Majurovski tapped the ball into an empty net after a fine save from Jordan Thurtell.

The men in red struggled to win the battle in the middle of the park with James playing a starring role in an otherwise missing midfield.

Macor threw on extra strikers to help claw back the lead, but to no avail, with his men unable to get the rub of the green from referee Kate Jacewicz, with some contentious decisions going against the home side.

The game was all but killed off in the 77th minute when Canberra’s Daniel Subasic was sent-off for his second bookable offence after a late studs-up challenge. A minute later, substitute Dino Fajkovic slid the ball under Thurtell to send the Magic into the FFA Cup round of 16 for the first time in their history.

But the night hadn’t seen the last of the action, with a flare being let off behind Magic’s goal and a comical passage of play from skipper Ian Graham summing up Canberra’s night. Graham’s penalty in the 88th minute was saved by keeper Paul Bitz before the midfielder smashed the rebound into the crossbar and blocked the follow-up shot from his teammate, with the ball going out for a corner.

Canberra FC now turns their attention to winning the league with three matches left before finals football kicks off, with the top of the table side facing last year’s champions Belconnen United on Sunday afternoon. 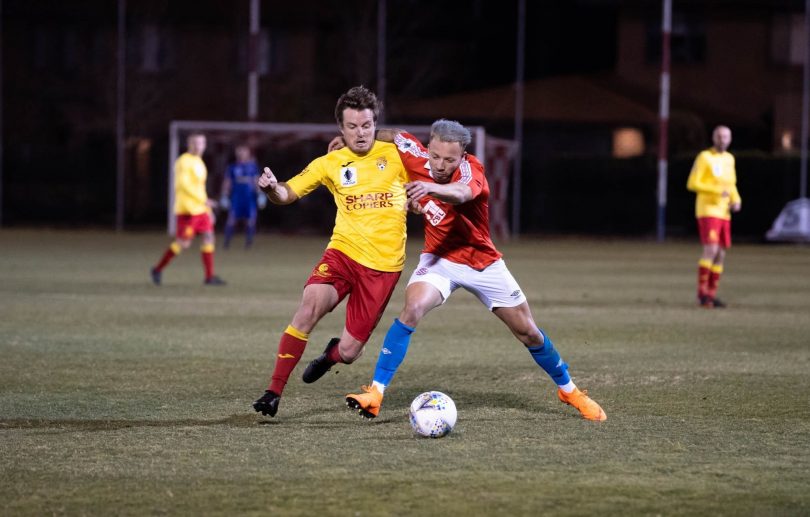 Lorna Towers - 8 minutes ago
You couldn't afford all the meat you get at a real Brazilian BBQ. View
Jodie Sharples - 4 hours ago
Julie Warren this answers our questions from yesterday View
Amy Stewart - 13 hours ago
Mark Turner this is what we drove past… View
Opinion 17

Julie Macklin - 10 minutes ago
Dingo Dom Shanahan No, the bus interchange needs to be better incorporated into the centre of the city, not removed. More peo... View
Richard Orchard - 39 minutes ago
Retail space is always troublesome to rent out- it’s either that landlords want rents and leases, with personal guarantees,... View
chewy14 - 4 hours ago
JC, $60million a year for one stage of light rail that services a tiny minority of the population. With the government commit... View
News 63

Finagen_erection - 55 minutes ago
It’s simply a result of poor investments by governments (plural) and failures in leadership within CHS. The CEO has quit, t... View
Kimmy Hunter - 3 hours ago
Well your very lucky because I had a family member told they can’t access nsw health and had treatment refused View
JC - 5 hours ago
Christian your $35 is not a co-payment that is you paying your doctor more than what Medicare pays then. The proposed co-paym... View
News 12

@The_RiotACT @The_RiotACT
@CSIRO has proposed a new National Collections building to be constructed at Black Mountain Science and Innovation Park in Canberra at a cost of $70m https://t.co/74MuQPOFXA (30 minutes ago)

@The_RiotACT @The_RiotACT
Messages of condolence are flooding in for the family and friends of a Canberra man killed while watching the Finke Desert Race near Alice Springs on Monday https://t.co/sDzPaNDQvg (50 minutes ago)