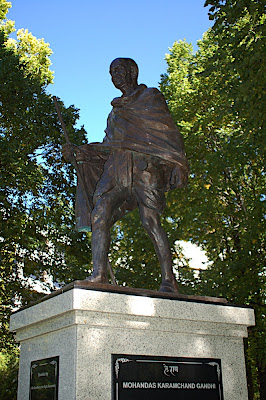 Newsblaze of Folsom California is aghast that grey Canberra bureaucrats have turned a deaf ear to the pleas of the Gandhi Monument Council and refused to name a street after Mahatma Ghandi:

Replying to a plea of Gandhi Monument Council headquartered in USA, John Meyer, Executive Director Client Services of Australian Capital Territory (ACT) Planning and Land Authority, said, “…Canberra’s place naming guidelines do not allow us to accept your nomination. These guidelines state that the ACT’s roads and public places are to commemorate Australians and things Australian.”

As an exercise for the reader I’m asking for other streets in Canberra already named for non-Australians?

UPDATED: The Indian MeriNews site has now picked up the story.

ANOTHER UPDATE: The LA Chronicle is now on the story. Punjab NewsLine is also joining the angry mob.

What about Adolf Hitler Drive out in Harrison?

I always thought Indian independance had more to do with Britain’s depleted military capacity after two wars against the hun than a few labourers sitting down on the job. You would think they would hold the man in higher regard.

What about Necromancy Street?

I assume Adelaide Ave is named after the city, not the German. But maybe King Edward Tce could be renamed Matthew Massey Tce

While we are off on a tangent, I want to punch whoever named Notepad Place in Dunlop. Some bastard so lazy that they just looked at their desk and used the first thing they saw.

The suburb of Harrison Ford, named after Indiana Jones? Or is that two adjoining suburbs?

What about Adolf Hitler Drive out in Harrison?

Let’s name a street after MARION MAHONEY GRIFFIN before we do Gandhi!

Street? Suburb. Haven’t we run out of PMs to name them after yet?

Let’s name a street after MARION MAHONEY GRIFFIN before we do Gandhi!

Yeah, but doesn’t the rest of the response to these guys say that we have commemorated Ghandi with a statue in Glebe park; isn’t that the photo? Thats got to be better than a length of bitumen?

Can I propose Adama Avenue or Gaius Balter Lane?

Ghandi a Cylon? Maybe he was haunted by a cylobabe in a hot red dress and a predeliction for ear tonguing?

Can I propose Adama Avenue or Gaius Balter Lane?

Maybe we should just name a whole suburb and get it over with, or new parliament house could become “Ghandi House” ….

Well, Sergeant Major Ghandi was a war veteran, and technically Australia was part of the British Empire while he was in Africa helping the Brits fight Zulu (or “Kaffir”, as he called them) independence, but I’m not sure that’s enough to warrant a street named after him.

If any foreign country is complaining perhaps they should build an ‘Immigration Bridge’ and just get over it? 😛

James Kirk Street in Gungahlin anyone?
Rhodes Place (where the Sth African embassy is)
Red Hill’s full of explorer names, many of which are not Australian
Not to mention who the frack was Northbourne???

Bill Baileys discussion was the first that I was aware that we had a Gandi statue.

Bill Bailey mentioned the staue in his concert the other night, actually, he wondered what it was doing in Canberra and hypothesised about some strange link between Canberra and Ghandi.

Christian Greten - 7 minutes ago
Renee Rosin That's good to hear. My main reference point is Sydney and I found it to be more aggressive that Canberra. I reme... View
John Doherty - 11 minutes ago
The difference between London and Sydney drivers is that in London they will give way at the last minute Sydney drivers would... View
Anne Maree Crowe - 13 minutes ago
Interesting. I have thought for some time that aggression had increased, but I also thought it might have been my imagination... View
News 15

DrLin - 56 minutes ago
Foresight serves you well, I received notice yesterday of a 12% increase to the price yesterday. View
Property 17

Carlie O'Shea - 1 hour ago
Kristy Keft is this your pub you rave on about? 😂 buy it View
Ben Lindsay - 2 hours ago
Neil Willis could almost walk to work from your joint View
Peter Taylor - 3 hours ago
Amanda Sanderson. Short commute. Walk to work, but getting home would be a struggle. View
Property 12

John Moulis - 1 hour ago
They must have a lot of pull. Even people on Sydney's upper North Shore who want to remove trees which are blocking the view... View
Pam Dovey - 2 hours ago
Margaret Hunt did you see this? View
Run_W - 2 hours ago
Wasn't this the Club that was complaining last month about being broke and if someone put planes on the lake it would mean th... View
News 7

Lewis P Owlay - 3 hours ago
I believe you mean the Delta Myna View
Lyndsey Simcoe - 4 hours ago
Graham Hatch see! They are psychos! View
Acton - 12 hours ago
Pigeons, those flying rats, are also pests. Growing problem with them nesting and crapping under solar panels.... View
News 12

Ben Johnston - 11 hours ago
"In a 50-minute ministerial statement this morning (22 June), Business Minister Tara Cheyne told the Legislative Assembly tha... View
summs - 13 hours ago
At least 15% of the budget went to 19 (2%) businesses whilst 23% of the businesses received less than $50? Was the scheme int... View
Lewis P Owlay - 13 hours ago
Worked a treat View
News 8

David Hennessy - 13 hours ago
Wish they were as quick to fix the problems in the CTP system for pedestrians and cyclists who are damaged for life but have... View
show more show less
*Results are based on activity within last 7 days

The Canberra Southern Cross Yacht Club in Yarralumla is about to set sail on a redevelopment of its lakeside hospitality...
*Results are based on activity within last 7 days

Motorists involved in collisions with vulnerable road users may face a specific charge and much stiffer penalties if convicted under...
Opinion 63

Sitting on a bunk bed in Australia's first sleepbus for women - before a single homeless woman, her children and maybe...
Opinion 137

@The_RiotACT @The_RiotACT
If you use your phone and drive you will get caught, Transport Minister Chris Steel said after new laws allowing mobile detection cameras in the ACT passed the Legislative Assembly this week https://t.co/zYUIF8PzLk (1 hour ago)

@The_RiotACT @The_RiotACT
A judge has found while Alan Whittley sped at the Moruya River bar before a girl in a boat he skippered drowned in 2018, he was not guilty of criminal negligence https://t.co/s4atOSUVPS (3 hours ago)