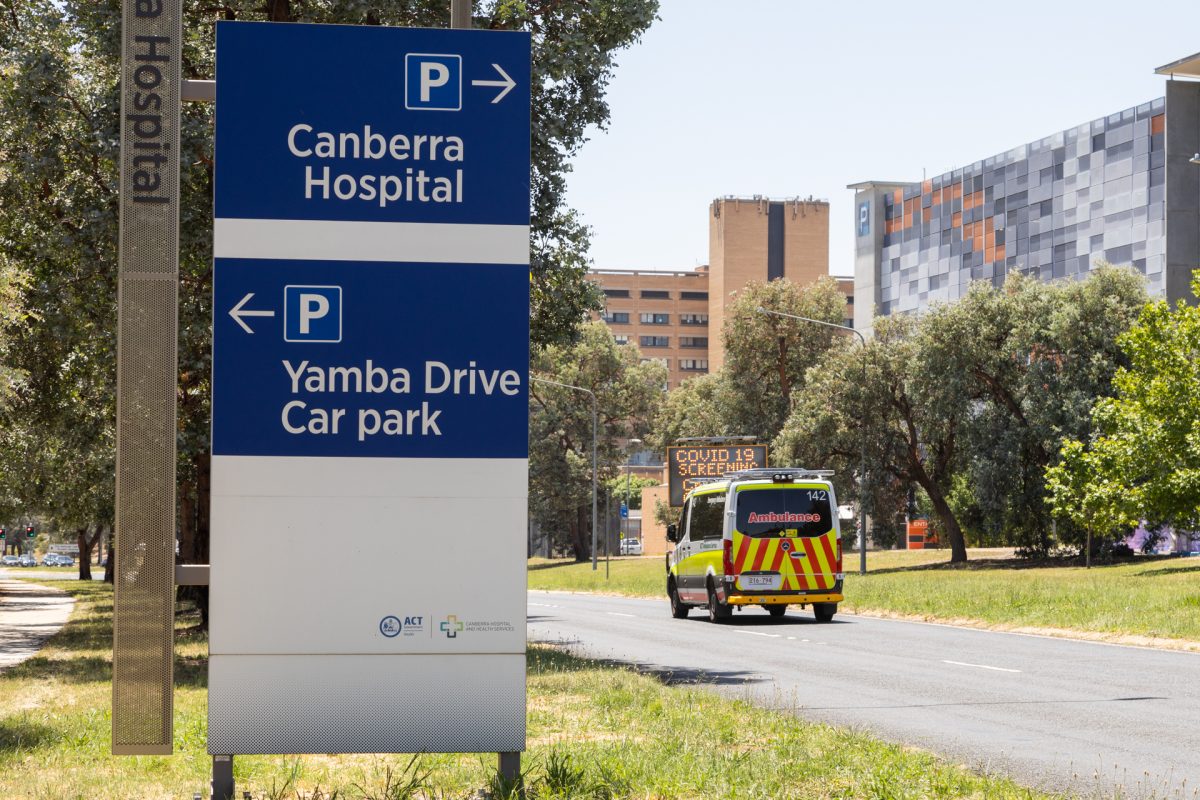 Judith Flynn died after falling while she was a patient at Canberra Hospital in 2019. Photo: Michelle Kroll.

A Coroner has found Canberra Hospital failed in a number of ways before Judith Gaye Flynn fell and ultimately died from bleeding on the brain in 2019.

However, the hospital wasn’t directly responsible for her death.

Coroner Glenn Theakston said while the hospital may not have been able to prevent her final fall, failures in implementing various controls “individually and collectively increased the risk” of both her falling and seriousness of any injuries.

Mrs Flynn was 72 when she was admitted to Canberra Hospital on 14 January 2019 following a fall. She was given a bed in the general medicine ward despite “fluctuating cognitive functioning” and a history of suspected falls.

She fell again on the evening of 17 January while reaching for a tray. A physiotherapist assessed her as a high risk of further falls and recommended an assistant in nursing supervise her.

Mrs Flynn was in a regular hospital bed and she was seen climbing over the raised side rails on the afternoon of 18 January. A plan was made to move her to a room closer to the nursing station so she could be better supervised, but a bed didn’t become available before her final fall.

After eating dinner that evening, Mrs Flynn asked to use the toilet, which was occupied, so she agreed to stay in bed while the nurse grabbed a sanitary pad.

Within seconds of the nurse stepping out, there was a bang and Mrs Flynn was unresponsive on the floor.

Scans revealed she had suffered a large subdural haemorrhage. She never regained consciousness and died on 20 January.

Mrs Flynn’s family had raised concerns about her treatment and care, mainly how her fall risk was managed.

Mrs Flynn wasn’t provided a hi-low bed, which could reduce the risks and severity of falls if they were from beds, even though the matter had been raised.

“The requirement for such a bed was noted by the admitting nurse when Mrs Flynn was admitted to a general medicine ward. However, that requirement was not ticked off on Mrs Flynn’s care plan,” Coroner Theakston said.

“It remains open on the evidence that, notwithstanding the best intentions of staff, the task of obtaining a hi-low bed for Mrs Flynn was left to someone, somewhere, to do something about it.”

Bed rails were also used on Mrs Flynn’s bed, which went against hospital policy for “confused and disorientated patients” who were mobile.

“The notes record that as late as 4:25 pm on the day of her ultimate fall, the bed rails were still raised. That is a concern.

“However, the unchallenged evidence was that at the time of Mrs Flynn’s ultimate fall, the bed rails were not raised.”

Coroner Theakston was concerned that the hospital failed to inform Mrs Flynn’s family about her earlier fall, the decline in her cognition, or her “confused and unsafe” movements on the afternoon of her fall. He said this deprived the family of coming to help.

The hospital was also questioned about why Mrs Flynn was put on the general medicine ward rather than the geriatric ward.

It was revealed there was an “agreement” that patients over the age of 80 went to geriatrics, and under 80 were admitted under general medicine.

However, Coroner Theakston noted the policy allowed patients under the age of 80 to be admitted to geriatrics where dementia made treatment difficult.

“In Mrs Flynn’s case, there was uncertainty about the cause of her fluctuating cognitive functioning and a diagnosis of dementia was yet to be made,” he said.

“There is something uncomfortably incomplete about the way the evidence fell to suggest that a general medicine ward was adequate for the daily care of Mrs Flynn, while the very controls contemplated to address her high risk of falling could not be implemented there.

“While it is not known whether the Geriatric Medicine Ward would have had better access to those or other controls, a professional application of risk management principles would have involved asking that question.”

Mrs Flynn’s potential admission to geriatrics would have also depended on whether a bed was available.

Since her death, Canberra Hospital has made a number of changes, including buying more hi-low beds, changing the process for requesting such beds, safety huddles at the start of each shift to discuss patients at risk of falls, and a mandatory online Banner Mobility Assessment Tool for some nursing staff.

The hospital also conducted an internal analysis, which led to redesigning the Falls Risk Assessment form to add a component addressing ‘cognitive state risks’ and requiring staff to complete a falls education and risk management tool.

Overall, Coroner Theakston said he was left with the “strong impression” that the hospital as a whole “did not operate in a coordinated way” to ensure controls were put in place, “notwithstanding the best intentions of staff”.

“[We] acknowledge the grief, loss, and sadness that those who loved and cared for Mrs Flynn have experienced,” they said.

“We will continue to consider any further opportunities to improve existing systems and processes and keep improving the quality of services to patients who receive medical and mental health care in our facilities and/or in the care of our team members,” they said.

My elderly parent was in a hospital in Canberra and fell out of the bed (and got a fracture) because the hospital staff did not provide proper supervision. Hospital staff seem too busy to watch patients properly, and sadly many of the staff are from overseas and do not speak English properly, and are unable to adequately communicate with patients, particularly elderly patients. Canberra has a very poor health and hospital system, and a terrible education system too.

In the age of computers and AI, we still need a nurse to tick a box to manage a patient.
Seems bizarre, we spent billions on AI to secure your bank account but when you’re in hospital something like a fall risk can slip through the cracks.

The hospital seems like a collection of antique measures, sticky tape and gospel, rather than something that belongs in the 21st century.

Perhaps we wouldn’t need as many new buildings if it was run better. New building doesn’t improve the waste.

Astro, I don't need to make up things, you simply don't understand the logical outcomes of the… View