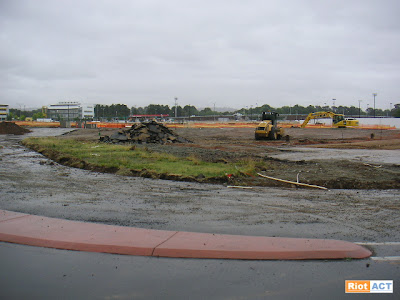 For those of you who have not had the pleasure of visiting the Canberra International Airport recently or never ever go to the Virgin/Tiger end of the Terminal [I was curious myself and have spent more time than is usual at the place] here is a photo of current progress on the multi-storey carpark.

Getting out of the Airport at about 6 pm isn’t entirely straighforward either. While not ‘city standard’ traffic, it’s still a bit of a surprise to do a couple of clicks of creeping and merging. 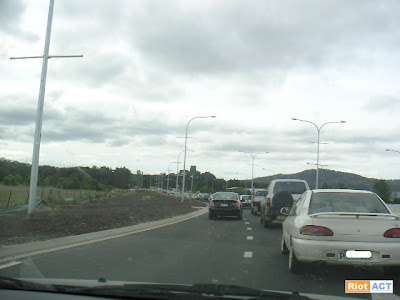 What a breakthrough! I don’t know how we’ve been getting by for so long without this then Thumper 🙂

It probably means signs to show you where to go.

WTF is an intuitive access carpark. One that can tell what a car is as opposed to a motorcycle or bus?

Maybe we should simply move the airport, well, at least flying and associated bits, to, say… MacArthur?

While hanging around the Terminal I had ample opportunity to read the remarkable Canberra International Airport [CIA] publication that explains how the people of the CIA are gifting the people of the ACT with a world class airport facility. As I recall it will involve intuitive access to car parks and other facilities and will be cutting edge in every detail.

Realistically, I think it still compares favourably to Northbourne Avenue [with all the dilapidated flats] as a Gateway to the Capital.

Like I said in a post last week – if we were living in several other countries Mr Snow would have been “corrected” a long time ago.

The whole airport traffic issue is a joke. Sadly it would appear that no-one wants to take any responsibility in rectifying the current situation.

No one’s noticed the duck pond built at the Pialligo intersection yet? It’s a long and narrow pond alongside the road, as if it’s supposed to catch bad drivers and drown them. I’ve been too busy driving to take a photo of it and steal the duck souls, it’s at a one lane divides into two point.

that’s cos people are taking pictures, stealing the souls of the workers.

Actually it isn’t really under the control of the Commonwealth either, except of course they created the loophole that allowed all this to happen.

I think that the Commonwealth Government specifically approved the construction of BBP and Brand Depot. I hope that the ministers who signed off on those decisions have enjoyed their time stuck in traffic jams.

toriness, Tempestas is daed right. ACTPLA is not at fault this time, it is all unedr the control of the Commonwealth. They obviously give even less of a sh!t about Canberra planning and good outcomes for residents than what ACTPLA and NCA do.

Actually it isn’t really under the control of the Commonwealth either, except of course they created the loophole that allowed all this to happen. Put simple when the airports were privatised a loophole was created that meant they didn’t have to seek local planning authority to expand. The intent was so genuine airport development didn’t get caught up for years in pety local governments. But the same laws have allowed more or less anything to be built, the result can be seen at Canberra airport.

At least the new fed government are trying to make them more accountable and help pay for some of the burden they place on local infrastructure, such as roads and public transport.

toriness, Tempestas is daed right. ACTPLA is not at fault this time, it is all unedr the control of the Commonwealth. They obviously give even less of a sh!t about Canberra planning and good outcomes for residents than what ACTPLA and NCA do.

… – what on EARTH was ACTPLA thinking in approving the location of all those buildings out there?????

Um I may have missed the irony but I thought the whole point of airport development was that it was outside of local planning controls. That planes land there is a just a minor inconvenience to the owners of the airport.

For some this is now just the daily routine. I remember when I used to be grateful for the lovely grounds and greenery out there. Certainly makes sure you are awake for the drive… changes to the roads are just a new obstacle in addition to the heavy machinery and volume of traffic.

At one stage I was concerned that the new traffic lights would be in addition to the roundabout (like in Brisbane), and I had little confidence that Canberrans were ready for that!

I am so glad that I usually only go to the airport for first flight out, last flight back. It may be dark but there’s less traffic and I can see the sparkle of their lights.

Yeah, it’s always nice when the cab meter ticks over to $10.00 before you’ve even *left* the airport.

having had the displeasure of returning to canberra on flights around 5:30pm twice this week as well as another similar return flight recently – can i say it is a bloody nightmare out there at the moment. thanks in the main to the recent re-location of several government departments (or parts of those departments) now at the airport complex – what on EARTH was ACTPLA thinking in approving the location of all those buildings out there?????

Martin Bonsey - 51 minutes ago
There has been a very lengthy and expensive 'conversation' about "Very Fast Trains" and "High Speed Rail" also known as bulle... View
Mark Scarborough - 6 hours ago
As long as it is cheaper than flying. View
Justin Watson - 6 hours ago
Yeah it wouldn't be too expensive to get rail travel down to 2 1/2 hrs between Canberra and Sydney. A 1 hr fast train would b... View
Community 140

Allan Glass - 1 hour ago
Well if it's a hazard to the driver maybe they should pay attention to the road. N leave these trees alone. View
Amanda East - 2 hours ago
Noooo.... View
Bec French - 3 hours ago
GO cut something else down!!!! leave them be! View
Food & Wine 129

Kylie Klose - 1 hour ago
We love Leong’s kitchen!!! Amazing food and fabulous service. Many fond memories of dinners and birthday parties there when... View
Opinion 16

Jan Sandra Cornish - 3 hours ago
We could raise their wages and put more money into training them. Rostering changes could work too. Police have different wor... View
Louise Flood - 5 hours ago
A nice idea but how will our esssential workers do this? Nurses, fireys etc. View
Kurt Neist - 7 hours ago
I wash dishes, order supplies and do deliveries. Can’t do any if it from home. At least the pay is rubbish...... View
News 6

Nick Anderson - 5 hours ago
Just to add on, the snowy mountains are already feeling the stress from Climate Change: http://press-files.anu.edu.au/downloa... View
Nick Anderson - 5 hours ago
Funny. A ski resort implies that it would still snow in the foreseeable future. A future without severe climate change. Last... View
Rainer Busacker - 6 hours ago
It takes vision and a we can do it attitude. With local participation. We have enough naysayers.... View
News 30

Elroy Jones - 6 hours ago
Completely agree View
duc nguyen - 7 hours ago
No one comes to Canberra and thinks the current West Basin is the place to be. Even though it is at the heart of the Nation's... View
Neil Chandler - 11 hours ago
I would have thought that whatever "heritage" the area had, both european and indigenous would have been pretty much devastat... View
Food & Wine 5

Rose Mary - 11 hours ago
David Blanchfield put it on the menu! View
News 4

Greg Garth - 15 hours ago
Gabriel Spacca Or a mixture of smoke and steam. View
Gabriel Spacca - 18 hours ago
If you pour water on fire it’s likely to cause more smoke not less. View
Sport 30

Nikos Manikas - 19 hours ago
Dianne Latimer if Brisbane get a 2nd team then all Ch9 will do is alternate between the 2 Brisbane teams. just like now they... View
show more show less
*Results are based on activity within last 7 days

While many restaurants identify with their customers via websites and social media posts, the owners of Leong Kitchen know their customers...
Best of Canberra 121

For many, the thought of visiting the dentist can come with a wave of anxiety. But even when you do...
News 74

@The_RiotACT @The_RiotACT
The Great Shower Timer Experiment is about to get underway in Canberra thanks to Icon Water and residents of Gungahlin https://t.co/bLbZPuxVD4 (1 hour ago)

@The_RiotACT @The_RiotACT
Resources developed for virtual excursions to Old Parliament House have been put to good use during COVID-19 restrictions but will also help remotely located students from across the nation to visit the Museum of Australia Democracy https://t.co/grpAeze1pX (5 hours ago)