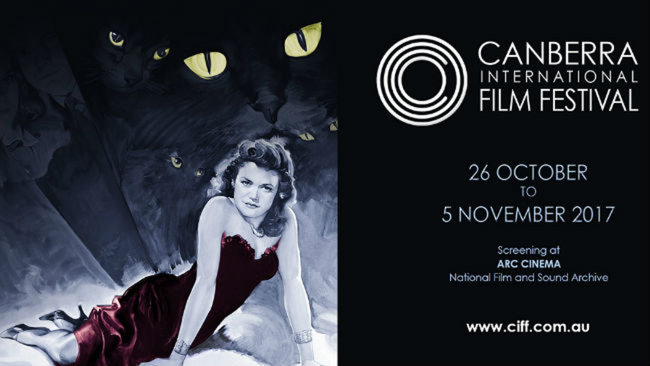 Over the last few years, the Canberra International Film Festival has found a new home at the National Film and Sound Archive, following a long-standing tenure at Dendy Cinemas. The 2017 celluloid celebration is sponsored by the Academy of Interactive Entertainment, the ACT Government, Screen Australia, New Zealand High Commission, AIATSIS and Friends of the National Film and Sound Archive. It all kicks off Thursday 26 October.

Two thematic streams will comprise the 2017 edition: contemporary and retro. The contemporary section offers 13 features from across the globe; even from right here at home. The retrospective rest of the 29 festival films includes spotlight/highlight – JACQUES TOURNEUR RE-DISCOVERED.

Born in Paris, 1904, the legendary French director enjoyed a storied career across genres. Tourneur died in 1977 aged 73, but not before racking up an impressive (and coincidental!) 73 directorial credits to his name. CIFF 2017 will screen six of Tourneur’s best: Opening Night psychological thriller Cat People (1942); supernatural thriller Night of the Demon (1957); the duplicitous film-noir masterpiece Out of the Past (1947), starring Robert Mitchum and Kirk Douglas; plucky female pirate fable Anne of the Indies (1951); and lastly, the post-Civil-War-frontier-Western Stars in my Crown (1950), which will be followed by documentary Jacques Tourneur: The Medium (2015), featuring commentary from famed Bertrand Tavernier among others.

INTRODUCING: PAT JACKSON takes another trip down memory lane to bring us two of his works: a special 2K restoration of the acclaimed British wartime naval drama Western Approaches (1944) and White Corridors (1951), laying a foundation for the ubiquitous hospital dramas with their interweaving storylines which would populate our screens years later. Googie Withers embodied the strong central female character – a recurrent motif across this year’s festival.

In honour of Googie Withers – a star of British cinema between the 30s and 50s, and subsequently a celebrated theatre performer down under in the latter half of the 20th century – CIFF 2017 pays heed to her legacy with two entries comprising the GOOGIE WITHERS CENTENARY: the aforementioned White Corridors (1951) and It Always Rains On Sunday (1947), exploring the malaise of the British working class and one of Withers’ three collaborations over the course of her career with director Robert Hamer. Googie Withers passed away in Sydney, 2011, at the age of 94.

Speaking of Australia, the Contemporary component also includes a FOCUS ON CANBERRA, featuring two fresh films. Canberran Kim Beamish directs documentary Oyster (2017) about the trials and tribulations of an oyster-farming family in Merimbula, NSW. Beamish will be on-hand for a Q&A following the screening.

Star Sand (2017) set further afield in Okinawa, Japan, focusses on the relationships between an American soldier, a Japanese deserter and a young Japanese woman, after she finds the two of them hiding in a cave amid WWII. A shift to present-day Tokyo reveals the indelible etchings each individual endures. This is the captivating debut feature from Roger Pulvers who lived in our wonderful city for eight years and “still calls Canberra home”. Set to the sounds of inimitable and prolific composer Ryuichi Sakamoto, the soundtrack is an added bonus.

With its own local connection, the newest feature from Warwick Thornton (Samson & Delilah), We Don’t Need A Map, is a documentary which intellectually unpacks the recent proliferation of the Southern Cross and the varying symbolism its appropriation/misappropriation has taken on. Queanbeyan poet and writer Omar Musa is one of various voices in the film which opened the 2017 Sydney Film Festival.

CIFF 2017 is blessed with an Australian Premiere. Winner of the Critics’ Choice Award at the Cannes Film Festival, French production Makala (2017) is a contemplative yet incisive look at life in the Congo. We follow 28-year-old Kasongo as he tries to make ends meet, surviving on a pittance as a charcoal-maker. A thought-provoking and challenging work whose images speak to the modern inequality unfortunately rife in our world.

Another new release fresh from Cannes is Palme D’Or Winner The Square (2017), a scathing and surreal satire of Swedish self-indulgence in the contemporary art world. Written/directed by Ruben Östlund (Force Majeure), and starring Elizabeth Moss (Mad Men, Top of the Lake, The Handmaid’s Tale).

On Body and Soul (2017) is an interesting inclusion from Hungary which portrays an unusual love story set primarily, of all places, in a Hungarian abattoir, and exploring the connection – in dreams and in reality – between a man and his autistic female co-worker. Winner of the Berlinale Golden Bear and Best Film at the Sydney Film Festival.

NFSA RESTORES also exhumes Australian firebrand feminist feature Shame (1988), bringing it back to our screens re-mastered and complete with career-defining performances from Deborra-Lee Furness and Simone Buchanan in director Steve Jodrell’s only ever feature film.

Opening night screening of My Year With Helen (2017) from NZ director Gaylene Preston, is timely pending the incoming Prime Ministership of Jacinda Ardern. This documentary follows former NZ Prime-Minister Helen Clark, Ardern’s political hero, as she strives to secure the position of Secretary General of the UN.

Crowning jewel is the Closing Night 4K restoration screening of David Lean’s epic Doctor Zhivago (1965) which holds special historical significance for Canberra and the late great Center Cinema, which ran from 1967 until 2003 in what is now Academy Club on Bunda Street. Visit CIFF 2017 on Facebook for fascinating backstories to the films featured.

The festival runs from Thursday 26 October – Sunday 5th of November. Adult tickets are $16.00 and concessions are $13.00. Visit www.ciff.com.au for bookings and more information

You can also buy tickets over the counter and pick up the Official Programme at the NFSA.

Adam Best - 7 minutes ago
Josh Anderson We still have demerit points, champ....... View
Adam Best - 8 minutes ago
Steven Miller well yes, actually. If it's a financial penalty for a crime, then that financial pain should be equal for the e... View
Jess Thomas - 1 hour ago
David Deb Cossart that's the thing: people who can afford the fine can afford to speed. Changing this would mean that no-one... View
Food & Wine 1

Kali - 42 minutes ago
Poster boy for the 'it's all about ME' generation. View
Jennifer Albs - 2 hours ago
He is great player and pretty talented man, but his behaviour over shadow everything and not to mention mode swing, plus acti... View
Stewart Mcdonald - 2 hours ago
Lucy Humphreys I love the game but the sterile personalities bother me I think the game representing different social groups... View
Food & Wine 6

chewy14 - 1 hour ago
Ha, that should read uninformed, not uninformed. BJ, on that link you've provided, have you actually read the ICRC report on... View
chewy14 - 1 hour ago
No, To be honest, It's because I think you're uniformed on the scope and causes of the problem, the research that has been oc... View
bj_ACT - 3 hours ago
I’m not just criticising this project from 2014, I’m criticising two decades of broken promises, failed projects and the... View
Community 41

@the_riotact @The_RiotACT
#Tumbarumba's saddled up for its social event of the year this Saturday 29 January. #Turfclub president John McIntyre says the Tumba Cup's set to be one of the best as #families get together after COVID lockdowns https://t.co/U3sL5ZTdwY (17 minutes ago)