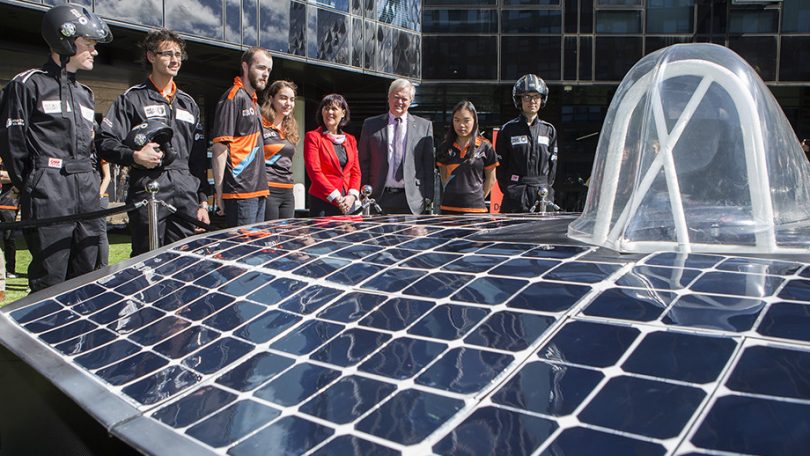 The Australian National University’s Sol Invictus team has unveiled its entrant in the 2017 Bridgestone World Solar Challenge, along with a $20,000 sponsorship from the ACT Government.

Two years in development, the MTAA Super Charge entry is the ANU’s first attempt at the race, which brings together competitors from more than 26 countries, including some of the world’s leading universities and technical colleges such as MIT, Stanford, and Cambridge.

It has cutting-edge solar panels and Lithium ion battery technology to power a highly-efficient electric motor.

The solar cars must complete the difficult 3,000km course from Darwin to Adelaide through the harsh Australian outback from 8 to 15 October, powered only by the sun.

The MTAA Super Charge, has entered in the highly competitive ‘challenger’ class, which stipulates a maximum vehicle length of 5m, a maximum width of 2.2m and a maximum solar array of four square metres.

Sol Invictus project lead Emily Rose Rees said it was exciting to be only days out from the challenge.

“It’s been especially difficult because it’s the first time we’re doing this and we don’t have a previous car to build on or previous team members for advice. But it’s exciting because we can forge our own path,” said Ms Rees.

“I want to thank everyone in the project who has put in so many hours to ensure we’re ready to take the start line.

“Now we can go and see how we compare to all the other teams. Our aim is not to win but cross the finish line.”

ANU Vice-Chancellor Professor Brian Schmidt congratulated the students for making their ideas a reality with the completion of the Sol Invictus car.

“It’s an amazing challenge and I wish the students all the best for the gruelling race,” Professor Schmidt said.

“On behalf of the university we are immensely proud of all the students who have worked on this project.”

ACT Minister for Climate Change and Sustainability Shane Rattenbury announced the $20,000 sponsorship as part of the ACT’s support for leadership in innovation, renewable energy and higher education.

“The race is the perfect ‘vehicle’ to help promote the ACT as the home of innovation in renewable energy,” he said.

“I wish the team well. I know they have been working hard over the past two years to fine-tune their design.”

Mr Rattenbury said the ACT Government’s commitment to renewable energy was seeing significant research and development happen in Canberra, with Government support for an $8 million research program on battery storage and grid integration at the Australia-leading, cross disciplinary Energy Change Institute at the ANU.

“Competitions like the World Solar Challenge work to inspire creative thinking around how we can integrate the shift towards renewable energy with our transport sector. It’s exciting to know that some of that inspired thinking is happening right here in Canberra,” he said.

“The ACT is fast becoming a global leader in the move to reduce greenhouse gas emissions and address climate change. We are on track to reach our targets of 100 per cent renewable electricity by 2020 and 40 per cent below 1990 level emissions by 2020.”

Xuan Le - 9 minutes ago
I wish I knew this earlier.... View
Allan Hill - 2 hours ago
Good one Todd man. Got confidence in you... View
Todd Wills - 3 hours ago
Lisa Sly been doing some prep so hopefully all good xxxx View
News 43

Dan Myles - 19 minutes ago
Jorge Gatica so they now treat drugs addiction as an illness? or a great source of crime statistics to use for more funding? View
Ashley Latimer - 37 minutes ago
Bryce Jarvis Thanks bro, edited. View
Denise Cirson - 48 minutes ago
Sorry Bryce but in my opinion that is a load of rubbish.... View
News 9

Daniel Trevarthen - 43 minutes ago
Scott Abela except these ones catch fire even when they are just parked, not even charging! View
Jak Kanard - 2 hours ago
Bob Baxter - got to love it when a plan comes together...who knew this could possibly happen...doh ! View
Bob Baxter - 2 hours ago
Jak Kanard 🤣 View
News 8

COVID-19 lockdowns forced many Canberrans to work from home over the last quarter and, being winter, the heaters were on...
News 45

@the_riotact @The_RiotACT
Events are making a comeback to Canberra now that lockdown has eased. And the timing couldn't be better! #Oktoberfest, #Halloween and #MelbourneCup Day are just some of the highlights to stick in your diary this week https://t.co/oXZLz4Gybr (24 minutes ago)