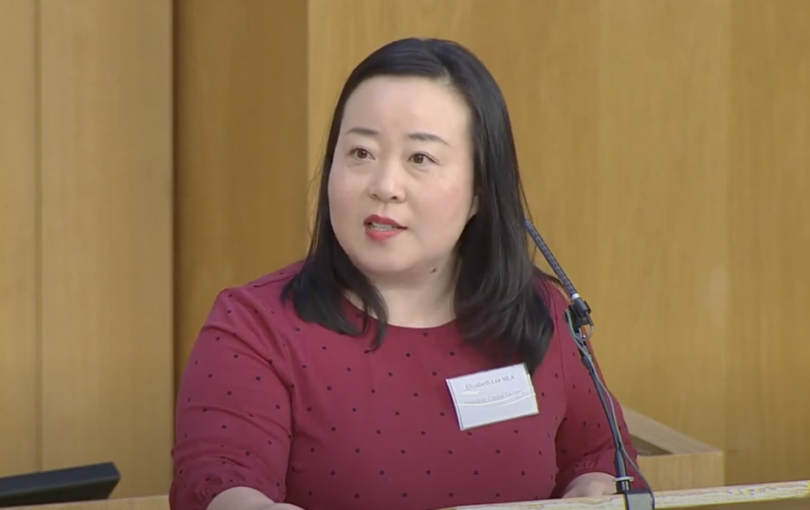 One of Elizabeth Lee’s biggest signals to ACT voters about the Canberra Liberals under her leadership in 2021 was attending the COP 26 UN Climate Change Conference in Glasgow in November.

Since taking over from Alistair Coe after the 2020 ACT election drubbing, Ms Lee has assiduously sought to pivot the Liberals away from what was perceived to be an unelectable position on the right of politics.

Looming large for the local party was the shadow of long-time powerbroker Zed Seselja, which had allowed Labor and the Greens to paint the Liberals as the most conservative party in Australia.

The socially conservative Mr Coe, while not in Senator Seselja’s thrall, had taken stands on issues such as same-sex marriage, abortion, assisted dying and drug law reform that were thought to be out of step with the most socially progressive jurisdiction in Australia. Or at least that’s how Labor and the Greens like to portray Canberra voters, and the media doesn’t disagree.

Pejoratively known as Australia’s petri dish, Canberra has been willing to embrace progressive causes, but it’s a label that is overplayed on both the left and right.

The truth lies somewhere in the middle and that’s where Ms Lee has headed, dropping ideological baggage, adopting a more credible tone and refocusing on bread-and-butter issues.

It suits her moderate outlook and has given more scope for the Canberra Liberals to connect with voters and broaden its appeal.

In shaking off that baggage, Ms Lee has backed the Barr Government’s climate policies, refined attacks on light rail, maintained the rage against health administration, supported territory rights, and homed in on hot-button local issues such as potholes, mowing and rubbish.

She has also been more nuanced about criticising the government’s COVID-19 response than Mr Coe, who got into trouble when being too strident about what was public health advice.

Rates – that other element of the local council trifecta – is also an area where the Liberals have given themselves more room after being locked into the anti-reform camp for election after election only to be outmanoeuvred by Mr Barr.

Ms Lee wants a ‘fairer’ rates system, but will look to further policy development and the community to arrive at a more tenable position than at the last election when Mr Coe got into an economic tangle.

Mr Coe’s instincts about the direction of housing in the ACT were essentially right, but he allowed himself to be painted as a proponent of urban sprawl and wrecker of the environment rather than an advocate for young families wanting their own patch of dirt and not an apartment.

This is probably the defining debate for a growing ACT, a jurisdiction with a narrow tax base and its only currency being the land. Can the Liberals provide a viable alternative to the Labor-Greens government’s 70/30 approach for new developments, change the mix and release more land for greenfield estates?

With house prices through the roof and more people being channelled into apartments, they sense a genuine appetite for a different vision.

The Liberals also produced its own strategy for ACT schools, building on growing evidence that performance is slipping and zeroing in on parent concerns.

That in itself showed they want to be more than just a critic, but rather a contributor in the big policy areas.

Ms Lee can look back on the year with some satisfaction that her party has made progress with a united team, greater work ethic and more acceptable image. Part of that has been healing relationships with the media, which fell away under Mr Coe.

By the end of 2022, the ACT will be into the second half of the electoral cycle, and the Liberals will need to deliver some serious policy work that will chart the course to the next election and give voters something serious to think about.

So having successfully changed direction, Ms Lee will now need to consolidate and start looking at how she might actually govern.

But for all the improvements, the Canberra Liberals have still got a mountain to climb.

The big sleeper issue in ACT Politics in the debt/deficit issue. With Barr’s baked in deficits and no fortuitous revenue sources on the horizon there is some big hurts coming to your wallets some day1

Merlin the wombat has more media appeal than the Canberra Liberals.

Nope, Zed still runs the party and is enormously popular with members otherwise he wouldn’t be there along with return of key supporters like Cziezla to internal party leadership despite a long track record of failure, mediocrity, and a hollowed out party of angry people and Murdoch talking points.

Personally, I thought Jeremy Hanson had better standing in the community that Mr Coe ever did. His election to the leadership of the Canberra Liberals almost guaranteed their loss at the last election.
A party leader needs to be seen as a leader; someone who will publicly stand up to and challenge the government. Someone who can hold the attention of the media.
To me, Elizabeth Lee doesn’t seem to meet this criteria. She comes across as close to the government and not someone who wants the job of Chief Minister.

The 2021-22 budget predicts Net Debt of $9.6 billion in 2024-25, which would be 138% of predicted revenue of $6.9 billion that year. The next election will be 2024, so let’s see if the ACT Liberals can put forward some policies that will chart the ACT out of debt. Interest rates won’t stay low forever, so we should reduce debt before they rise.

She may as well form a coalition with Labor and marginalize the Greens.

I hope this is more than just a re-badging and marketing exercise. We’ve had a gutful of marketers in this country.

If this is a genuine move, then she’s in with a chance, as it’s time for the other mob(s) to be sent packing.