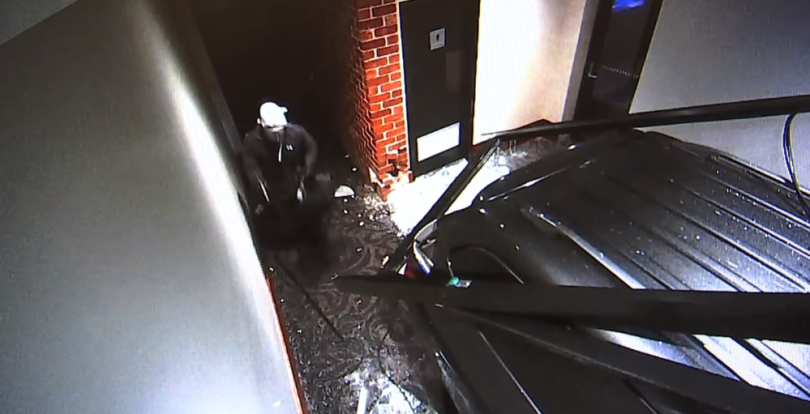 A Canberra man has been arrested for his alleged involvement in a ram raid at Hotel Queanbeyan last November and will be extradited to NSW.

Around 12:30 am on 15 November 2018, a utility believed to have been stolen smashed through a hotel on Crawford Street. A man exited the vehicle before firing a shot and threatened staff.

He stole a sum of cash and fled the scene in the same vehicle.

Following extensive inquiries, strike force investigators with the assistance of AFP officers arrested a 42-year-old man in Canberra around 2 pm on Thursday (11 July).

Detectives investigating an armed robbery at a licensed venue in Queanbeyan have released CCTV vision in an appeal for public assistance.Just before 12.30am on Thursday 15 November 2018, a utility, believed to have been stolen, smashed through a hotel on Crawford Street and a male exited the vehicle, armed with a firearm.The male fired a shot and threatened staff before stealing cash and fleeing the scene in the utility.No one was physically injured.Detectives from the State Crime Command’s Robbery and Serious Crime Squad and Monaro Police District commenced an investigation under Strike Force Corryong.As their inquiries continue, detectives have released CCTV footage from inside the venue and of a vehicle to appeal for information that may assist investigators.The vehicle depicted in the vision has been described as a dark grey Mitsubishi Triton utility with ACT numberplates YHP50E.Robbery and Serious Crime Squad Commander, Detective Superintendent Daniel Doherty, said it was sheer luck that there were no serious injuries in this robbery.“Investigations into this brazen robbery are continuing to not only arrest those involved but to also prevent harm being inflicted on an innocent member of the public,” Det Supt Doherty said“Crime can have a lasting impact on a victim; whether it be physical injuries or psychological trauma.“One of our greatest assets is the community and the information they provide. We are urging anyone who can assist us in identifying those involved, and help to put this thug behind bars, to come forward.”Anyone with information that may assist Strike Force Corryong investigators is urged to contact Crime Stoppers: 1800 333 000 or https://nsw.crimestoppers.com.au. Information is treated in strict confidence. The public is reminded not to report crime via NSW Police social media pages.

Detectives will extradite the man from the ACT and he is expected to be taken to Queanbeyan Police Station later today to assist investigators with their inquiries.

Investigations under Strike Force Corryong are continuing, and detectives are still seeking a second man in relation to the incident.

Anyone with information that may assist Strike Force Corryong investigators is urged to contact Crime Stoppers on 1800 333 000 or via NSW Crime Stoppers website.

Information is treated in strict confidence.

Capital Retro - 7 hours ago
Where does CBR get its income from? View
chewy14 - 9 hours ago
JC, There's 4 comments, who's this mythical blue glasses brigade whatever that's supposed to mean? And I can't see where anyo... View
News 25