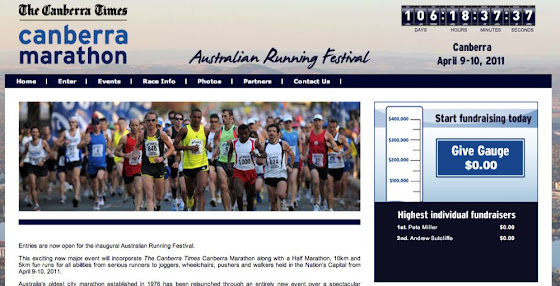 Word has arrived that Fairfax is backing the Canberra Marathon which will form the centrepiece of a suite of running events in April next year including a half marathon, 10K and a 5K distance.

The events will be held as part of the Australian Running Festival – a new event sponsored by the ACT Government.

The new Canberra Marathon website states that CSM has, ‘moved on to focus on other international opportunities’, while a link to the ‘new YMCA of Canberra Runners Club’ takes you to the old ACT Cross Country Club website. Interesting.

Fairfax Events are the highly successful organisers of the largest running event in the world, the City 2 Surf – although their record took a hit in 2009 when participants in the Fairfax Events Canberra Times Fun Run waited half an hour at the starting line because the water truck was late.

The launch of an Australian Running Festival in Canberra next year is an extremely exciting development on the local athletics scene. It is also a significant achievement for the ACT Government as it seeks to attract large events to celebrate the Centenary of Canberra.

The Canberra Marathon has real potential as a tourism drawcard because the course is nice and flat and a reasonable finish provides entry to other sought after international marathons.

If you are thinking of running the marathon for the first time and you are not already a regular runner then you might want to think about the half or 2012.

Daniel Pickering - 46 minutes ago
Legend. Taught me at Melba high back in the day. A great mentor! View
Ramon Montero - 3 hours ago
I do remember him when started arbitrate football, indeed very polite and educated a young person. I had the privilege to mee... View
Kacey Butterworth - 14 hours ago
I feel extremely privileged to have had Ben as a mentor, teacher and year co-ordinator throughout my high school years. He ta... View
Community 41