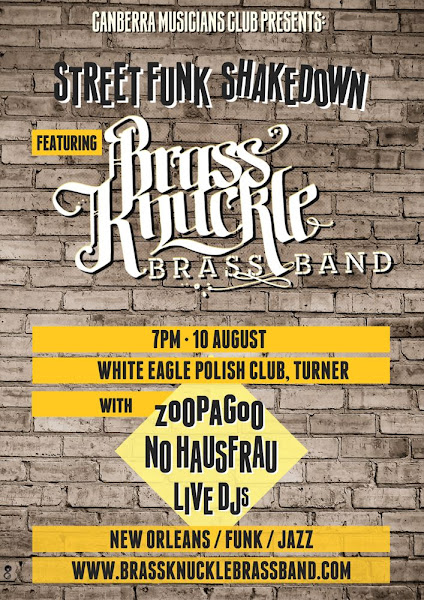 The Brass Knuckle Brass Band is back from its hard-eating, moderate-partying and tabasco-swilling tour of Queensland; it seeks once again to make Canberra fans dance around the Polish club in a jovial fashion. The Canberra Musicians Club was nice enough to facilitate this.

— NO HAUSFRAU – Some amazing bluesy jazzy folk to get you warmed up.
— ZOOPAGOO – Canberra’s finest purveyors of ’70s P-Funk style boogie will knock you back down.
— THE BRASS KNUCKLE BRASS BAND – Nawlins-style street funk brass group will put the boot in (in the nicest possible way).

The night will also include some of CBR’s best soul/funk/hip-hop turntable alchemists, who will be transforming cheap Polish beer into kinetic dancefloor energy.

We are giving away two double passes to Riot Act Paid subscriber – just email john@the-riotact.com to be in the running (entries close 5pm Thursday 9 August 2012).

Everyone else can attend for the less-than-princely sums below:

John Vallance - 5 hours ago
Lucas Anasdow um.... because like all vaccines it goes through testing. once testing and trials and results are reviewed then... View
Property 15

John Mungoven - 8 hours ago
Build trailer parks - US of A style. Fit more people in View
Paul Murray - 13 hours ago
Charles Godworth it’s coming from the Canberra Racing Club. They see the light rail as a great opportunity for them to make... View
News 4

Chris Vlahos - 8 hours ago
Should be built alot further back from the monaro highway for future road lanes and traffic expansion if need be. Esp with th... View
Opinion 20

Robert Morris - 10 hours ago
When will people in the ACT understand that our local Government has no interest in maintaining the bare minimum what they ar... View
Roderick Saunders - 12 hours ago
Avril Pounds the ability for residents to get pedestrian crossings etc installed does seem to vary for no apparent reason View
Avril Pounds - 12 hours ago
Lots of new speed humps around but not where my local school p&c have been begging for one for at least a few years now. View
Community 4

Courtney Matthew - 10 hours ago
Jason Matthew! These are those ladies I always see that wear red and purple and I always wonder what group they belong to! Av... View
News 26

Fortress Epiphany - 11 hours ago
Trevor Wilkins vets affairs were in there till about 3 years ago. View
Robert Knight - 12 hours ago
Jenny Gordon Avery it’s a great view up there! View
Archie Mac - 13 hours ago
It will always be MLC Tower to me. My family had the cleaning contract. We kids had great fun going up and down in the elevat... View
Community 8

Katy Did - 11 hours ago
I remember View
Community 39

@The_RiotACT @The_RiotACT
Hot in the City: Love gaming? Enjoy it with your food & your friends by your side at Reload Bar & Games https://t.co/i24LIWpdje (9 hours ago)

@The_RiotACT @The_RiotACT
Been looking for a large, quality family home in one of Gungahlin's most exclusive areas? This stunning residence could be all you’ve ever wanted + so much more https://t.co/lh17g6PgsK (10 hours ago)