Canberra Rep to bring us Lost in Yonkers 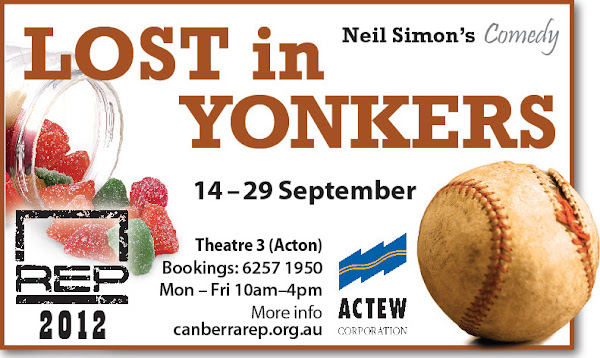 This in from Canberra Rep:

The fifth production for Rep’s 2012 80th Birthday season is Neil Simon’s Comedy Lost in Yonkers. Opening on 14 September the production continues until 29 September at Theatre 3, 3 Repertory Lane Acton. Directed by Angela Punch McGregor this wonderful memory play is as heart-warming as it is funny.

Family—you can’t live without them, but sometimes moving in with them can be scary.

When Grandma Kurnitz’s two teenage grandsons are forced by circumstances to live with her for a year, the clash of generations and battle of wills teaches the whole family important lessons about duty, devotion, trust and love—all without losing their sense of self or sense of humour.
In addition to being one of Australia’s premiere actresses, Angela Punch McGregor has performed and directed on multiple occasions for Canberra Rep. She is now Senior Acting lecturer at Western Australian Academy of Performing Arts.