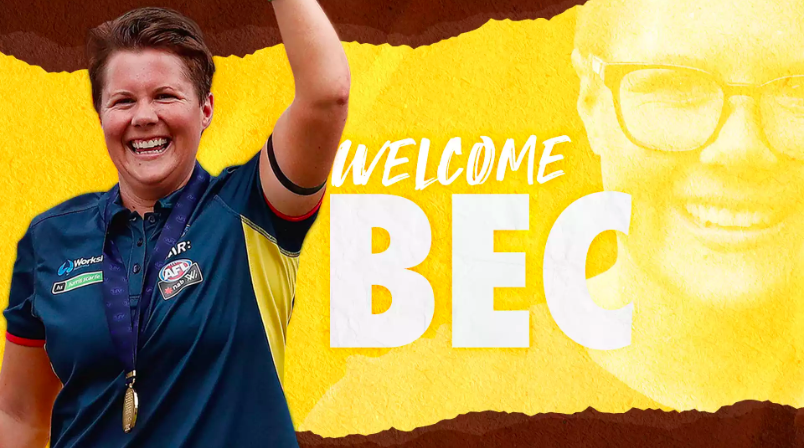 Bec Goddard has been a trailblazer for women in a range of sporting pursuits, including as coach of the Adelaide Crows women’s AFL team when they won the flag in the inaugural season.

She was also the first female field umpire in the North East Australian Football League, and the first female to be involved in the coaching structure at an NEAFL club. Bec was also an assistant coach with the UC Capitals when the team won their first WNBL title in eight years.

With this resume, you could assume that her pathway has been well and truly established for a full-time coaching role in a range of sports.

But up until now, that pathway has been anything but clear for Bec. A number of hurdles were apparent, including a reluctance from AFL clubs to appoint a female coach for their AFLW teams.

Those barriers have created frustration, but the determination to achieve that goal has never dissipated; if anything, it has fuelled her desire.

And finally, that perseverance has paid off with Bec today appointed head coach of Hawthorn’s VFLW team.

The aim now is to get a robust and successful program in place in readiness for Hawthorn’s admission into the AFLW competition.

As an added bonus for Goddard, she will be coaching at the very club she has long supported.

“To have another opportunity to coach football at an elite club, and to be joining the team I grew up supporting, is incredible,” Goddard says.

“She’s an accomplished and respected leader who will be able to impart incredible insight on our program,” Reeves says.

Although currently deployed overseas with the AFP, Bec will return home in mid-December before heading to Melbourne to meet the team. And a big year is definitely anticipated.

As Bec says: “It feels like I’m living a dream.”

Helen Topor - 24 minutes ago
Krystyna Topor a friend thought she was fainting (she was standing at the time). I thought that the shaking might be the begi... View
Anne Barnes - 31 minutes ago
While house shook in Shingle Hill Way Gundaroo View
Sally Asnicar - 45 minutes ago
My bum was plonked in my office chair as usual and I felt nothing. Zip. Nada. On Sydney's Upper North Shore. View
Opinion 13

Danielle Woodhouse - 26 minutes ago
Look at You Suzy! View
Robert Gannon - 2 hours ago
Foot in both camps , live in Wagga Wagga and Suzy is my niece 😎... View
Kelly Hitchings - 3 hours ago
Suzy Balogh there’s you xx View
News 103

@The_RiotACT @The_RiotACT
As part of Region Media, Riotact delivers news, views and information free to more than 700,000 unique readers every month. We've grown up with Canberra and now we are celebrating with a sleek new look https://t.co/kLK4zpxPwK (23 minutes ago)